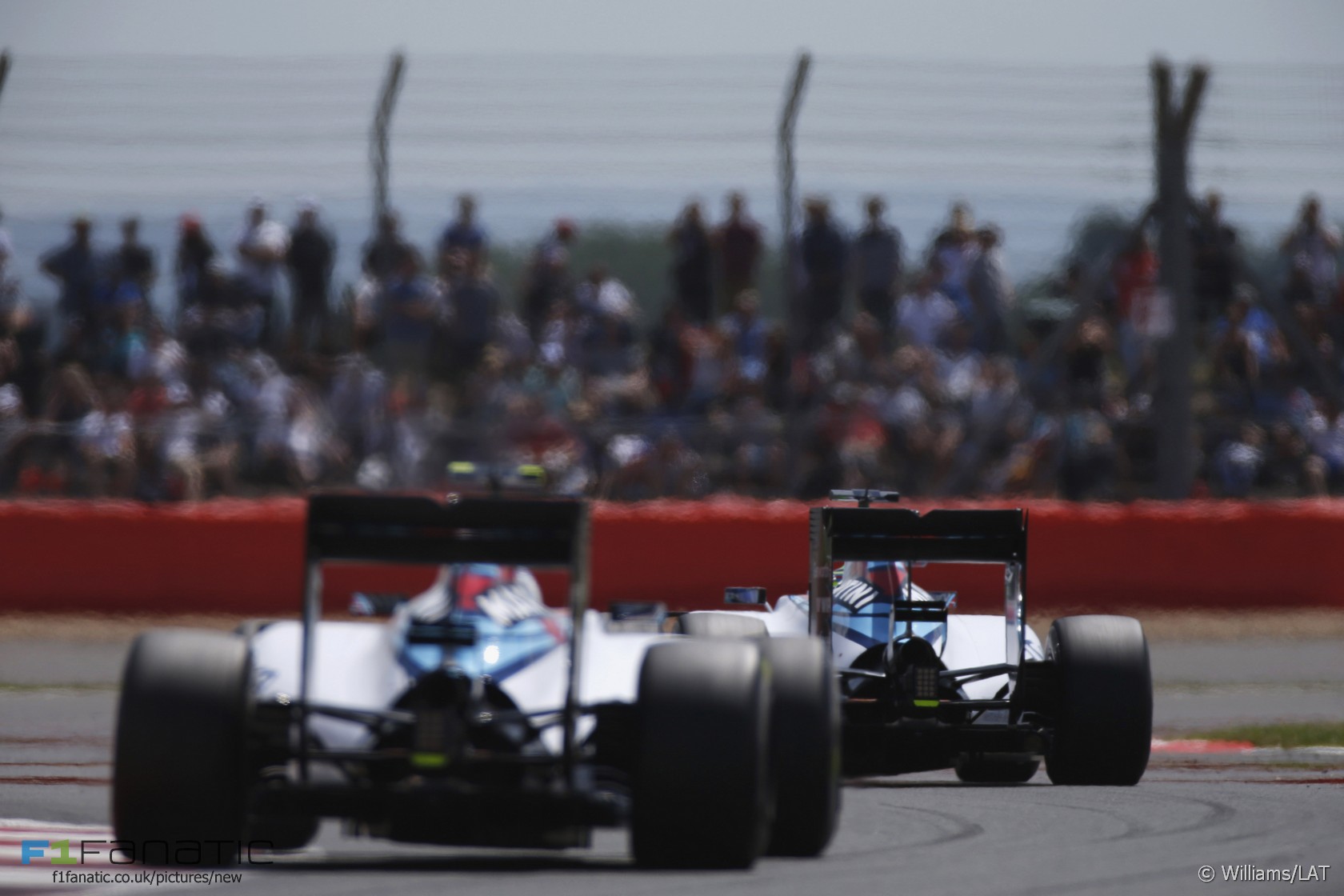 The British Grand Prix began with the unusual sight of the two Williams cars leading the field.

By the end Felipe Massa and Valtteri Bottas had slipped to fourth and fifth places. But could the team have had a stronger result had they managed their drivers more effectively at the beginning of the race?

Bottas repeatedly tried to overtake Massa during the first half of the race. He was unable to pass his team mate, and with Lewis Hamilton following close behind the Mercedes driver was able to jump past both of the Williams drivers at the first pit stop.

Had the race run its course without the rain shower that followed, this would have been a decisive moment.

It’s not the first time Williams have faced a tricky call over team orders with their current driver pairing. In Malaysia last year Massa was initially told to let Bottas past, but refused.

This time Bottas was initially forbidden from trying to pass Massa. However the pit wall then reversed its position, allowing Bottas to attack. However by the time they had done so he felt his best opportunity to get ahead had passed.

Here’s what was broadcast from the Williams team radio at this vital point in the race:

*Lap on which the message was broadcast on television

Afterwards Massa insisted he’d been quicker than Bottas, and his team mate had only appeared faster because he had the benefit of DRS. However Bottas had fallen out of DRS range at one point, but was able to close on his team mate again.

Should Williams therefore have let Bottas past? Should they have stuck to the original decision to tell them to hold position? Or was their eventual call to let their drivers sort it out between themselves the right one?

The most surprising thing about this episode was not that Williams originally forbade their drivers from racing each other, but that the pit wall changed the instruction. They can only have done this because they realised they were in greater danger of losing a position to the Mercedes through Massa holding Bottas up than through Bottas attacking Massa, slowing them both down.

Attempting to manage the situation ‘dynamically’, by giving one set of instructions and then revising them, doesn’t seem to be the best way of handling it. Bottas ended up telling his race engineer the change of policy had come too late. That probably cost him a chance to get ahead, potentially strengthening the team’s position.

For that reason, as well as out of simple fairness to their drivers and out of respect for their ability to race without hitting each other, I always prefer to see teams let their drivers fight for position.

How should Williams have handled the fight between their drivers at Silverstone? Cast your vote below and have your say in the comments.

How should Williams have handled Massa and Bottas?

121 comments on “How should Williams have handled Massa and Bottas?”