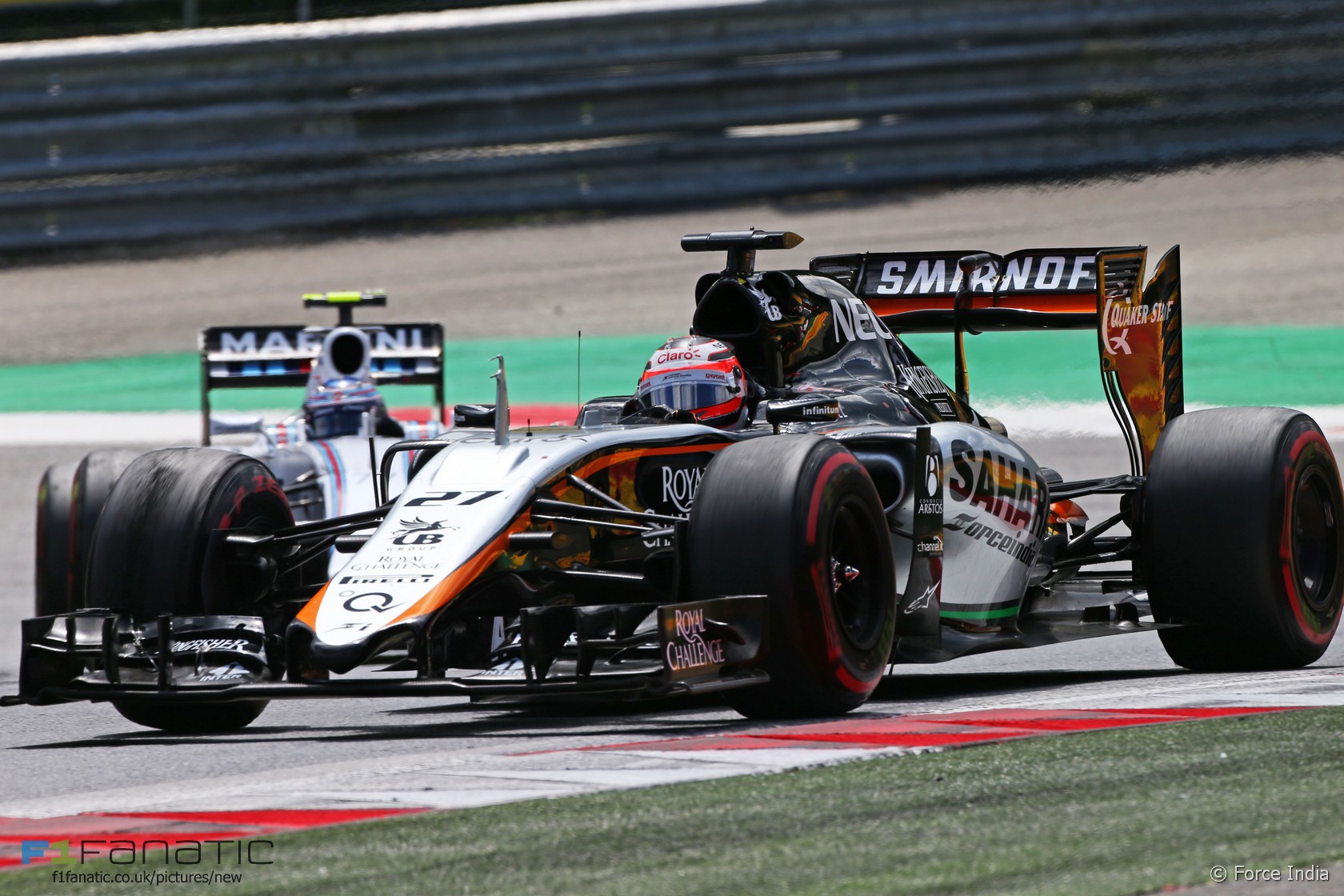 Off the back of his Le Mans 24 Hours success an inspired Nico Hulkenberg gave Force India their best finish of the year so far in Austria and won the Driver of the Weekend poll.

Force India has had a difficult start to the season with its VJM08 but in Austria the Mercedes-powered car looked a more competitive proposition. Hulkenberg was sixth in second practice, just half a second off the fastest time.

With the faster Williams of Valtteri Bottas behind, and none of the drivers ahead hitting trouble, improving on that position was always going to be a big ask. Hulkenberg gave it his all, however, and despite being passed by Bottas at one stage an early pit stop allowed him to briefly re-claim the place.

There was no denying Bottas, however, so Hulkenberg crossed the line in sixth place. Hulkenberg’s efforts, plus ninth place for Perez, moved Force India ahead of Lotus in the constructors’ championship. And it gives F1’s big teams a timely reminder of Hulkenberg’s potential.

Fifth in qualifying and sixth in a race is not where a Force India belongs. Easily Nico Hulkenberg this week.
@craig-o

Decided to go for Hulkenberg though, fifth in qualifying was outstanding. Managed to keep Bottas at bay for a good percentage of the race.
@conmcdonaghf1

Finally, Hulkenberg back in great form, showing both great defensive race craft and also just great pace in general. The star of qualifying, splitting the two Williams, which is quite clearly a faster car, and then in the race, holding off Bottas for what seemed like forever, and on top of that was so much faster than pretty much everyone else in similarly paced machinery. Not to mention he utterly destroyed Perez this weekend.
@philereid

Winners and losers in the Austrian Grand Prix It was a good weekend for the Nicos: race winner Rosberg also figured highly in your voting, although many felt his error in qualifying, which potentially cost him pole position – was too much to overlook.

Felipe Massa, Pastor Maldonado and Max Verstappen also polled well, the latter pair providing one of the race’s few highlights with their battle for seventh place..

Nico Rosberg. Overtook Hamilton at the start and pretty much dictated the race from then on.

A good opportunistic win and winning from second on the grid would give a lot of confidence for the rest of the season as well.
@Evered7

As it’s Driver of the Weekend I have to give it to Hulkenberg, Rosberg made a key error in qualifying.
@Juan-pablo-heidfeld-1

Verstappen got plaudits for another strong weekend, at a track where Toro Rosso should have struggled, and sister team Red Bull did.

To qualify seventh and finish eighth in a Renault-powered car on a power track is a superb effort.
@jamesjames123abc

Maldonado led Verstappen home after another solid drive from the much-maligned Lotus racer:

He really made it very exciting to watch, and was fighting clean.
@strontium

Massa also won a lot of praise, if not that many votes:

Massa for me. Flawless Friday and Saturday sessions, solid pace in the race, one more time made the most of his tires, and in the end managed to control a faster Vettel behind him.
AldoH

And though it was a weekend to forget for Kimi Raikkonen, Biggsy managed to find one reason to vote for him:

Must be Raikkonen: Not only drove the wheels off that Ferrari, but off McLaren, too!
Biggsy

15 comments on “Strong run wins Hulkenberg Driver of the Weekend”