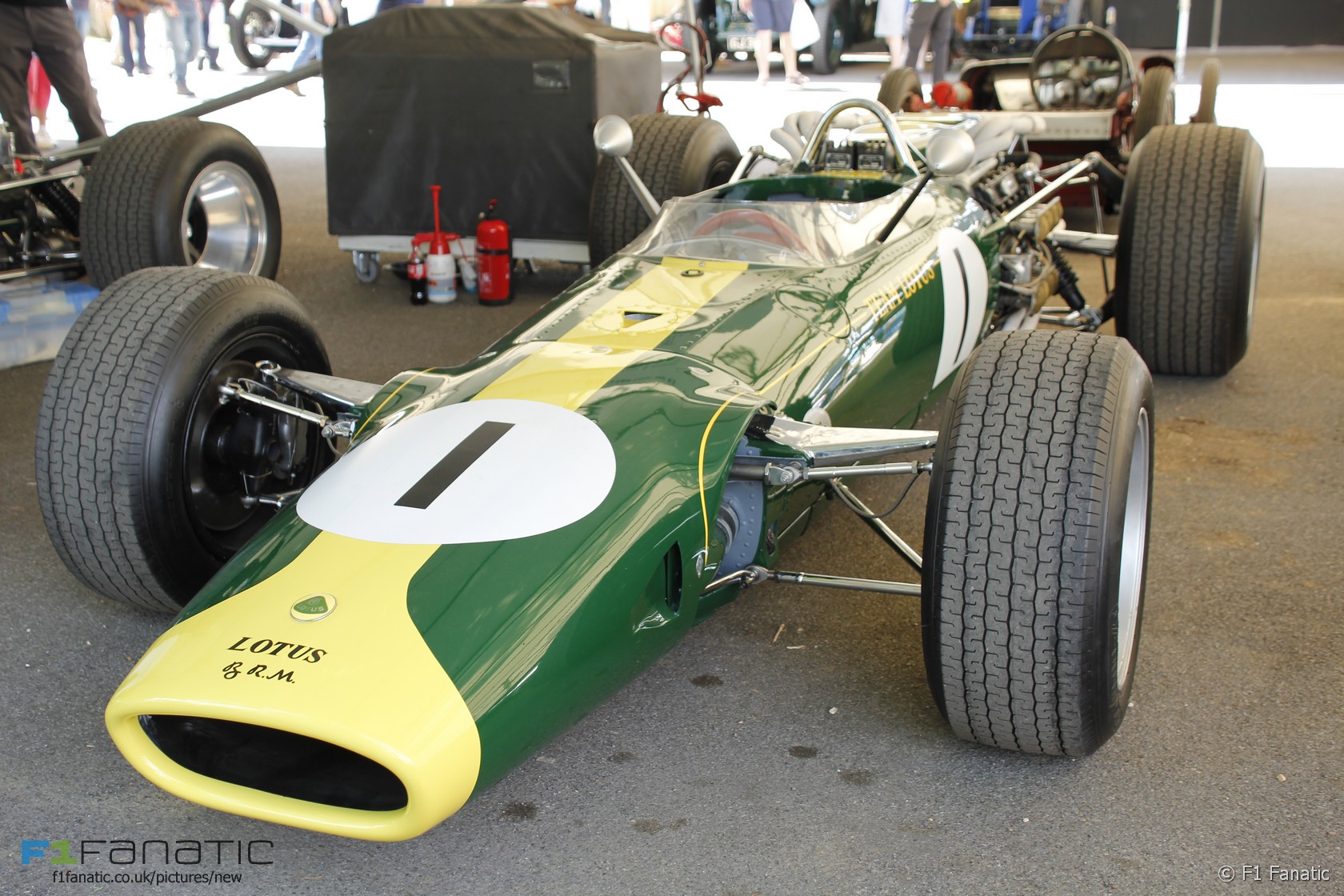 Today’s V6 hybrid turbos are rubbish, right? The V8s were much better.

Actually, no, the V8s were a bit pants. Now the V10s which preceded them, those were the real deal.

Taking this flawed logic to extreme, the ultimate in Formula One car technology might well be this: the only car to win a round of the world championship using a 16-cylinder engine.

Strange, you might think, to dedicate an entry to a car which only appeared in five Grands Prix.

Unusual too, that what makes this Lotus particularly interesting is not some technical wizardry pioneered by Colin Chapman, but its engine.

The Lotus 43 was the car that gave BRM’s unorthodox Type 75 H16 engine its only Grand Prix victory, in Jim Clark’s hands in the 1966 United States Grand Prix. The 16-cylinder beast was conceived in 1966 as a means of producing an power plant for F1’s new engine rules. After the 1965 season engine capacities were doubled from one-and-a-half litres to three.

BRM’s notionally simple solution was to bolt together the cylinder banks from two of its successful 1.5-litre V8 engines in an H-pattern to create a single 3-litre unit. The engine, designed by Tony Rudd, was raced by their factory team using its P83 chassis in 1966, and was also supplied to Lotus.

The Lotus 43 was based on the 38 which Clark had used to win the Indianapolis 500 the year before. The front portion of the car was much the same, behind which the H16 was bolted directly to the chassis and the rear suspension fixed to the engine.

This was an early example of an engine being used as a stressed member in an F1 car. It pre-dated the use of the engine this way in Colin Chapman’s Lotus 49, which is often credited with being the car which pioneered this approach with its Cosworth DFV engine*.

The enormous dimensions of the H16 practically forced Lotus 43 designer Maurice Philippe incorporate it as part of the chassis.

With two pairs of engine banks stacked on top of each other, the lower banks requiring exhausts that exited beneath them, the engine was cursed with an unappealling combination of high weight, a poor power-to-weight ratio, and a high centre of gravity.

Taken together the engine, gearbox and clutch tipped the scales at a whopping 305kg. This was the antithesis of the Chapman mantra: ‘simplify and add lightness’.

It did, however, produce one of the most dramatic and distinctive engine notes ever to wail from the back of an F1 car.

BRM and Lotus struggled with dire unreliability to begin with in 1966. So much so that the engine was not seen for a few races mid-season while work was done to improve the transmission.

At its return Clark showed a flash of promise in the Italian Grand Prix, running quickly when all 16 cylinders were firing properly, until the gearbox died ten laps from home.

At Watkins Glen the car ran well in practice and Clark took second on the grid. But his engine failed late in practice, prompting BRM to give Lotus their spare. The work to reattach engine to car went on up until the final moments before the start was given. Meanwhile Clark prepared to jump into the team’s spare car, with its Coventry-Climax two-litre V8, if the work wasn’t finished. Clark ran in fourth place in the early stages. For all its weight and complexity the H16 was estimated to be producing little more than 375bhp. But for once it was his rivals who hit trouble.

That promoted Clark into the lead. Against expectations, the glorious cacophony from his 16 cylinders never faded, and after 108 laps he crossed the line to score a historic win.

This was the one and only time Lotus’s H16-engined car finished a race. It appeared twice more: in the season finale in Mexico, and at the first race of 1967 in South Africa. After that it was replaced by a car and engine with half as many cylinders which enjoyed vastly more success: the Lotus 49 with its Ford-Cosworth DFV V8.

The best BRM managed to do with their own engine was second place for Jackie Stewart at Spa later that year.

Though it had become a race-winner, BRM’s H16 engine was not the future of F1 engine power. But the 16-cylinder monster deserves its place in F1 history as a tremendous and idiosyncratic creation, though one that probably would never have won a race without the genius and mechanical sympathy of Clark.

*There were other, earlier F1 cars which also used the engine in this way, not least BRM’s P83 mentioned above.

According to automotive historian Karl Ludvigsen (in his books Colin Chapman: Inside the Innovator and Ferrari: 60 Years of Technological Innovation), the first team to do this in F1 were Ferrari, with their 158 V8 which made its debut in 1964, with which Ferrari won the constructors’ championship.

Ferrari developed the concept after seeing how Vittorio Jano’s Lancia D50 incorporated the engine as a partly-stressed member, when they took over the cars and raced them from 1955.