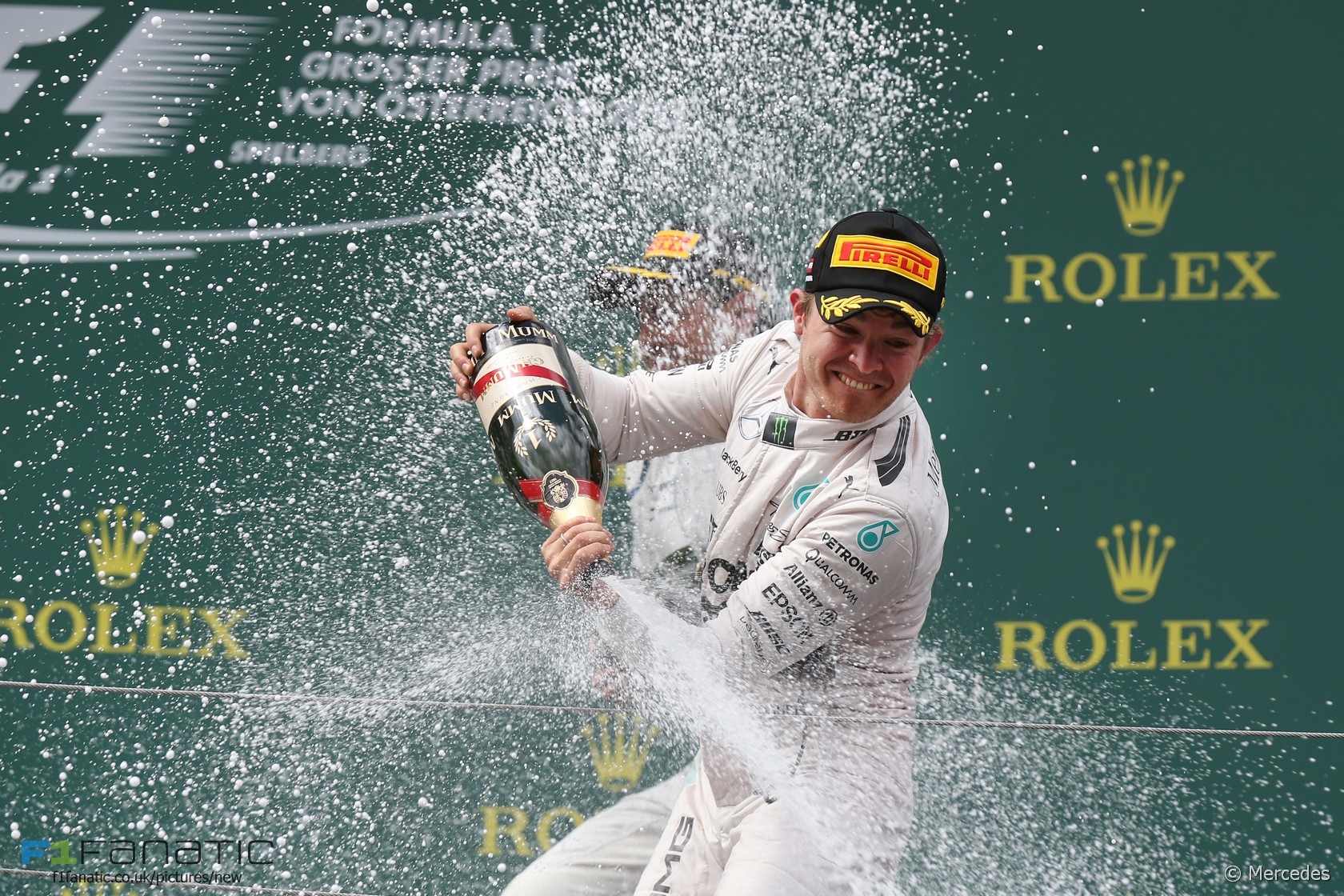 In Austria, Nico Rosberg finally did something he’d threatened to do since the season began but hadn’t quite managed: he took a win off his team mate.

Yes, there was Monaco, but that one fell into his lap after a strategic blunder. And in Spain pole position meant he started the race with the upper hand over Lewis Hamilton.

The significance of this result was its rarity in the content of the contest for the championship which has been fought almost exclusively between these two drivers since the beginning of last year. On several occasions in 2014 Hamilton came from behind to take victory off his team mate. Now that Rosberg has shown he can do the same, the finely-poised championship battle between the two suddenly looks a lot more competitive. Hamilton may have started the race from his sixth pole position in seven races, but this one had come against the run of play. He’d looked unsteady in practice, didn’t head Q1 or Q2, and spun off during his last lap in Q3. Fortunately for Hamilton, his team mate then went and did the same.

Twelve months ago at the same circuit Rosberg started brilliantly but couldn’t hold on to the place he gained on the long blast up the hill. This time he took the place and kept it – but Hamilton fought him hard.

Having beaten him to the apex of turn one, Rosberg guarded his advantage as they arrived at the second tight right-hander, picking his line with care to impede Hamilton’s acceleration out of the turn. Again Hamilton drew alongside as they arrived at turn three, and once more Rosberg judiciously positioned his car to thwart his team mate.

Now they were into the flowing middle part of the lap and Hamilton finally had to cede the place, tucking in behind his team mate. Just as he did that, the Safety Car lights began to flash. Back on the straight leading away from turn two Fernando Alonso’s McLaren was perched on top of Kimi Raikkonen’s Ferrari. The pair were unhurt, but how the fleet Ferrari had managed to tangle with a slower car which had started five places behind it was something of a surprise.

Raikkonen had been delayed getting away from the grid as Marcus Ericsson got away slowly having stopped his car after jumping the start. Pastor Maldonado was also slow to react, and as Raikkonen picked his way around them Alonso was making up ground on the outside.

Then at the exit of turn two Raikkonen, running the harder soft compound tyres, appeared to lose control of his car, collecting Alonso’s as it snapped left. Alonso had been penalised for spoiling Nico Hulkenberg’s race with an error on lap one in Monaco, so it was something of a surprise to see the stewards issue no sanction for Raikkonen despite him ending Alonso’s involvement in the race.

It was an elimination McLaren did not need, as they have a hard enough time finishing races under any circumstances. Shortly after the race resumed a fault developed on Jenson Button’s car.

“Nothing was broken on my car,” he explained, “but something was wrong – and the switch-changes didn’t make any difference. So the team took the decision to retire the car – we’d fitted a brand new engine this weekend, and we didn’t want to unnecessarily damage it, so we decided to stop.”

Button’s precautionary stop made him the race’s fourth retirement. Will Stevens’ Manor had ingested debris, damaging the radiator and causing an oil leak, and he was told to immediately pull over and stop the car.

After the Safety Car pulled in on lap six it quickly became apparent this was going to be a two-horse race at best. Ferrari had shown good pace in Raikkonen’s hands on Saturday, but as he had flat-spotted a set of super-soft tyres in that session, and gearbox trouble disrupted Vettel’s running, much of their running had been done on the soft tyre. Running on the super-softs at the start of the race, Vettel initially lost up to seven tenths of a second per lap.

Both Toro Rosso drivers had started well, Max Verstappen demoting Valtteri Bottas and Carlos Sainz Jnr gaining three places. Romain Grosjean tried to reclaim a spot from the latter but was rebuffed at the outside of turn three, and Sergio Perez grabbed the opportunity to make up a place.

Perez, the highest runner on the harder soft compound tyres, was losing around a second per lap compared to his team mate on the super-soft rubber. Anxious to regain his lost position, Grosjean ran wide in the last two corners of the lap, caught out by the new strip of artificial grass laid there before this weekend’s race.

Shortly afterwards his race engineer made the helpful suggestion that he overtake the Force India ahead of him, in case that hadn’t occurred to his driver. His frustrating race eventually ended with gearbox failure.

Soon Bottas was making a serious attempts to re-pass Verstappen. He got down the inside at turn two, and although the Toro Rosso driver lined him up nicely to get a run at the exit of the corner, Bottas had already triggered his DRS, and that put an end to the matter. Rosberg’s lead over Hamilton in the first stint peaked at 4.29 seconds on lap 25. Hamilton then began regularly chipping away at the gap. The Safety Car period had made the race a clear-cut one-stopper, and the time was approaching.

By lap 32 the gap was down to 2.2 seconds and there were signs Rosberg was beginning to ask too much of his ageing super-soft tyres. He ran very wide at turn two, locking his inside front-right tyre. He smoked his tyres again as he braked desperately late for the pit lane speed limit.

After a clean stop Rosberg rejoined the track just as Felipe Massa was passing by. Hoping he might get held up behind the Williams, Hamilton’s engineers kept their man out for another lap. It was a reasonable gamble – Massa was not under pressure from behind and could have stayed out longer. But he chose to come in on the very next lap, and with that went Hamilton’s slim chance of getting ahead.

As Hamilton headed for the pit lane exit Rosberg had already flashing past. What remote chance he had of coming out ahead was finished off when he strayed across the pit lane exit. This once would have meant a drive-through penalty costing him some 20 seconds, but the stewards instead chose to levy the more lenient five-second time penalty introduced last year.

In previous races Vettel might have been close enough to take advantage, but not today. For the second race running he was delayed by a slow Ferrari pit stop, and this time it cost him well over ten seconds and handed his third place to Massa. Vettel closed on the Williams at the end of the race, but not quickly enough to keep Massa from his first podium of the season. Behind Vettel, Bottas had to pass Hulkenberg twice to put a lock on fifth place. He got the job done the first time with a tidy move around the outside at turn three. But the Le Mans 24 Hours winner headed straight for the pits, was treated to the fastest stop of the race by his Force India crew, and crucially rejoined just ahead of Daniel Ricciardo’s Red Bull.

That meant when Williams took too long over their stop for Bottas, Hulkenberg reclaimed his position. It took until lap 35 for Bottas to regain his lost place, and by then his hopes of finishing higher than fifth were done.

Verstappen’s hold on seventh place slipped with two laps to go as his tyres began to fade. He was being pressed hard from behind by Pastor Maldonado, who at one stage nearly lost his Lotus at turn one, and then caught an even more lurid skid as he finally dodged past the Toro Rosso with his DRS open.

However a litany of misfortunes had wrecked the other Toro Rosso driver’s race. Sainz stayed out initially when he was called into the pits, as he was stuck behind Nasr and saw the Sauber driver make for the entrance.

But when Sainz did come in, his stop was slow. He then broke the pit lane speed limit, earning a penalty. And that became moot entirely when his car lost power. He had been running in front of Perez, who finished ninth ahead of Ricciardo – like Maldonado, both saved their super-soft stint until the end of the race.

Brake trouble hobbled Nasr for the second race in a row, while his team mate’s car cut out twice and he also had to serve a drive-through penalty for his jump start. Daniil Kvyat damaged his front wing on the first lap, pitted for repairs, but was still carrying some damage until he took the flag in 12th. “It was like hell,” he reported on the radio. Behind Ericsson, Roberto Merhi brought his Manor home 14th. In the final laps there were worried exchanges between Rosberg and his engineer as he reported a vibration that was “getting stronger” on his front right wheel. “All eyes on that,” he urged his team.

The problem, caused by graining, began to subside, but a cautious Rosberg eased off by two seconds on his penultimate lap. “It sort-of stabilised so it was not a problem,” he explained. “It just came from the tyre wear and just feels a bit uncomfortable when that happens.”

The second F1 race at the Red Bull Ring since its return was not much more memorable than the first, but Rosberg’s track record will give him little cause for complaint. At this stage in the contest last year he was leading Hamilton by 29 points.

Now he is ten behind, but on the strength of this performance he knows he can take points off Hamilton even if he doesn’t start ahead of his team mate. That is something he all too often failed to do last year, and it may open up an intriguing new phase in the championship contest.