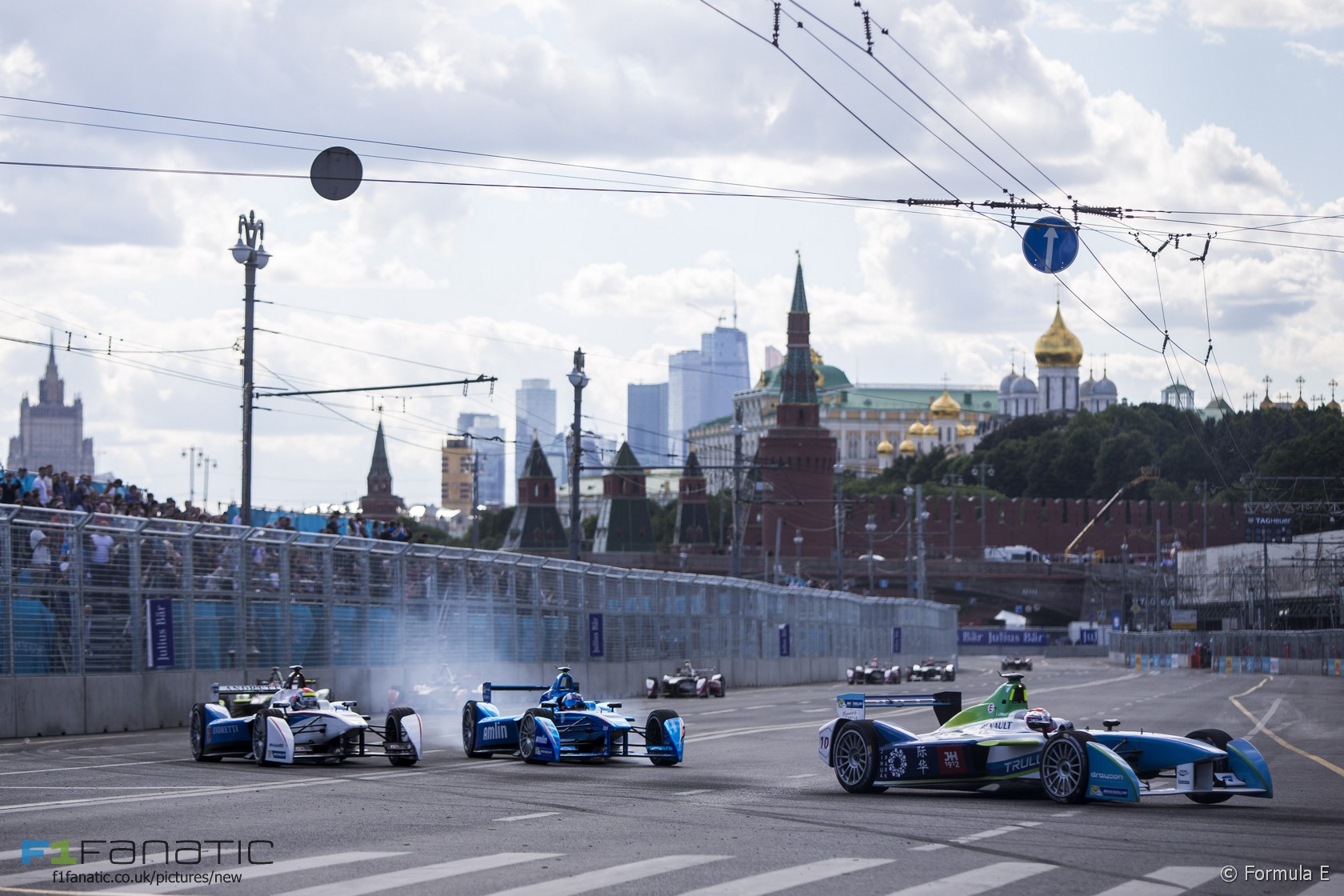 The first ever Formula E championship will be decided in the double-header finale in London in two weeks’ time following last weekend’s race in Russia. Six drivers will go into the final weekend with a shot at the crown.

Another FIA championship was also in action in Moscow – the World Touring Cars were back in action at Moscow raceway.

Elsewhere the World Touring Cars were also racing in Russia, the British version of the Championship at Oulton Park and Indycar had it’s second oval race of the season after the Indy 500.

Nelson Piquet Jnr took victory in comfortable fashion to extend his advantage at the top of the points table. Starting second, he overtook pole sitter Jean-Eric Vergne at the start, and used his energy to break from the pack to lead by nearly five seconds with 15 laps left. After the stops, the advantage meant he could conserve his remaining battery power to take the win.

Lucas di Grassi was second after managing an overheating battery after getting ahead of Vergne in the mid-race car change. Having fallen from pole to third during the race, Vergne lost two more place in strange circumstances on the last lap: Sebastien Buemi overtook him into the chicane but made to hand back the place after cutting the chicane. Vergne held back and Nick Heidfeld pounced, making an opportunistic move into the hairpin for fourth.

A major error by the DAMS team with the minimum pit stop time – which they believed was 68 seconds instead of 58 – had dropped Buemi into his rivals. Compounding his misfortune, a post-race penalty for an unsafe release relegated him to ninth and promoted Heidfeld onto the podium.

Piquet therefore extended his championship lead to 17 points over Di Grassi but there are 60 up for grabs in the two races to be held at Battersea Park in London. Buemi remains in contention, 23 points off Piquet. Nicolas Prost has an outside chance as he lies 46 points adrift of the points leader, as fo the more distant Jerome D’Ambrosio (51 points behind) and Sam Bird (60).

Some 100km away from the electric-powered action in Moscow’s city centre, the World Touring Cars were in action at Moscow Raceway.

Yvan Muller took his third win of the year in race one, beating team-mate Citroen driver Jose Maria Lopez by three seconds after getting the jump on the pole sitter at the start. Gabriele Tarquini took his Honda to third while Lada’s Vesta impressed at home, Rob Huff taking fourth. The highest independent driver was Tom Chilton who finished sixth in his Chevrolet.

While race one was rather processional, race two was a blockbuster. Tiago Monteiro and debutant Nicky Catsburg shared the front row, but Norbert Michelisz immediately demoted the newcomer as well. Ma Qing Hua also started well, and his Citroen team mates scrapped furiously as the race developed.

Lopez got the upper hand on Muller but was judged to have jumped the start so had to take drive through penalty, dropping him out of the points. From seventh on the grid Huff relegated Ma, Hugo Valente and Catsburg in two laps to take third place. He then spent the next seven laps catching the leaders, eventually getting past Michelisz with a small amount of contact, but couldn’t catch Monteiro. Catsburg and Tarquini’s dice for fourth place ended in contact which put the Honda driver out with suspension damage.

Monteiro crossed the line first ahead of Huff, Michelisz, an impressive Catsburg, Ma and Muller. But despite his first winless weekend of the year, Lopez retains a 35 point lead over Muller in the championship.

A Penske one-two-three on the grid, a Ganassi one-two in the race. Scott Dixon won his second race of the season at Texas ahead of team mate Tony Kanaan.

In sharp contrast to the previous round in Detroit the caution flags only flew once – a mid-race interruption to remove debris. That resulted in the fastest ever winning speed at Texas – a blistering average of 308.898kph (191.94mph).

Throughout the race there were 14 lead changes between nine different drivers. Helioe Castroneves completed the podium, points leader Juan Pablo Montoya was fourth and pole sitter Will Power could only manage 13th

Yu Kanamaru took his maiden EuroFormula victory in race one, winning by less than a second over front-runner Vitor Baptista. The Brazilian took pole by over half a second, but the Japanese driver took to the front on lap eight after Baptista made a mistake.

Championship contender Konstantin Tereschenko was seventh in race one but made amends next time out with victory. Kanamaru also started race two from pole but almost stalled his car at the start, falling to seventh. Tereschenko took the lead at Farm with Baptista moving into second. Despite a tight battle in the closing laps Tereschenko hung on for his fourth win of the year, and now heads Baptista by eight points at the head of the table.

After a lack of action on Oulton Park’s classic International Circuit last season, the BTCC reverted to using the Island layout this year.

Jason Plato dominated race one from pole position, also taking fastest lap, although the race came to an early stop after an incident involving Alex Martin and Stewart Lines left the latter striking the pit entry wall sideways, though thankfully saved by the foam barriers.

Plato’s fastest lap gave him race two pole and despite maximum ballast he resisted pressure from Gordon Shedden to win again. An unusual incident occurred on the final lap when Andy Priaulx got too close to BMW team mate Rob Collard in an audacious move around the outside of the hairpin, badly damaging both cars.

Thanks to the reverse grid process for race three, Adam Morgan was promoted to pole position and looked likely to repeat his Thruxton race three victory, only for a drive through penalty for jumping the start to scupper any hopes. Matt Neal inherited the lead but two uncharacteristic errors allowed Sam Tordoff and then Andrew Jordan through to the top two places, with the former claiming his first win of the season, and first for his new BMW team.

For the third race in a row Martin Truex Jnr led the most laps but this time he managed to lead the final one as well. He took his first win of the season at Pocono Raceway after trading the lead with reigning champion and points leader Kevin Harvick.

Harvick took a hard-fought second after fighting his way back through the field. Jimmie Johnson completed the podium after recovering from a puncture while Joey Logano was an impressive fourth after starting last and picking up a pit lane speeding penalty.

Michael Schumacher’s son Mick suffered a broken hand in this crash in the German F4 round at the Red Bull Ring, scene of the next F1 race:

The GT4 European Series was also in action at the Austrian track, but the second race was marred by this final-corner collision between race leaders Jorg Viebahn and Rosen Daskalov. Both drivers were taken to hospital after this violent crash, but neither was badly hurt.

Lewis Hamilton took his fourth F1 victory of 2015 in Canada – video highlights of this are not available yet.

Which of these races did you watch over the weekend? How did they compare to the Canadian Grand Prix? Let us know in the comments below.

This week it’s one of the most famous races of motorsport, as the Le Mans 24 hours takes place as the third round of the World Endurance Championship.

The World Rally Championship resumes in Italy, IndyCar heads north to race in Toronto, the Hungaroring hosts Formula Renault 3.5 and NASCAR heads to the Michigan superspeedway.

Which of these will you be watching – and what else? Over to you in the comment.