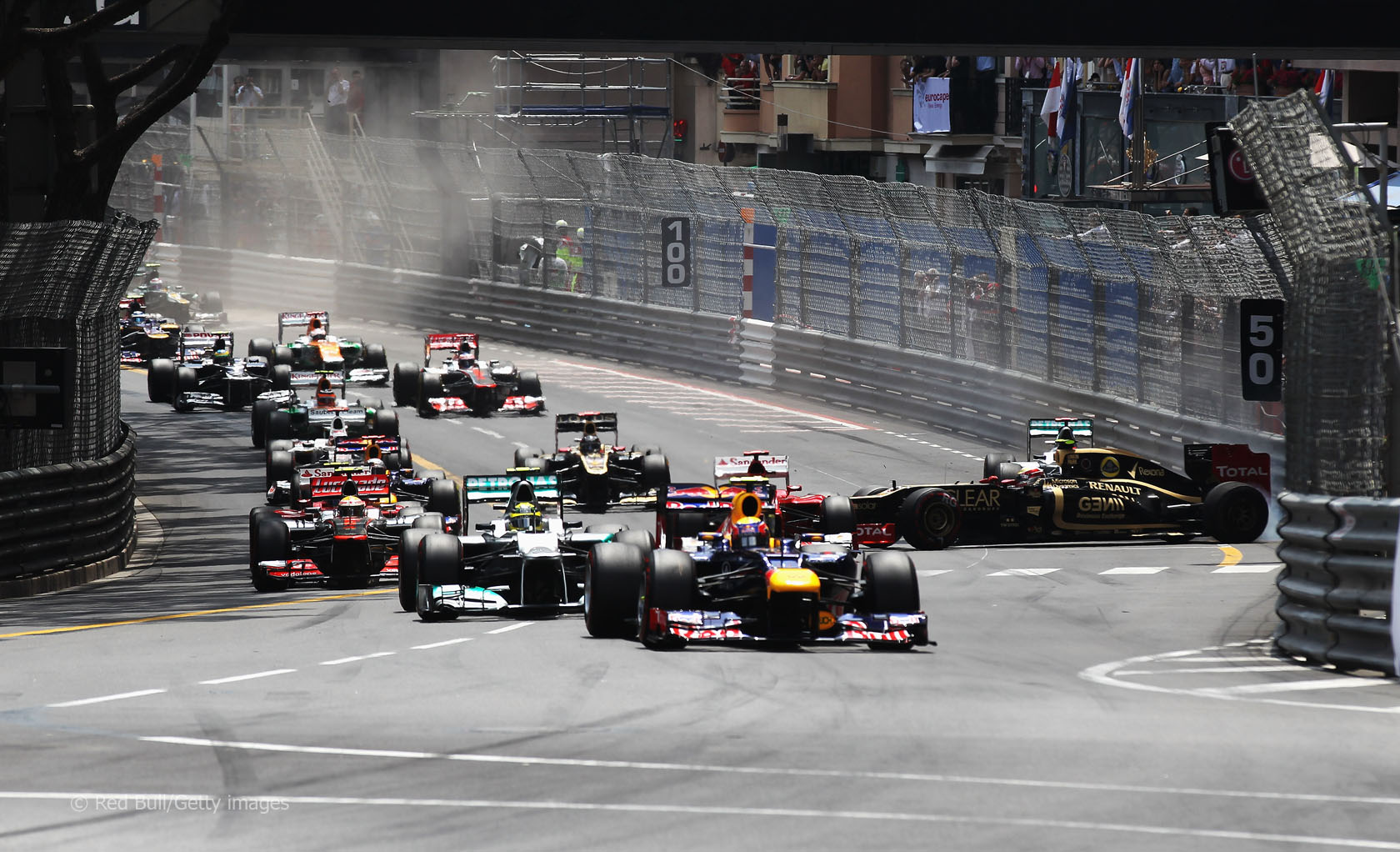 Monaco isn’t just the most prestigious race of the year – it’s also the most important qualifying session of the year.

Given how tight and narrow the track is, it’s no surprise that ten of the last eleven winners came from pole position. As recent years have shown, the run to the first corner is so short the pole sitter has to get it badly wrong to lose their advantage.

And for the rest of the field turn one is just a case of staying out of trouble in the first seconds of a gruelling race. There was no joy for the pole sitter in 2001. David Coulthard’s McLaren failed to get away on the formation lap in what team boss Ron Dennis memorably described a “brain fade” on Coulthard’s part before learning an electrical fault was responsible. Michael Schumacher therefore took the lead from second on the grid and went on to take Ferrari’s most recent victory at the principality. The most recent example of a pole sitter losing the lead at the start was 13 years ago. Having let him down 12 months earlier, Coulthard’s electronics made amends as McLaren’s superb launch control fired him past Juan Pablo Montoya’s Williams. He went on to win, and had the good grace afterwards to admit his start was all down to his superior software. Pole sitter Ralf Schumacher kept his advantage in 2003 but behind him team mate Montoya’s move past Kimi Raikkonen into second was decisive: Montoya pitted two laps later than Schumacher and jumped ahead of him, putting him on course for victory. Jarno Trulli kept his advantage from pole position in 2004 and was on his way to his sole grand prix victory. Behind him the other fast-starting Renault of Fernando Alonso slipped past Jenson Button for second place, but Alonso later crashed out of the race while pursuing his team mate through the winding Monte-Carlo streets. There were no such dramas for Alonso in 2006 – at least not on Sunday. The day before he had been awarded pole position after Michael Schumacher was stripped of the fastest time when the stewards judged he had intentionally stopped his car at Rascasse in an attempt to delay Alonso. Schumacher was sent to the back of the field, but others’ retirements and a timely mid-race Safety Car period helped him to salvage fifth place. Alonso led from pole position again in 2007, though new team mate Lewis Hamilton was unhappy at being fuelled more heavily for qualifying. Further back, Takuma Sato and Spyker duo Christjan Albers and Adrian Sutil cut the first corner but avoided a penalty. The new KERS hybrid was expected to give Raikkonen a boost from second on the grid as neither of the Brawns in front or behind him had it. But it didn’t work out that way: Rubens Barrichello beat Raikkonen to turn one, and Button beat everyone to victory.

Alosno and Michael Schumacher lined up fourth and fifth in 2011 but came round at the end of lap one separated by five cars – a slick start by Alonso got him past Mark Webber’s Red Bull, while Schumacher got away poorly and was swamped on the run to Sainte Devote. The 2012 start was carnage: Romain Grosjean was pinched between Alonso and Schumacher, sending the Lotus driver spinning into the path of Kamui Kobayashi. Further back Pastor Maldonado ran into the back of Pedro de la Rosa. All four retired, Kobayashi doing so after limping on for five laps. Mercedes have locked out the front row of the grid in Monaco for the last two years, each time with Nico Rosberg taking victory from pole position. In 2013 Hamilton got his nose ahead as they approached Sainte Devote but had to yield to his team mate. The following year Hamilton was riled by his team mate’s hotly-debated incident at Mirabeau during qualifying, where his apparent mistake scuppered Hamilton’s final qualifying run. Rosberg held his advantage at the start, however, and Hamilton had to accept second best for a second year.