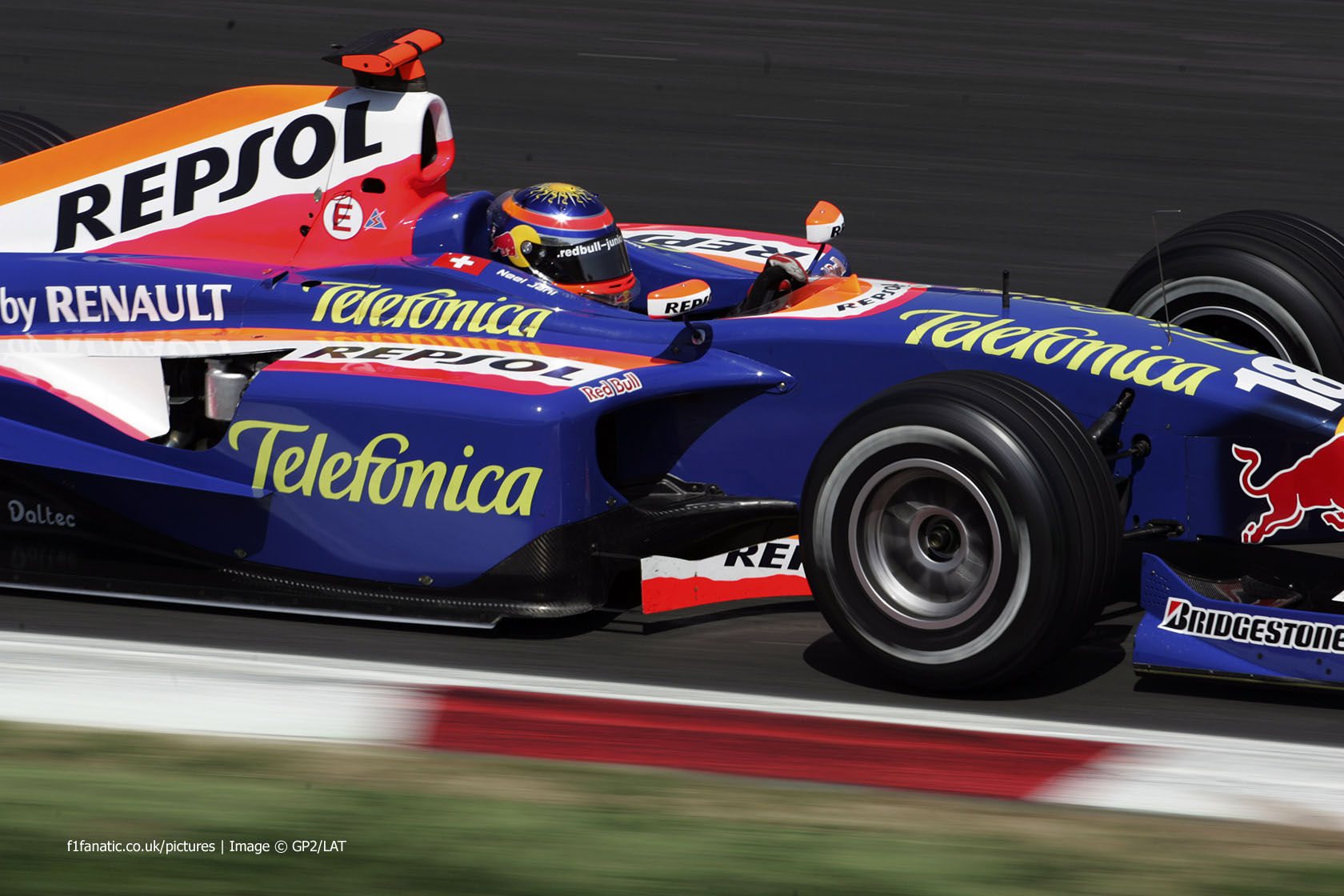 GP2 is celebrating its tenth birthday this year @SamVanPut is reviewing the careers of all the drivers who competed in F1’s feeder series without making it to the top.

France, 2012-2014, 43 starts, 1 pole, 1 wins, 4 podiums, 135 points
Arguably deserved more than his single win in the category. Dillman has begun to broaden his career beyond single-seaters with some success: He finished second in the Le Mans 24 Hours support race with RMS and last year came third overall with three wins in the Porsche Carrera Cup France. But he hasn’t given up on single-seaters and races in Formula Renault 3.5 this year.

Cyprus, 2014, 8 starts, 7 points
Having driven for Marussia in GP3 and been a test driver for them in 2013, Ellinas remains the only Cypriot to have driven an F1 car. In the Formula 2000 MRF Challenge during the 2013-2014 season he finished second overall scoring three wins and seven more podiums. That led him to GP2, and eight rounds in 2014 yielded a best of eighth, though he did score one fastest lap at Monaco. Without a GP2 seat for 2015 Ellinas, like Dillman, has moved to Formula Renault 3.5, where he drivers for Strakka.

Malaysia, 2005-2006, 2011, 61 starts, 5 pointse
Fauzy raced in GP2’s first season after scoring just one podium in the previous year’s British F3 season. In 2006 he earned a test driver role for Spyker, but it wasn’t until four years that he had the chance to drive in an actual F1 session. Now with Lotus, Fauzy became the second Malaysian driver to participate in the country’s grand prix, albeit only in practice, a duty he performed on several other occasions that year. In the intervening period he had raced in A1 Grand Prix and GP2 Asia, and in 2009 produced one of his best performances by finishing second in Formula Renault 3.5, winning once. His single-seater days seemingly behind him, Fauzy has recently competed in the Porsche Carrera Cup Asia and the Lamborhini Trofeo Europe, taking a sole podium.

Spain, 2005-2007, 43 starts, 2 podiums, 45,5 points
In 2005 Borja Garcia was a test driver Toyota and also competed in the inaugural GP2 championship, making two trips to the podium. The following year he was runner-up in Formula Renault 3.5, winning at Spa, But a return to GP2 the following season yielded little, and the same was true when he reappeared in the Renault championship in 2008. He also began driving in the football-based SuperLeague Formula, taking a win in 2008, and in 2012 he won the Spanish Endurance Championship winning half of the six races. The NASCAR Whelen Euro Series Elite became his home after that, and last year Garcia finished third overall in his second season. Italy, 2006-2012, 110 starts, 3 poles, 6 wins, 17 podiums, 198 points
Started more GP2 races than any driver but didn’t manage to bag the title. Filippi entered GP2 in 2006 and tested for Honda the following year. His GP2 career outlasted Honda’s F1 team, and a switch to Super Nova in 2009 saw him grab fifth in the championship. Following a partial 2010 campaign he returned the following year with the unfancied Coloni squad. Returning to Super Nova at mid-season he picked up three wins and pipped Jules Bianchi to second in the championship standings. He still wasn’t done with GP2, however, reuniting with Coloni again in 2012 for three more races and one more win. Filippi has also plied his trade in Auto GP – where in 2011 he matched his GP2 result of second overall with the same Super Nova team – and International GT Open. Having made his IndyCar debut last year, for 2015 Filippi is driving all the road and street circuits for CFH Racing. Netherlands, 2013, 12 starts, 1 win, 2 podiums, 47 points
European Formula BMW champion in 2010, Formula Renault 2.0 Eurocup champion in 2011 and Formula Renault 3.5 champion in 2012, an F1 graduation for Frijns seemed inevitable when he was picked up by Sauber for a test role. Instead he has become a case study of how talent alone cannot propel a driver to F1 at the moment if he does not also bring significant backing. This was also true in GP2, where a shortage of funds kept him from securing a seat at Trident. He landed at Hilmer and won his third race in the category before having to drop out at mid-season. A test deal at Caterham seemed a positive development at the beginning of last year, but the team collapsed before the end of the season. A DTM test for Mercedes also failed to lead to a move into that category, and Frijns now drives alongside Laurens Vanthoor in the Blancpain Endurance series. He is therefore likely to have too few superlicence points to qualify for an F1 seat next year.

Italy, 2013, 10 starts, 1 point
Competing in the last ten rounds of the 2013 season Ghirelli scored one point at the Italian race. He had a more successful year in Auto GP, winning the title, and returned to that championship the following year. He also raced in America, starting a handful of Indy Lights races and scoring a best of fourth in his first race at Saint Petersburg for Team Moore Racing.

Italy, 2013-2014, 10 starts, 0 points
Giovesi had some good runs in a year-old chassis in the European F3 Open series but his move up to GP2 seemed a bit hasty – sure enough, he failed to score any points. Giovesi started the first eight races of 2013 and the last two of 2014. Meanwhile he drove in Auto GP and finished sixth in 2013 and fifth in 2014, winning twice. In July 2014 he was announced as a part of Caterham’s driver development programme but never got behind the wheel of their F1 car before the team folded.

France, 2006, 9 starts, 6 points
The 2003 Macau Grand Prix winner made just nine starts for iSport in GP2 which wasn’t enough for him to make much of an impact. He finished fifth twice in Spain before moving to Champ Car in 2007. He took a pole position in his first season and ended the year 12th overall, but when the series merged with the Indy Racing League he was unable to find another seat. Gommendy returned to Europe and won three races in SuperLeague Formula before that series also closed. Gommendy now races sports cars and last year was sixth overall at the Le Mans 24 Hours and second in class. He’ll be back again this year and is also racing in the European Le Mans Series.

Venezuela, 2009-2012, 62 starts, 10 points
In 62 starts Gonzalez only scored points on three occasions, yet in 2010 he became test driver for Lotus. Further tests followed with the team in 2012 (now as Caterham) and Force India, and the following year with Marussia. While Gonzalez may have shown more funding than form in single-seaters, he has gone better with a roof over his head, finishing a class third at the 2012 Dubai 24 Hours and taking a podium finish in the ELMS last year.

Brazil, 2012, 17 starts, 0 points
Despite posting very average results in a mix of disciplines between 2009 and 2011, Guerin embarked on an ambitious programme of GP2, Formula Two, Auto GP and Brazilian F3 in 2012. The best he had to show for that was a single podium in Auto GP. More recently Guerin moved to the NASCAR Whelen Euro Series Elite in which he took a pair of podium finishes last year.

UK, 2008, 8 starts, 1 point
Headed to GP2 after finishing second in the 2007 Formula Renault 3.5 season. But while he managed to take a podium in the Asia series he couldn’t replicate that in the main category. Switching to the Euroseries 3000 and Superleague Formula represented a step back, although he did win races, and his career then took a surprising turn back to karts. In 2013 he finished second in four major events and last year he won the WSK Champions Cup KZ2. New Zealand, 2010-2012, 12 starts, 6 points
Once part of Red Bull’s junior team, Hartley didn’t get a shot at F1 with Toro Rosso but he did test for them and also had a run for Mercedes. Today he is aligned to a major German car manufacturer in a different discipline – Porsche’s World Endurance Championship team. He arrived there via a stint in the American and European Le Mans Series in 2012. He came seventh at Le Mans in 2013 and also competed in the Rolex Sports Car series, winning at Road America, and raced at the Bathurst 12H. He was signed up by Porsche on their return to sports car racing in 2014 and took a trio of podium finishes with team mates Mark Webber and Timo Bernhard. He remains part of Porsche’s factory squad this year.

Romania, 2008-2011, 70 starts, 1 podium, 13 points
One of few Romanians to compete at international level in motor racing, Herck won two junior championships in 2004 and a pair of regional F3 series the following year. But a lengthy GP2 career yielded very little, and since his last start in 2011 his racing career has come to an end.

Japan, 2007, 21 starts, 1 podium, 9 points
Retiring from eight of his 21 starts, Hirate only managed to score points on two occasions on GP2, though that included a podium finish in Valencia. In 2008 he moved back to Japan to race in Formula Nippon (now Super Formula) and Super GT500. He won the GT500 title in his sixth season in 2013 after finishing second the previous one. He failed to defend his title and only finished eight overall in 2014. He remains with Lexus for 2015 in GT500 and is now team mates with former F1 driver Heikki Kovalainen.

Brazil, 2008, 13 starts, 0 points
Following a point-less half-season in GP2 Iaconelli moved to Formula Two for 2009. During the 2008-2009 season he also drove two races in GP2 Asia. His first success came in 2010 when he made a switch to Auto GP, where he won the reverse-grid races at Imola, Spa and Magny-Cours on his way to seventh in the championship. Iaconalli went on to race in sports cars and low level NASCAR events, but now appears to have hung up his helmet.

Japan, 2014, 22 starts, 1 podium, 26 points
Coming from GT500 and Super Formula the experienced racer attempted a season GP2 with the backing of Honda. Without much success although he did score one podium at the Hungarian round. For 2015 the 30-year-old returned to his familiar haunts in Japan.

UK, 2010, 2 starts, 0 points
James Jakes only just makes it onto this list with a pair of GP2 starts to his name from his appearance as a substitute for Alvaro Parente at Coloni in 2010. He had spent that year racing in GP3, taking podiums in Turkey, Valencia and Germany. In 2011 he moved to the USA for IndyCar, and two years later took his best result to date with second at Detroit. Jakes remains in IndyCar this year Schmidt Peterson Motorsports. Switzerland, 2005-2006, 27 starts, 1 pole, 2 wins, 2 podiums, 48 points
Another Red Bull junior driver who didn’t get a crack at F1, Jani won at Hungary and Italy in the championship’s first season and ended the year seventh overall. In the off-season he contested another new championship, A1 Grand Prix, and took Switzerland to second overall. In the third season they were champions, but by then it was increasingly clear Jani had missed the boat as far as F1 was concerned. Jani made his Le Mans 24 Hours debut in 2009 and the following year joined Swiss team Rebellion alongside ex-F1 racer Nick Heidfeld. A series of strong results including fourth in 2012 caught the eye of Porsche, who signed him up for their LMP1 team last year.