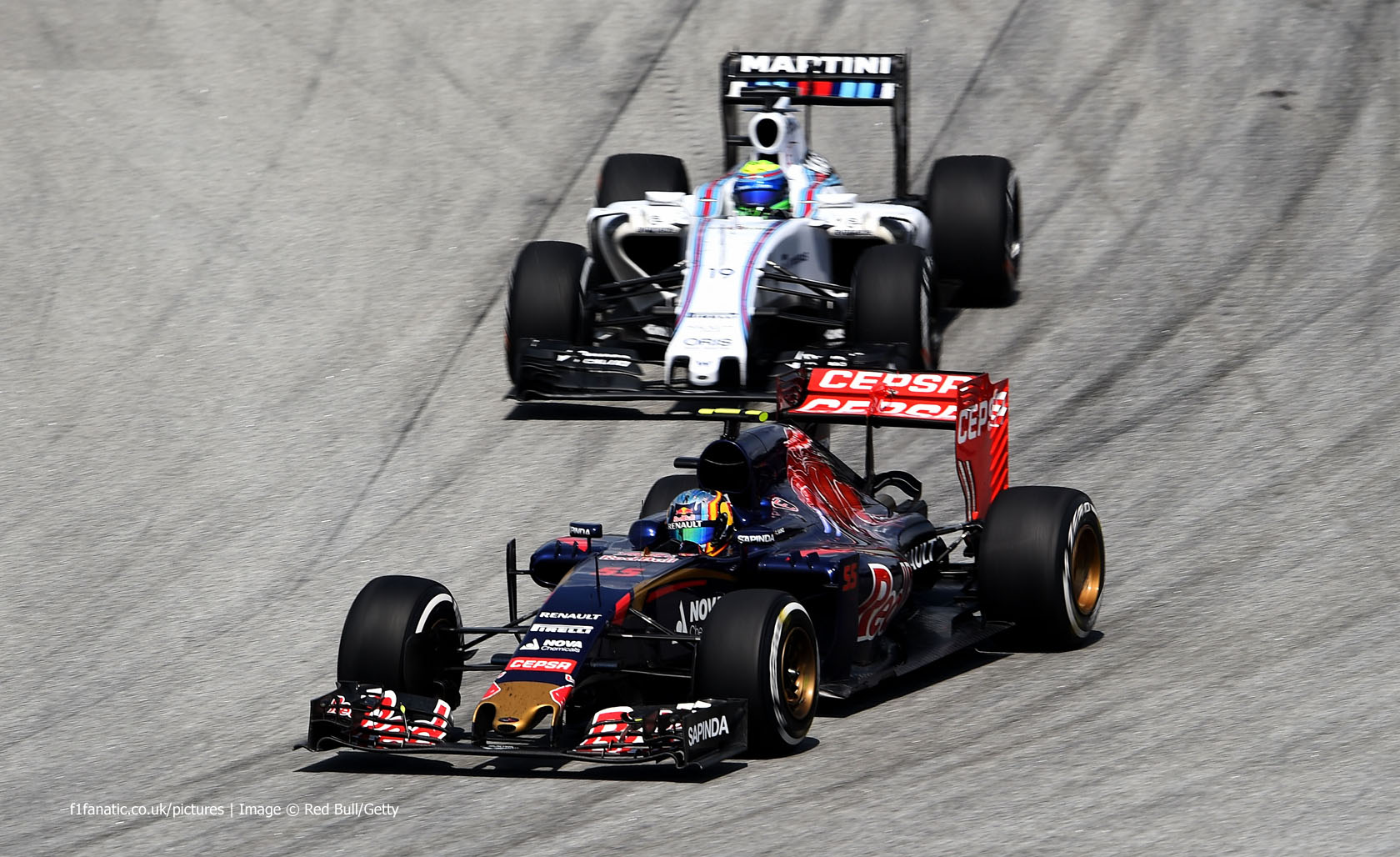 The memory of a disappointing start to the new season in Australia were quickly dispelled by an exciting Malaysian Grand Prix which produced a surprise winner.

Not long ago the idea of Sebastian Vettel taking a ‘surprise’ victory would have been difficult to comprehend as he brought the 2013 season to a close with nine consecutive victories. But his triumph for the rejuvenated Ferrari team was a promising sign Mercedes won’t have it all their own way this year.

This was the second-highest rated Malaysian Grand Prix since Rate the Race began in 2008, with only the 2012 grand prix scoring higher. Here’s what F1 Fanatic readers made of this year’s race.

The overwhelming sentiment was the Malaysian Grand Prix was much better than the first race of the year:

This was a nice riposte to those people who are complaining Mercedes are unbeatable. Ferrari’s strategy may have assisted Vettel but his drive was undeniably strong and he controlled the race, once he gained the lead. Vettel didn’t have to push towards the end, so he may have had something left in reserve. If so, that bodes well for the rest of the season.

Moreover, Raikkonen started well down the field, suffered an early puncture, yet he still fought back to an excellent fourth place. I believe Raikkonen was 41 seconds behind Rosberg at the end. If Raikkonen hasn’t lost so much time through having to pit, who knows how close he might have been to being on the podium. That also bodes well for the rest of the season.
@McKenzie

This really shows that at least the racing in F1 is still top notch, even if the politics still leave a malodorous stench. Horner can hardly call Mercedes’ domination out when they were soundly beaten today.
@Mouse_Nightshirt

With the exception of maybe Canada, this race was better than any of the 2014 and 2013 races. Although, the action dropped off at about lap 40, or whenever Vettel and Hamilton made their final pit stops. At that point it was clear Vettel was going to win. It’s a shame Rosberg didn’t catch Hamilton and fight him. Actually, Rosberg was a bit of a pushover this race. Hamilton was making quick passes while Rosberg was overly cautious.

I know there’s a lot of things wrong off of the track in Formula One, but for once I could watch a race without having to worry about any of that.
Michael Brown Not everyone was thrilled, however: the interference of the Safety Cars and some questionable penalties raised the ire of a few readers.

There was some nice jostling for position early on, before the second half of the race featured a really intriguing strategy battle. However saying that, the race did feel quite long, and except for Bottas’ awesome pass on Massa and Grosjean’s failed pass on Perez, I was rarely on my seat.
@Craig-O

There are a few aspects about this race that I disliked. There’s the fact that the Safety Car played a major role in the unfolding of the race. Sure, it was very clever of Vettel to stay outside and storm off in clean air. But the Safety Car meant that from this point, Vettel never had to fight Hamilton directly, and Hamilton never had to fight Rosberg. And that’s a shame, because there was a lot of potential for a thrilling battle between the three of them.

Also, the stewards’ decision to penalise Hulkenberg for a racing incident, in which he wasn’t even to blame, angered me quite a lot.

The third reason is the grid that again fell short of 20 entrants. I’m definitely not a fan of Bernie’s, but if Manor can’t fix a fuel pressure issue in 20 hours, they’re not F1 material. As a consequence, the grid fell short of my expectations again.
@Nase

There were a few great battles between the midfielders, but, it was more ended up with missed braking points, silly contacts or entering pits. A train appeared for a while, where there wasn’t any spectacular move or something like that.

Victory? Same again, nobody had a fight for the victory. Just a strategic battle between Ferrari and Mercedes, but the result was obvious from the beginning as Mercedes struggled to manage tyres on that hot surface all weekend long.

Nothing happened on track, (except Vettel’s dull move on Rosberg). Only two Mercedes and Raikkonen’s climbing after Safety Car was a little fun to watch, which we expect to see in a Formula 1 race. Nothing more.
BoRa (@Bnwllc3) Several readers suggested the race seemed better than it was because of the negative reaction to the Australian Grand Prix.

Wouldn’t go as far to say that it was a classic, what with the race for the win being pretty much over after the final stops, but still thoroughly enjoyable. Certainly, it’s exactly what Formula 1 needed after all the negativity following Australia. An exciting race and a genuinely close contest with a surprising (and popular) win, something which many of us never thought we’d see. F1 2015 looks a whole lot better now. A Hamilton/Vettel scrap for the title is a mouthwatering prospect. Let’s just hope Ferrari can match Mercedes at every race.

Reminds me a bit of Bahrain last year. One team boss complains about the sport all week, calling for urgent changes, only for us to witness a great race while that boss sees his cars scrap for minor points. Wonderful.
@JackySteeg

I am surprised that the race has received so many nine and ten ratings, everyone likes different things about grand prix but I wonder how much of the high ratings were because of what had come before it, the fact that the previous grand prix was very boring and it seemed that Mercedes were going to be even more dominant than last year coupled with the possibility that Rosberg may not put up as much of a fight to Hamilton this year.
@PJA

I think a lot of people are over-hyping this race because of Australia.
Patrick (@Paeschli)

The shape of things to come?

After two very different races, which set the tone for what will follow during the rest of the championship?

F1 still has all of the same problems it had two weeks ago so it’s important not to get too carried away, or blinkered to the fact that it’s still in crisis, but this race showed us that we can have competitive racing under the current regulations when it all works and the tyres don’t fall apart. I still have the same concerns about engine allocation and the silly DRS. I hope that this level of racing can carry on until the end of the season, but I doubt it can.
Andy (@Andybantam)

Maybe I am a bit biased as I was in the stands, but I thought it was a cracker…

Maybe 2015 will not turn out to be such a bad season after all. I still think that Hamilton will walk away with the title, but Vettel might take second away from Rosberg in the standings. The Ferrari at this rate might win more than two this year, which would mean we would see a Arrivabene running at full pelt in Maranello (his words, not mine). Kvyat, Verstappen, Sainz, Force India, as well as McLaren-Honda exceeded my expectations.
Mashiat Lam Gofran (@Mashiat2)

39 comments on “F1 bounces back with lively Malaysian Grand Prix”