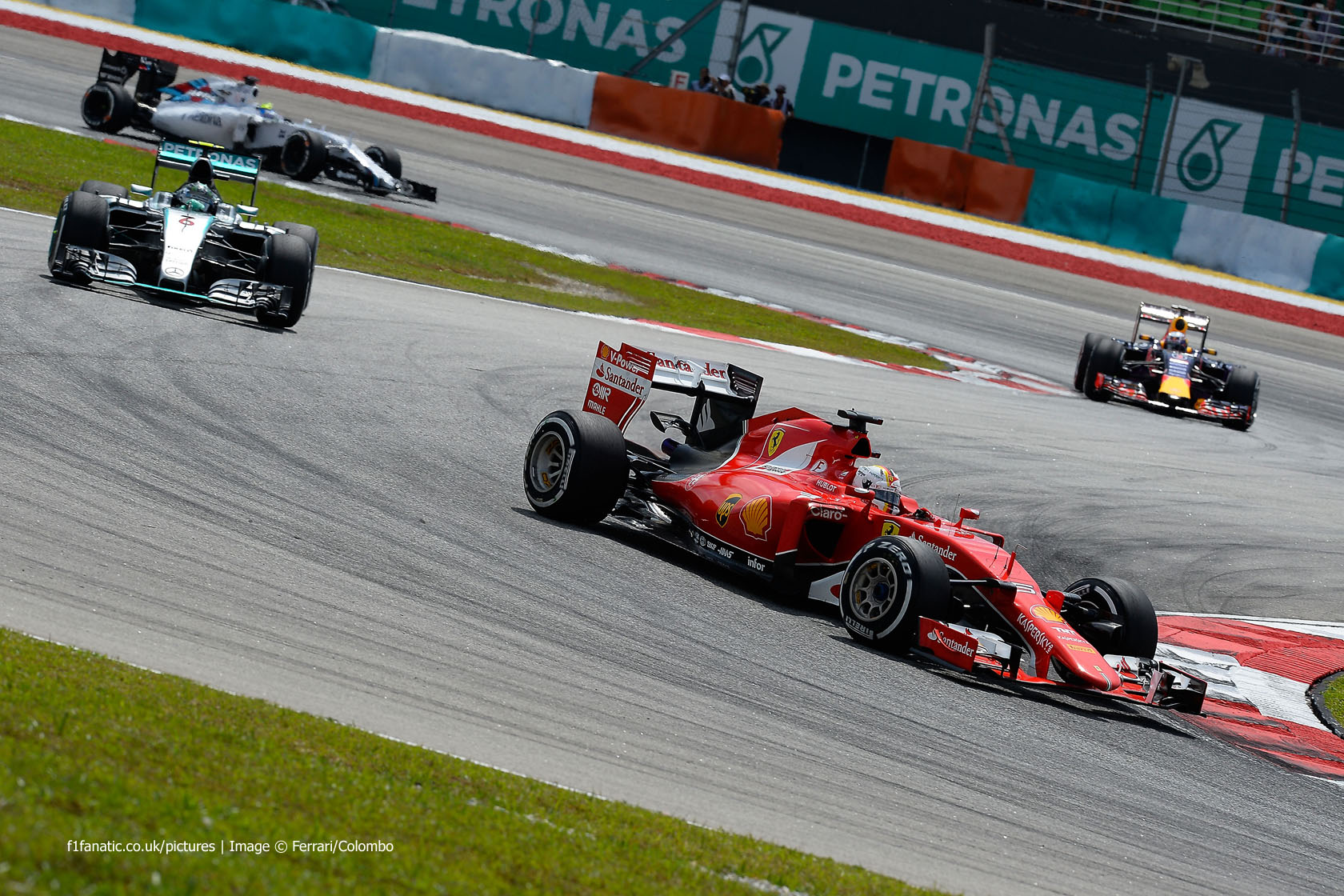 The Malaysian Grand Prix raised the exciting prospect that the previously dominant Mercedes may face serious opposition from at least one of their rivals this year.

But would Ferrari have triumphed over their rivals without the benefit of an early Safety Car period?

Both Mercedes drivers headed for the pits when the Safety Car came out on lap four while eventual winner Sebastian Vettel stayed out and took the lead. Was that what won him the race – or were Mercedes always going to lose this one?

After Mercedes thumped the field in Australia it was clear on Friday in Malaysia that Ferrari were in much stronger for round two – as they expected before the race.

The performance the SF-15Ts hinted at on the rough Jerez circuit during testing was borne out at Sepang, another tough track for tyres were temperatures reached punishing highs. The Sepang lap times shows this was borne out in the race: compared to Ferrari, the Mercedes drivers’ lap times rose too quickly too soon in the latter stages of each stint.

Had the Safety Car not come out Vettel would have been left trying to pass leader Lewis Hamilton on the track. In this scenario his superior tyre life would have given him the opportunity to pit earlier and attack Hamilton using the ‘undercut’, knowing he was better-placed than the Mercedes driver to tolerate the resulting longer stint afterwards. And he when the Safety Car came out he was already within a second of the Mercedes.

Whether or not Mercedes did the ‘right’ thing when the Safety Car came out, their position had already been compromised by their tactics in qualifying, which left them with one fewer set of the medium tyres. This arguably did at least much as damage to their chances of winning as did the appearance of the Safety Car.

Last year Mercedes did their first three stints on the softer medium tyre, then switched to the hards for a brief run at the end. The decision between the two tyres was more finely poised this time, and in the heat Mercedes believed they would favour the harder tyre in the race.

Instead they found an irate Hamilton asking them why he had been put back on the hard tyres for his final stint, and had to tell him that the set of mediums he’d used in Q1 weren’t fresh enough. Looking at Rosberg’s pace during that last stint when he was on medium tyres, if Hamilton had still had a set he would have caught Vettel and been in a position to pass him despite the earlier deployment of the Safety Car. This isn’t a case of whether Vettel ‘got lucky’ with the Safety Car, but whether the Ferrari had the raw pace to beat the Mercedes under normal racing conditions – and could do again.

Ordinarily when a Safety Car comes out the biggest advantage the leader loses is the margin they have already established over his closest rival. But Hamilton didn’t really have one, so that case can’t be made here.

There is also the point that Nico Rosberg’s race pace was marginally better than Hamilton’s, but because the team pitted both drivers under the Safety Car – obeying the principle of equality they adhered to last year – Rosberg was disadvantaged by having to queue behind Hamilton in the pits. In future they may have to sacrifice their equal treatment of the pair in order to cover off the threat from rival teams.

But given that Vettel already had track position over Rosberg, I think there’s a more than reasonable chance Ferrari could have won this even without the help of the Safety Car.

Do you agree Ferrari would have won in Malaysia without the Safety Car period?

91 comments on “Could Ferrari have won without the Safety Car?”