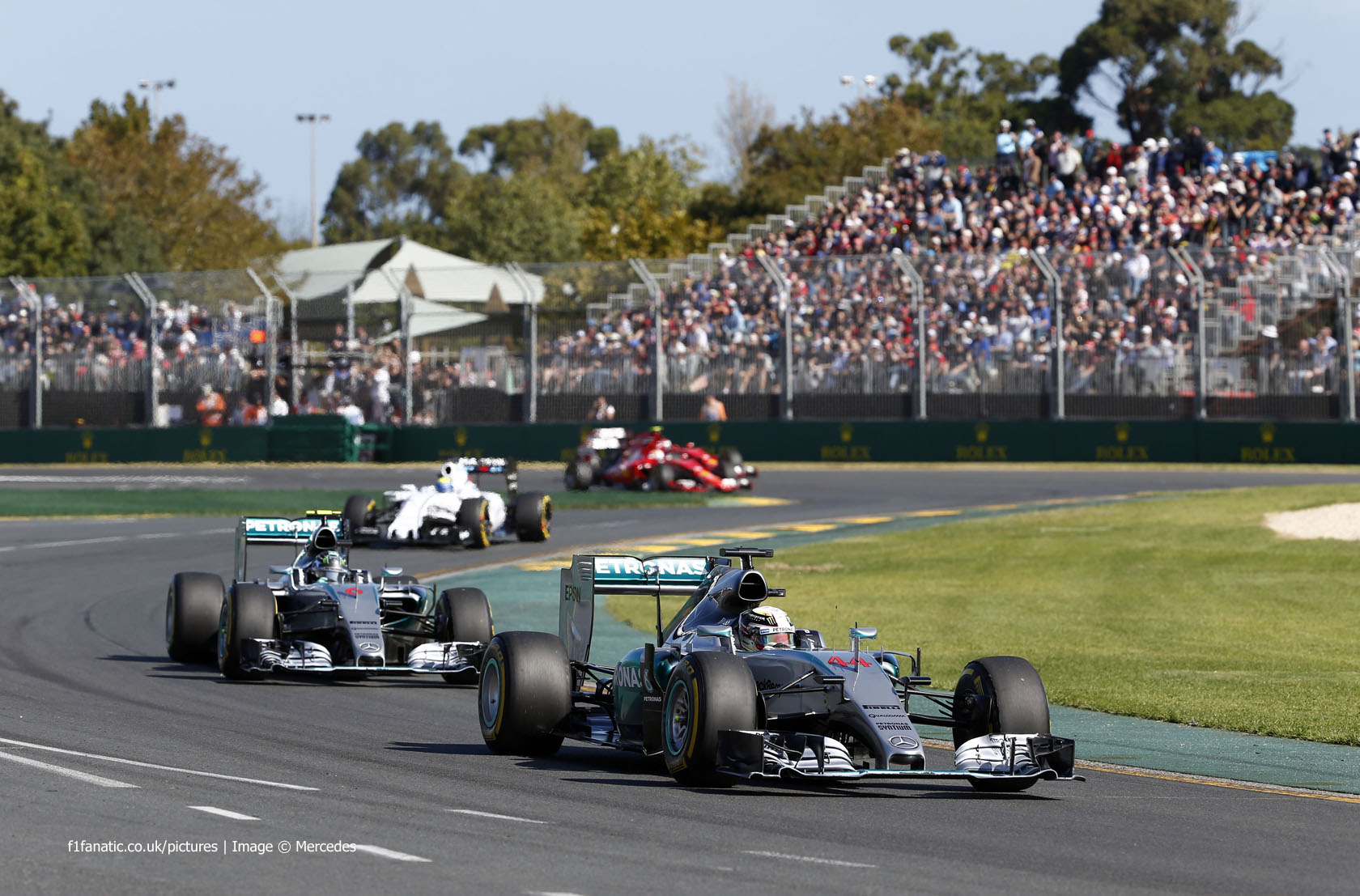 Mercedes’ emphatic success in the first race of the season has prompted calls for their performance to be reined in.

In Horner’s view, the FIA tried to constrain Red Bull’s supremacy between 2010 and 2013 via outlawing their innovations using a series of technical directives and rules changes. He now wishes to see the same happen to Mercedes.

Bernie Ecclestone made his sympathy towards Red Bull’s point of view clear and even gave an interview to Italian media in which he suggested Mercedes had gained an unfair advantage when the current regulations were devised.

However his insinuations about Mercedes ‘knowing a bit more about the power unit because they were in close contact with the FIA’ could be interpreted as Mercedes having done their homework better than their rivals. Mercedes described the implication they had accessed to privileged information as untrue and stated on Twitter “we all had same rules at same time”.

Ecclestone also claimed there is a dispensation in the regulations which allows the FIA to level the playing field between different power units. The rules require teams to homologate their current engines before the season begins, but there is a clause which allows for power unit changes after that deadline:

*A deadline of 28 February 2015 was permitted for this year’s championship.

However the next line of the rules will dampen the hopes of those who wish to see the FIA use it to cut Mercedes’ advantage:

Such changes will normally only be accepted if they are being proposed for reliability, safety or cost-saving reasons.
2015 FIA F1 Sporting Regulations, Appendix four

But whether or not the existing rules can be used to close up the field, the more pressing questions is whether they should.

Four consecutive years of Red Bull championship success from 2010 and 2013 will no doubt leave many with the view that it’s a bit rich for Red Bull to be complaining about how one-sided the competition is at the moment. But Horner is right when he points out that Mercedes are further ahead at present than Red Bull were at any point during their championship campaigns: it was true at the end of last year and they were even further ahead last Sunday.

Formula One can ill afford another one-sided championship at a time when its viewing figures are suffering.

Horner’s frustration is understandable as Australia was an embarrassingly poor start to the season for his team. However that does not mean Mercedes’ deserve to have their hard-won advantage taken away from them.

Contrary to the rhetoric from Red Bull and Ferrari last year, there is sufficient scope within the regulations for rival manufacturers to close the performance gap. It was clear from the first race Ferrari has made progress with its power unit over the winter, and it’s up to Renault to do the same.

If Horner was making the case that the current engine regulations are not right for F1 and should be replaced with something more suitable, I might appreciate his point of view. And even if he were to claim that the rules governing aerodynamics – always a Red Bull strength – are too tight and should be relaxed, that would also seem reasonable. Perhaps that is where he is going with this gambit – taking an unreasonable position in order to later retreat to a more sensible one.

But the notion that Mercedes deserve to be compromised merely because they are playing the game well is worse than just wrong, it’s injurious to Formula One’s reputation as a competition. Far from indulging Horner, the FIA should remind him of article 151 of the International Sporting Code, and what happened to the last team which was judged to have brought F1 into disrepute.

Red Bull’s threat to go home and take their ball with them because they aren’t winning any more is adolescent behaviour. But if Mercedes were reined in, and the millions they have spent on building a better engine erased in a single stroke, it would be hard not to agree with them if they decided to not waste any more money on a rigged competition.

Should power unit performance in F1 be equalised? Cast your vote below and have your say in the comments.

Should F1's governing body equalise power unit performance to help Renault and others catch up to Mercedes?

256 comments on “Should engine performance in F1 be equalised?”