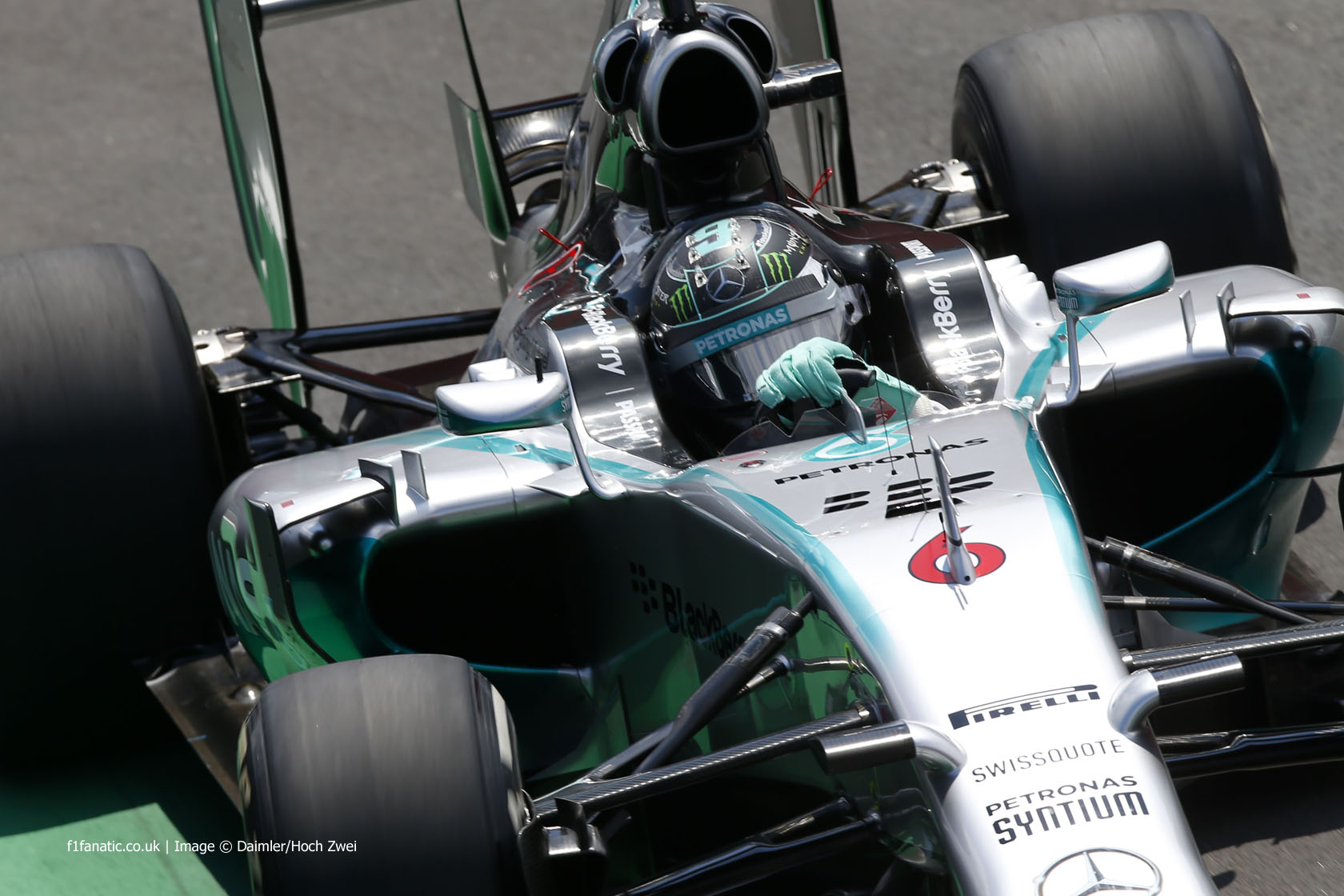 Mercedes were so crushingly dominant in 2014 – far more so than Red Bull were during the previous four seasons – that ranking their two drivers alongside the 22 others is tricky. The Mercedes duo rarely found themselves having to fight the other cars on-track, when they did the W05 was usually far quicker, and the other drivers were generally advised not to waste their time trying to hold them back.

That makes it hard to judge which drivers this year might have done better than Nico Rosberg had they been in his car. But his stand-out achievement unquestionably was out-qualifying Lewis Hamilton.

Hamilton deservedly has a reputation as one of F1’s best qualifiers, and none of his previous team mates had beat him in a season’s worth of Saturday’s since Fernando Alonso in Hamilton’s debut campaign. And that was when drivers carried their starting fuel loads in qualifying.

Rosberg’s eventual winning margin in qualifying of 11-7 is a reasonably accurate reflection of how their one-lap pace compared. Hamilton did not set a time in Hungary (which is not counted in the score), and in Germany the time he set was not representative as he crashed sooner afterwards due to brake failure. But even taking that into consideration, and assuming Rosberg’s controversial trip up the escape road at Mirabeau during qualifying for the Monaco Grand Prix meant he kept a pole position he would have otherwise lost, making these allowances wouldn’t be enough to put Hamilton ahead.

However for the majority of the season Rosberg was plainly the weaker driver in the races. To his credit, once it was all over he acknowledged Hamilton’s superiority.

Rosberg’s strongest phase in the season was bookended by two controversies, the first of which being that moment in Monaco. Rosberg’s pole position – ill-gotten in the eyes of some – virtually guaranteed him an easy drive to victory in the race. That halted Hamilton’s run of four consecutive wins and restored Rosberg to the lead of the championship.

Although Rosberg did not consistently look the quicker of the two Mercedes drivers in the races that followed, he accumulated points at such a rate that him winning the championship began to seem a distinct possibility. Even so, rare were the days when he turned up and simply out-gunned his team mate. He was struggling to keep Hamilton behind in Canada when both were struck with similar ERS failures. While Hamilton’s prompted a terminal brake problem Rosberg coped magnificently well with the problem, keeping Sergio Perez out of range in the DRS zones so effectively some assumed the Force India’s system was damaged.

In Austria Rosberg capitalised on Hamilton’s errors in qualifying to line up ahead of him, and breezed past the Williams pair on his way to win number three. Another would surely have followed at Silverstone, where the tenacious Rosberg pressed on in qualifying while Hamilton backed off in tricky weather conditions, and reaped the rewards by taking pole position. Rosberg was leading when his gearbox failed.

Hamilton’s qualifying problems meant Rosberg took an unopposed win in Germany and might have done the same in Hungary had the Safety Car not been deployed shortly after he passed the pits to start his eighth lap. However he still should have been able to finish ahead of Hamilton, who started last, irrespective of Hamilton ignoring Mercedes’ instruction for him to let Rosberg through at one stage.

Then came the second turning point of the year – the contact between the pair at Spa. Again Rosberg had taken pole position, but Hamilton had shot into the lead only to find his team mate bearing down on him as lap two began. Hamilton saw off his challenge at Kemmel but Rosberg clipped him as he tucked in behind the Mercedes – either not realising or not caring he was dangerously close to the other car.

There was nowhere to lay the blame for this one other than at Rosberg’s feet. Mercedes did so and it plainly left him rattled. From that point on he never looked like a match for Hamilton on Sundays. Even in Brazil, where Rosberg took his fifth and final win of the year after Hamilton spun off, the number six Mercedes was plainly the slower of the two.

The timing of Rosberg’s race-ruining ERS shutdown in Abu Dhabi was cruel, but unreliability cost his team mate slightly more over the course of the season. While Rosberg’s failure was unfortunate, had it happened to Hamilton and made Rosberg champion it would have been unjust. The reverse isn’t true.

Rosberg didn’t do enough to deserve the title, and had others been given his opportunity they surely would have made Hamilton work harder for it.

He delivered immense one-lap pace, but since Spa he was completely outclassed by Hamilton, although he handled the situation brilliantly in Abu Dhabi. Considering the fight was with the best driver in the grid, Rosberg did a great job.
McL88ASAP (@Deongunner)

All the data I refer to while producing the rankings can be found on the site. They include notes on each driver’s performance at each race weekend, compiled data on car performance, direct comparisons between team mates and each driver’s form guide.