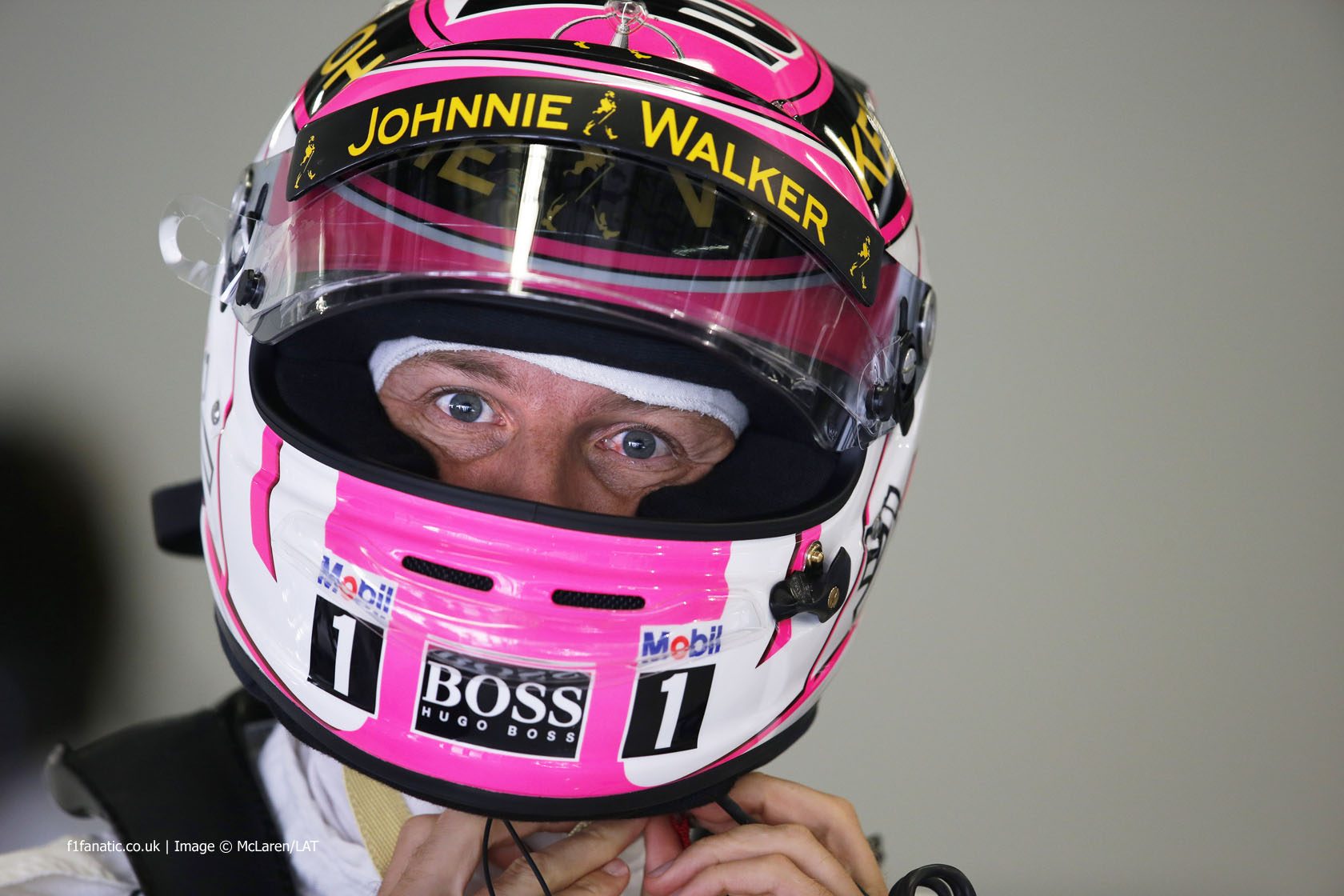 In the round-up: McLaren are tipped to use their announcement today to confirm Jenson Button will remain at the team and be joined by Fernando Alonso in 2015.

Last call for your Pass of the Year nominations

The Pass of the Year poll is coming soon. So far 61 different overtaking moves have been nominated and these will be whittled down to a top ten based on which got the most nominations. “The Briton’s management and Dennis did not speak for nearly two weeks after the final race of the season in Abu Dhabi, with many feeling the team have not shown Button the respect he deserves as a former world champion.”

“Caterham’s administrator says talks are ongoing with ‘three interested parties’ as they look to get the team on the Formula One grid next season.”

Claire Williams: “From where we were last season, it’s such an amazing achievement against the likes of Ferrari which is operating on a budget twice the size of ours.”

Hulkenberg sure chance will come (Autosport)

“We didn’t work good enough or efficient enough but I think if we can do that, if we can be better there and bring the updates as we wanted, then I can see us getting stronger again.”

How to drive a real F1 car (AutoWeek)

“There were three real F1 mechanics and a whole squadron of support personnel. Our 2005/2006 Renault had a Peugeot V10 it because Renault will not let GP Experience use its engines for this.”

F1 Teams To Be Consulted Over New Chairman (Forbes)

“The replacement for Mr Brabeck-Letmathe would take over these responsibilities so it seems unlikely that he would end up becoming Mr Ecclestone’s successor as one of his duties is to find a suitable candidate.”

Leading F1 into the future (Crash)

“A good manager and marketer, a canny financial officer, and a man who preaches social responsibility? If [Paul] Walsh can’t make F1 look attractive to potential investors, the sport may be a lost cause.”

Meanwhile, at a barber's in Woking… #F1 pic.twitter.com/0tUqWR2aRU

If Button is named as Alonso's team-mate on Thursday, there will be some very unhappy Danish journalists. Their media has been invited, too

So after months of being put through the mill, @JensonButton is to keep his drive. @McLarenF1 just saved themselves a lot of Twitter hate.

A shock to hear that one of those that departed in recent McLaren cull was Peter Hodgeman who goes back to Project 4 days. Ruthless Ron!

Interesting data from @pirellisport on how tyre use in #F1 changed this year. More here: http://t.co/7sUcnz5FpX pic.twitter.com/rL2ssuorGP

Back @McLarenF1 today for training and simulator tomorrow! #WinterBreak

.@danielricciardo has hidden tickets to the 2015 #AusGP all around @Melbourne Follow @redbullau if you want clues to find them! Good luck!

There’s been a lot of discussion over McLaren’s driver line-u0 – which may come to an end today – but don’t they have bigger problems to worry about?

In my opinion McLaren’s main problem is not their drivers, but it was their chassis. They had best engine this year plus reliability and they were still fighting in most races for low points-scoring positions.

Next year, even if Honda is the best engine I doubt they will have huge leap from this year. And then they treated badly both Button and Magnussen along with some blunders. I’m huge fan of McLaren, but my respect seemed lost time over time.
Mcl88asap (@Deongunner)

Happy birthday to Debaser91 and Ryan!

On this day last year the FIA declared it was inviting new entrants to F1 in 2015 and 2016. Haas F1 Team (originally Haas Formula) was granted an entry but is not due to arrive until the year after next.

74 comments on “McLaren tipped to announce Button will keep seat”