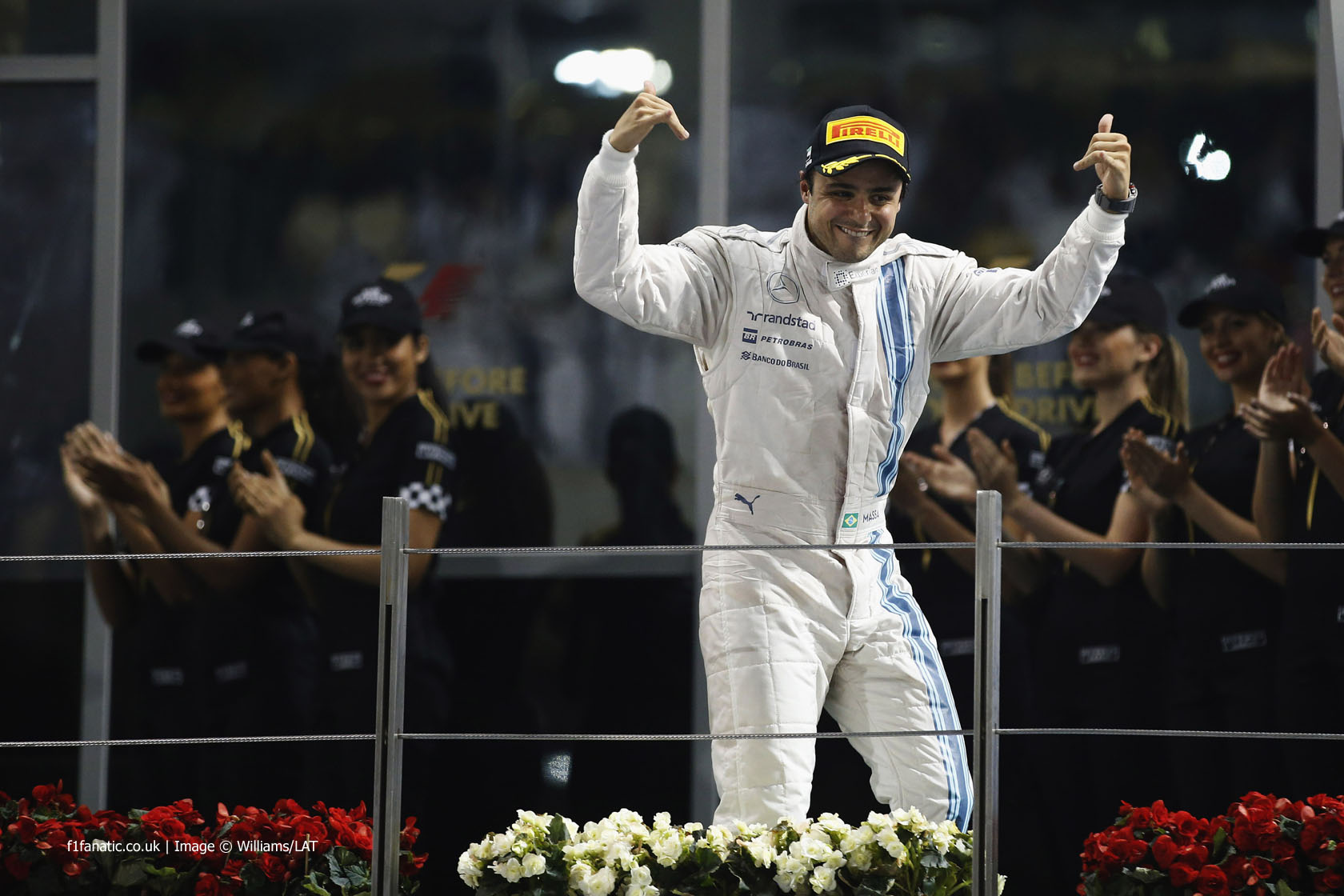 In the round-up: Felipe Massa is looking for Williams to take another major step forward in competitiveness in 2015.

“I hope this is the beginning of a 2015 full of wins and that we can get to Interlagos and Abu Dhabi with a chance of fighting for the championship.”

“One issue that has emerged in recent technical meetings with the FIA is that there is no date specified in the regulations for when 2015 engines must be homologated.”

“Donald Mackenzie, the co-chair and co-founder of F1’s 35% private equity owners CVC, hadn’t wanted to interrupt the racing season, but that Walsh would ‘lose patience’ if he wasn’t appointed before the next season starts in March.”

Let me be clear about F1…. Working in F1 is not easier… But with many more people working on a car it's better organised

than when you have 3 guys in F3 working on your car. It has nothing to do with the racing on track aspect.

and everybody knows what they have to do specifically. And when you ask me…. Yes it's not hard to adapt to that because it's 'easier'

.@RGrosjean you could always give up your seat mate for the youngsters!! 😉 #banter

It was a tough year for Kimi Raikkonen (more on that later today) but @Bullmello is keeping the faith:

Certainly the car was more aligned with Alonso in mind than Raikkonen all season long, whatever form that took.

I don’t believe that Raikkonen forgot how to drive or lost his form either. A driver of his talent doesn’t go from eight podiums including a win and six second-place finishes in 2013 (without even completing the last two races and against the dominant Red Bull car) to what happened in 2014 without some good reasons.

The car was never really set up well for his driving style. With Alonso gone, Allison having more design input with the 2015 car and hopefully some catch up with Mercedes, 2015 could be much better for Ferrari and Raikkonen.

I don’t give up on good drivers easily unless they give reason to be given up on. Raikkonen tried his best all season long, he never gave up even though things were not going well.

He didn’t complain or pout. He did say the car was not the way he or Ferrari wanted it to be and that they were trying to do better. He was professional even though there were some who were criticising his abilities. I hope he is redeemed in 2015. I know he can still drive at a top level.
@Bullmello Whether a new Intercontinental Cup for Le Mans cars could be a future rival to F1 was the subject of discussion on F1 Fanatic on this day in 2009.

Five years on, the World Endurance Championship has grown from it and the series looks to be in excellent shape. Nissan is set to join fellow manufacturers Audi, Porsche and Toyota in the LMP1 class next year. Following Mark Webber’s move to the category this year has come the news Nico Hulkenberg will start two races in addition to driving a full F1 season in 2015, and Fernando Alonso has also revealed his interest in racing at Le Mans.

64 comments on “Massa hoping for Williams breakthrough in 2015”