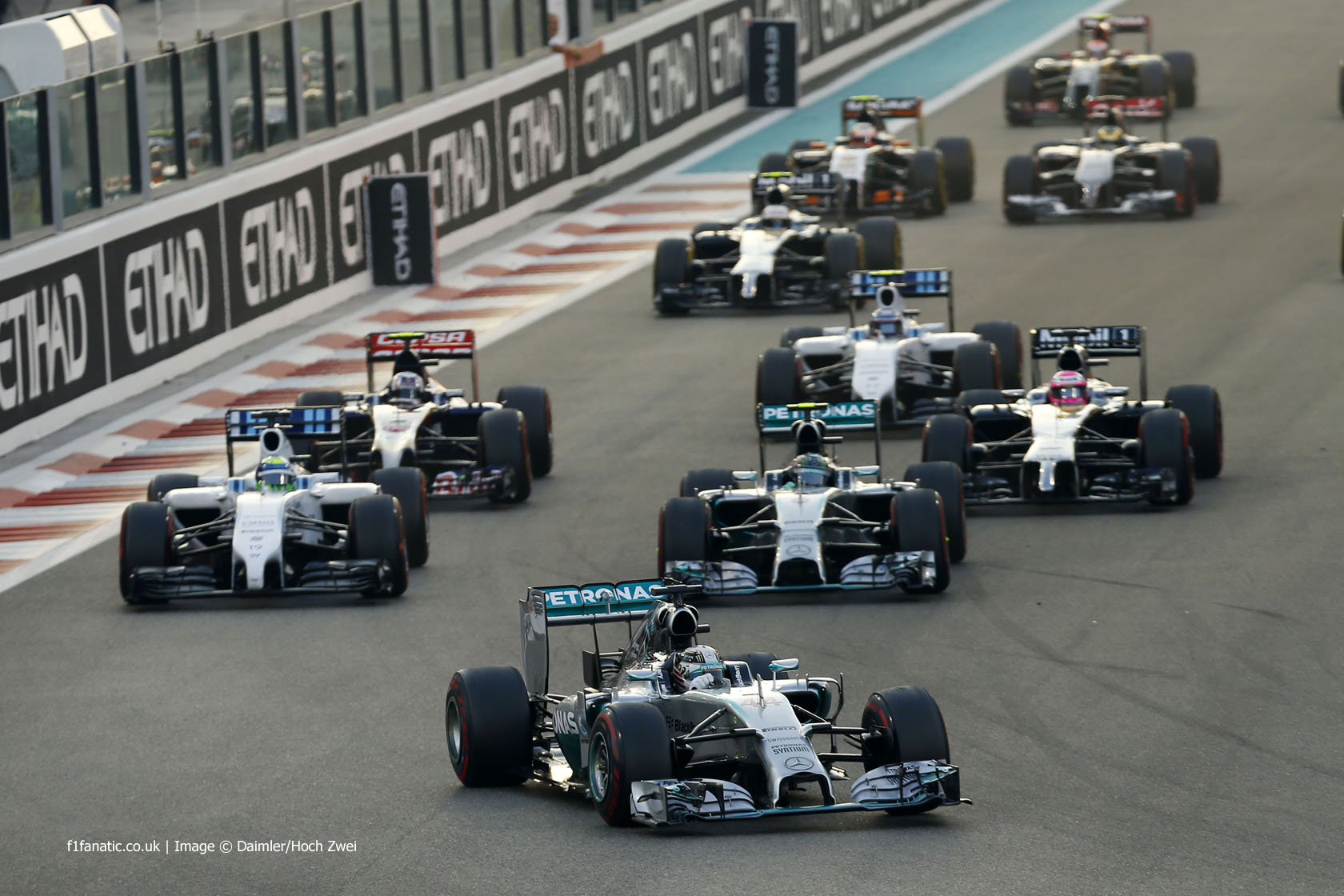 Which F1 driver was the best performer during the Abu Dhabi Grand Prix weekend? Sebastian Vettel – Both Red Bull had to start from the pits following their exclusion from qualifying. Vettel started behind his team mate in the pits and followed him through the field until they reached Magnussen. Ricciardo passed but Vettel got stuck behind him, which ultimately determined how their races panned out – Vettel ending up stuck behind the Force Indias.

Daniel Ricciardo – Exactly how Ricciardo got past Magnussen appears to have been missed by the television director which is a pity, because it was a pivotal moment in his race. It was one of several passes he made on his was to fourth having start in the pits, and certainly the most significant.

Nico Rosberg – Despite the pressures of the championship showdown Rosberg delivered a weekend which was fairly typical of his 2014 performance. Error-free when it mattered in qualifying, he comfortably beat his team mate at another track previously thought of as a Hamilton stronghold. But he fluffed his start and never seemed to have the pace to challenge Hamilton for victory. The manner in which his malfunctioning car progressively deteriorated was a cruel way to end his title bid. Lewis Hamilton – Qualifying slip-ups have been a feature of Hamilton’s 2014 campaign, and having led the way in Q1 and Q2 he missed out on pole position again. But his start was so good he might have taken the lead from the third row with it. He kept Rosberg out of range and was eager to reduce his own pace when the other car hit trouble, but nonetheless brought the car home for his eleventh win of the year – and with it his second world championship.

Fernando Alonso – Following Alonso’s second technical fault in as many Saturdays the team were sufficiently concerned about his limited engine life to re-use an old unit for quick run in final practice, then change the unit before qualifying. That done, he made it into Q3 but only could only take tenth place. An early pass on Raikkonen gave him the advantage when it came to strategy, but with both Ferrari hampered by technical niggles there was little he could do to prevent his slide back to ninth.

Kimi Raikkonen – Had few complaints about his car’s balance after the race, putting Ferrari’s lack of competitiveness down to a simple lack of performance – which was highlighted by his inability to lap quicker than Kamui Kobayashi’s Caterham.

Romain Grosjean – Demoted to last on the grid and given a drive-through penalty before the race even started which he described as a “cruel symmetry” to “what we started with at the beginning of the year in Melbourne”. Ditched a planned three-stop strategy in the race and, with better pace than his team mate, got ahead of the Caterhams and Saubers, and demoted Rosberg on his final lap.

Pastor Maldonado – As they expected before the race, Lotus were not competitive at Yas Marina and Maldonado struggled with front brake locking during qualifying. Had it not been for his fiery end to the race he could have been caught by Grosjean – despite his team mate’s penalty – before the end of the race. Jenson Button – Promoted to sixth on the grid by Red Bull’s exclusion, a rapid start got him up to fourth. His early first pit stop cost him a place to Bottas, though he would have struggled to keep the Williams behind anyway, and the same goes for Ricciardo’s Red Bull. It’s hard to see what more he might have done.

Kevin Magnussen – Narrowly failed to gain a place in Q3 after struggling for rear grip and losing time behind Perez. He thought his car was damaged after tangling with Sutil on the first lap, but his team told him to carry on. After switching to super-softs for the middle stint he was passed by Vettel – McLaren admitted they may have told him to manage his pace too much. He finished out of the points behind the two Ferraris.

Nico Hulkenberg – Force India suspected they solved an aerodynamic problem prior to the race, a diagnosis which seemed to be borne out by them taking their best result since round three, with both cars in front of both Ferraris. Hulkenberg led them, despite fuming at a five-second penalty for pushing Magnussen off on the first lap.

Sergio Perez – Edged Hulkenberg in qualifying but was passed by him at the start and never got back ahead again. Finished the race under attack from Vettel. Adrian Sutil – Despite missing Q1 (Adderly Fong drove his car) Sutil was happy with the balance of his car in Q1, but less so in Q2 when the track temperature began to fall. He accused Magnussen of hitting him at the start of the race, and like his team mate fell behind the Lotuses early on. He persevered to the end – of the race, and the season.

Esteban Gutierrez – Narrowly fell short of passing the wounded Rosberg at the end of a long final stint. He ended his last race for Sauber a disappointing 15th ahead of Sutil, who is also on his way out.

Jean-Eric Vergne – Started tenth with his eye on a points finish in what may have been his last race. He was passed by the Force Indias ad Gutierrez at the start, but he got back ahead of the Sauber within a few laps. The Force Indias left him further behind as the race went on and he finish out of the points. “The pace was just not good enough,” he said.

Daniil Kvyat – Took a strong seventh on the grid and believed he could have done better – which would have meant beating one of the Red Bulls. It got better after qualifying, when Red Bull’s exclusion promoted him to fifth. Like his team mate he lost ground initially at the start then fought back, passing Raikkonen. But shortly after his first pit stop a transmission problem put him out. Felipe Massa – From fourth on the grid, directly behind Hamilton, he made a similarly good start and took third from Bottas. he lurked not far behind the Mercedes pair and was perfectly placed to collect second when Rosberg hit trough. A late switch to super-softs was a valiant attempt to put Hamilton under pressure, but it didn’t quite pay off.

Valtteri Bottas – A bad start ensured he would end the race behind his team mate, but by making his first pit stop late he was able to regain a lot of lost ground. That allowed him to claim fourth at the end ahead of the closing Ricciardo.

Kamui Kobayashi – Picked up where he left off after two races away. His race pace was surprisingly strong, but four laps after setting his fastest tour he reported a vibration had made the car “undriveable” and he parked up in the garage, as he had done last time out in Russia.

Will Stevens – The newcomer was on course to improve by a second on his last qualifying run when he slipped up at turn 17, but nonetheless ended up a respectable 0.5s off Kobayashi in his first race weekend. He was a similar margin behind in the race, though he tended to lose more time while being lapped. He got the car to the flag, however.

Who was the best driver of the 2014 Abu Dhabi Grand Prix?