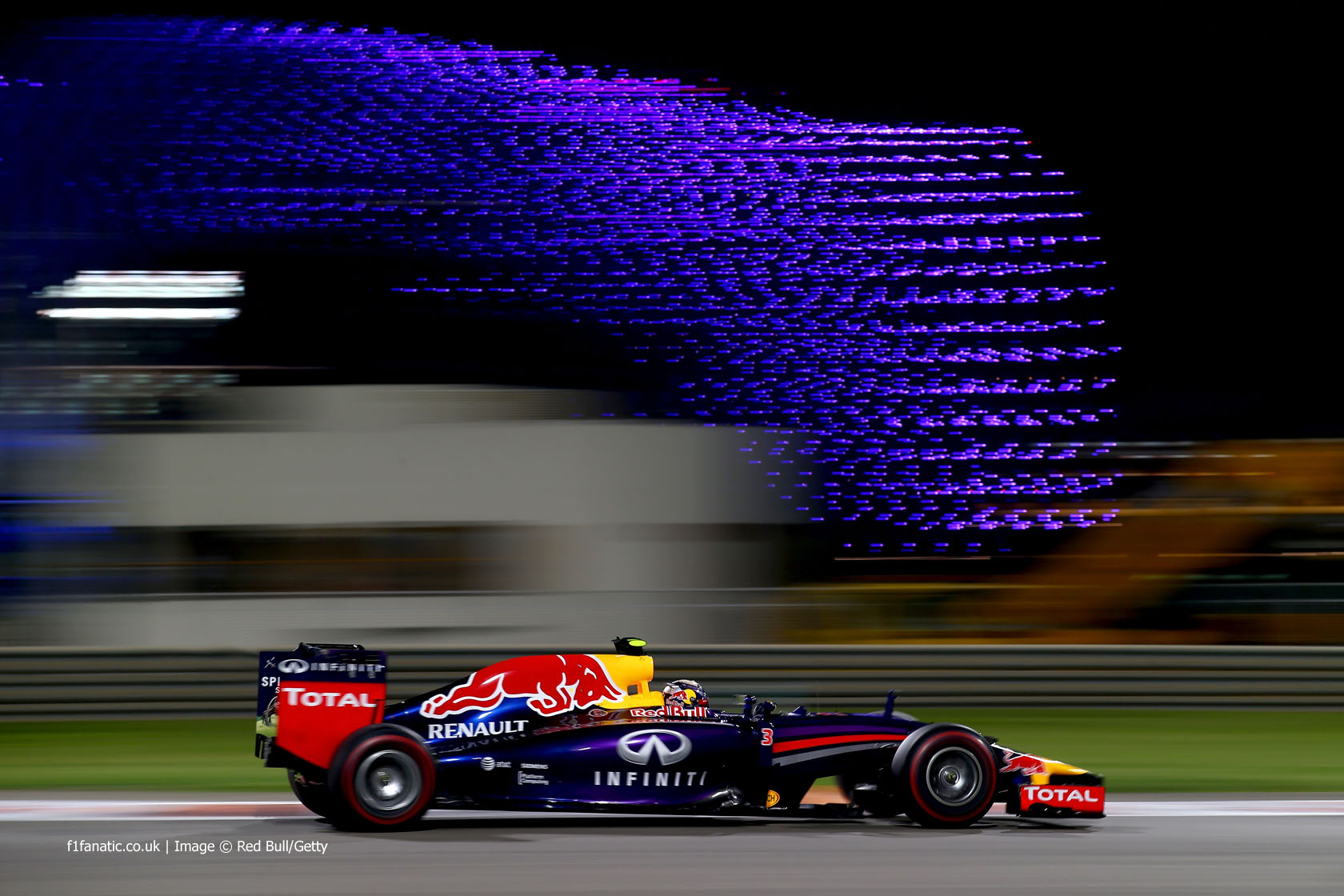 Qualifying was a fairly straightforward affair – until the bombshell news of Red Bull’s exclusion.

Here’s how Saturday at the Abu Dhabi Grand Prix happened on Twitter.

After cutting his ties with Caterham, Marcus Ericsson spent qualifying in the commentary booth rather than on-track.

In Abu Dhabi. Commentating for Swedish TV #viasatF1 again this weekend. If you're in Sweden you better… http://t.co/NGOiWaRw6d

Bottas told: "Not sure what Alonso's doing in front. He seems to be laying rubber around the track. Let's have a good gap to him." #F1

A nice touch from the boys in the garage, floor graphic updated ahead of today's FP3 and quali sessions. #DankeSeb pic.twitter.com/JgOGBZ6AR4

Eddolls told Bottas "And we'll box now" as he was in turn 20, Williams testing how late they can make their pit entry call. #F1 #AbuDhabiGP

After a very early start to line up to see JB and KM we got there! #excited @TeamMcLaren pic.twitter.com/cQV1qeoWEp

Ron Dennis on 2015 line-up: "You presume that there are three people involved. You should stretch your imagination and maybe think of four."

Alonso: "A Toro Rosso disturbed me at the pit lane exit." Kvyat: "I was pushing, I didn't see him at all." #F1 #AbuDhabiGP

Stella: "Tell me how the lap was." Alonso: "The lap is good. With a difficult engine, it's good enough." #F1 #AbuDhabiGP

Good effort by @WillStevens_ to be half a second off @kamui_kobayashi. He hasn't put a foot wrong so far #F1

"Are you serious?" Button asks when told to abort his first run because he doesn't have enough fuel. #F1 #AbuDhabiGP

Keep it cool, Lewis. The Mercedes man locks up under braking in first dash for provisional pole. Nico quickest by 0.324 …. Tense times.

Ross: "OK Nico so you're P1." Rosberg: "You've got to stop with that Tony, serious! Be more enthusiastic, please! #F1 #AbuDhabiGP

@f1fanaticlive seems to be the live feed of choice in the media centre @f1fanatic_co_uk pic.twitter.com/PHoVDGxdnj

Tip of the cap to Kyvat. Great qualifying to finish the year.

Lewis is just too scrappy on these one lappers this season. The onboard from Nico almost looks slow he's so neat and tidy.

At least this year there was two quick drivers in the best car, makes it thrilling until the end. #F1

Slightly confusing joke from Rosberg there, offering Bottas a spa session I think? So he is on form tomorrow? Not his finest.

ROS very chatty in press conference, HAM the opposite. You don't need to be a sports psychologist to judge what's going on in their minds

Great to see some friends of Red Bull in our garage earlier during quali. #AbuDhabiGP #F1 pic.twitter.com/UjEMPktzsh

McLaren’s Stoffel Vandoorne won the penultimate GP2 race of the season, ahead of champion Jolyon Palmer and Mitch Evans. The latter was cheered on by his supporter Mark Webber.

Another cracking @GP2_Official race. Savour this last weekend without DRS…

We can confirm that @svandoorne will also drive both days in next week's Abu Dhabi test. #GoStoff #F1

1st step is done. hope the next will follow. What a car! Thanks for your support out there. Amazing. #AbuDhabiGP pic.twitter.com/j7Cx7066xj

.@ValtteriBottas : It is important for the team to get 3rd in the constructors and that was one of the best quali laps I've done all season

@craigdear86: Good luck @nico_rosberg and @LewisHamilton – you both deserve it and have the support of everyone back in Brackley!

Red Bull crisis?! Newey&Co came back from stewards with very serious faces. Big discussion going on in that room.. pic.twitter.com/FJCfH7bZnS

Last qualifying of the season and my last with Sauber… Now.. What comes next??? 🙈 http://t.co/ArZkXOf6Po

Felt good in the car today & pretty happy with how quali went. Lost quite a bit of time in the last sector because of a small mistake (1/2)

….but overall a good day. Looking forward to the race tomorrow and can't wait to get going! (2/2)

You can't keep a good team down! #TeamSpirit #Marussia 👊 pic.twitter.com/0vr4wVWcBP

Re the RBR wing flaps, I'm told the FIA discovered a leaf spring arrangement encased in a rubber shroud

Happy with qualy today. Strung together some good laps. Although both Seb & I need to start from the back now.. Aint gonna be a boring one!

A big F1 team that says we small outfits should not come with bananas to a gun fight, grabs maximum money and cheats on the regulations

Have holders of purse strings and decision makers in F1 become slaves to the whims of the big boys and the contracts ? What about F1 sport ?

Wonder if Christian Halliwell will visit the back of the grid,Will remind him of his first few years in red bull #whotgoearoundcomearound

A big F1 team that says we small outfits should not come with bananas to a gun fight, grabs maximum money and cheats on the regulations

…and this is the view from P2 for @LewisHamilton! Full focus on those 5 lights… #DesertDuel #AbuDhabiGP #F1 pic.twitter.com/djNDqZW7TA

Everyone asks about the first corner ,Well Nico and Lewis for me are clean great drivers I will be very surprised if anything happens.