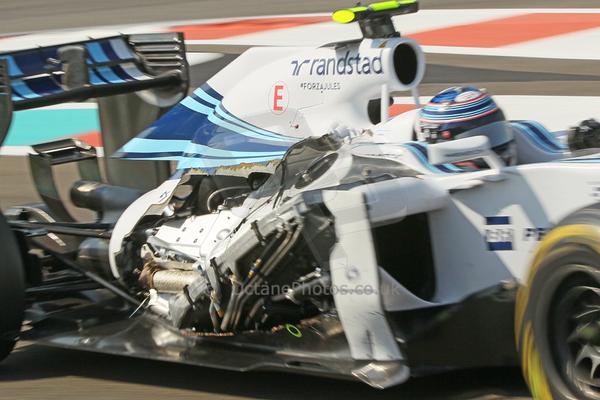 A busy first day of action at Yas Marina saw Williams shedding their skin, Fernando Alonso coming to a stop – and a new GP3 champion crowned during a qualifying session.

Here’s how the final Friday of the season unfolded on Twitter.

After two races of absence, Kamui Kobayashi and Caterham made a return to the grid, helped by crowdfunding donations.

And we're out on track thanks to you! #RefuelCaterhamF1 #THANKYOU pic.twitter.com/MI3SooEOBL

Good to see Caterham was second car out in FP1 at Abu Dhabi. Good effort but when I was there we were always first out #beready

The winner of last week’s Formula Three Macau Grand Prix is not impressed by the Yas Marina circuit.

With Macau still fresh in memory, I can't believe how boring the Abu Dhabi track looks… I really do believe my mother could be quick there

There's something in the air about this wknds GP! Can't wait #AbuDhabiGP #F1 🏁

Williams had to remove Martini branding and the red stripes from their cars due to alcohol laws. They had problems with that part of the car in the morning session as Valtteri Bottas’ engine cover fell off and Felipe Massa’s came loose.

A piece of the damaged Williams is returned to the Paddock. #F1 #AbuDhabiGP pic.twitter.com/JRb7jluQhH

Adderly Fong made his practice debut for Sauber.

Fong will be the first ever Hong Kong national to participate in an #F1 race weekend (though he was born in Vancouver, Canada). #AbuDhabiGP

Adderly jumped out of the car for some set-up adjustments at the C33 #AF37 #F1 #FP1 #AbuDhabiGP pic.twitter.com/eQNMXCgRYC

With technical problems, Jenson Button was on Twitter before the morning session ended.

Tough start to the weekend for me with no proper running in FP1, but we'll find our feet pretty quickly in FP2 don't you worry!! #JB22

Vettel: "Downshifts are horrible into second and first. Look at this lap." Rocquelin: "Understood." #F1 #AbuDhabiGP

Great to see @MercedesAMGF1 have got a lot of competition here in Abu Dhabi!! 1.7second gap! 😶

A deserved #GP3 title win for Alex Lynn, but seeing it decided because Dean Stoneman didn't take pole position is a bit of an anticlimax.

Those who call for #F1 to give points for pole position fail to account for this, which shows why it's a bad idea: http://t.co/lCQB57e3uP

What an amazing feeling! It's been so hard but I'm so proud to be the @GP3_Official CHAMPION!!!! A massive thanks to @CarlinRacing

Seb’s lid says ‘Danke’. If he thinks that’ll stop us gluing him to the floor and shaving his eyebrows Sunday night he’s sorely mistaken.

McLaren tested a new front wing, which has been built under direction of former Red Bull engineer Peter Prodromou.

Hamilton: "Are others having rear deg?" Bonnington: "We think so, so we believe we're in a unique position." #F1 #AbuDhabiGP

Tomorrow will be the hardest qualy of the year, not laps today and tomorrow minimum to save the engine. #Challenging ;)))

Tight at the top of FP2 #AbuDhabiGP. Looking comfortable for @MercedesAMGF1 on the outside, but surely a tense weekend inside the garage.

Didnt know I was in Abu Dhabi at the moment! 😅#F1 pic.twitter.com/Fk4nNIpUfH

Change to the FIA press conf line-up as Finbarr O'Connell, on his first ever visit to a motor race, makes an appearance!

Also F Gastaladi replaces G Lopez for Lotus, and O Szafnauer stands in for B Fernley at Force India

Is it me or are Horner's ideas of changing F1 power units again for cost cutting shear madness?

#Finbarr quizzed about the crowdfunding – money has been spent on getting team here.

Rival team bosses say they have no objection if Caterham wants to use the 2014 Renault power unit next year. Currently rules won't allow it

Toto "We always try and be neutral. We need to maintain our role and respect the fact that Sunday won't be a good day for one of them" #F1

4th pole in a row for @svandoorne. Clearly the most impressive #GP2 driver of 2014. As if @McLarenF1 didn't have enough talent to pick from.

Had a great time in FP1 with @Lotus_F1Team , next time in the car on tuesday for a full day of test;)! #F1 #AbuDhabi pic.twitter.com/3TM9RlDEk5

Practice looking pretty promishing today but I do not know if it shows the real picture. Let us see tomorrow!