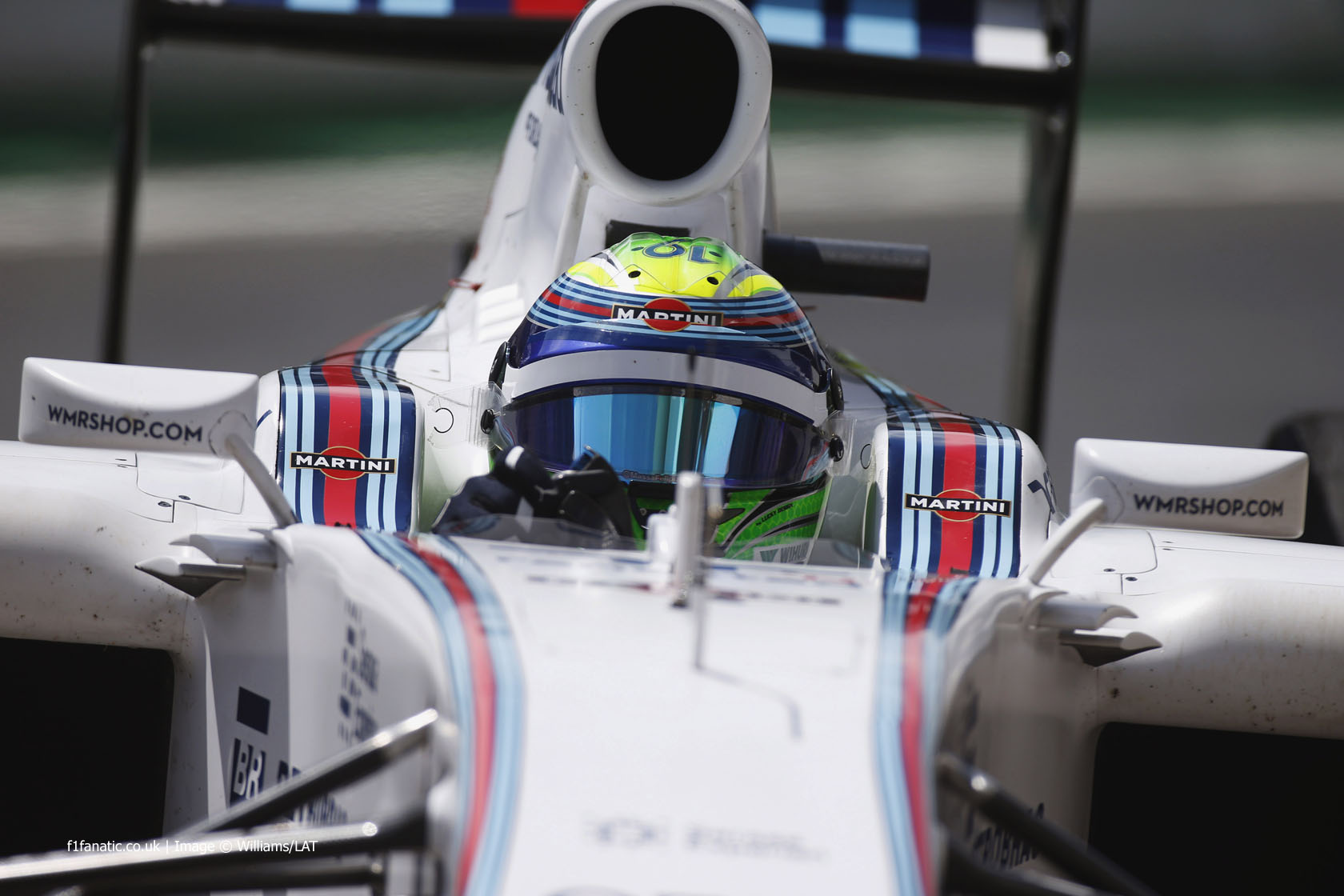 The Brazilian fans were out in force for Felipe Massa as the local hero made a bid for pole position at Interlagos.

Here’s the story of Saturday at the Brazilian Grand Prix on Twitter.

Hulkenberg: "Still judder and vibration under braking." Joyce: "If we think we need to change brakes we can do it & get out for 1 more run."

Joyce adds to Hulkenberg: "It's half an hour for a brake change." #F1 #BrazilGP

Come on @JensonButton let's have a good session to make up lost ground of yesterday pic.twitter.com/qbs0ir8kvz

On a day of uncertain weather like today, every kind of tyre is on the ready in the garage… #BrazilGP pic.twitter.com/F0Ltxhvp8l

Really, we do have the best fans in #F1. #BrazilGP pic.twitter.com/A7zjY7XNck

With the absence of Marussia and Caterham, some teams now find themselves at the back of the grid.

Must be really hitting home to what we used to call the 'midfield' teams that they are now battling not to be last. Not great PR…

Sergio Perez had gone 50 races since his last Q1 elimination, which was the best run in the field, believe it or not

Force India’s Mechanical designer hoped for rain, but there was to be no part three of Nico Hulkenberg’s Interlagos heroics as the circuit remained dry.

Sutil goes off at Juncao. Hulkenberg reports he's "losing quite a bit on the straights". #F1 #BrazilGP

Adrian could not make his way back to the garage, the team pushed the C33 back #Qualifying #BrazilGP

Vettel: "OK I could do with a little more front wing still." Rocquelin: "You OK with four clicks?" Vettel: "Yeah. Go ahead." #F1 #BrazilGP

Have to say, I won't be sad to see the back of the pit/paddock complex in Brazil. Cluttered, cramped and out of touch for modern m'sport.

There're certain tracks where the crowd can make a big difference to home drivers, Interlagos is one. @MassaFelipe19 #F1

Hamilton: "It says my right-rear brake is zero." Bonnington: "Not from where we're seeing it, they both look good." #F1 #BrazilGP

The Brazilian fans are immense, can hear them cheering over the cars! Season finales belong HERE not in a carpark in the dessert 👎🏁

So that's the fastest ever pole position time at @InterlagosTrack for @nico_rosberg, but 0.201s off the track record: http://t.co/XmVQZDBnsa

It's at races like Brazil (with a passionate crowd) where these quieter 2014 #F1 engines have an added bonus. Nice to hear crowds cheering

Another good effort from Williams. Let's hope they can take Mercedes out of their comfort zone in the race and spice things up #F1

Good result as a team for us in qualifying today, starting 4th for the race tomorrow. Tomorrow is what matters – it'll be fun! 👊 #BrasilGP

Massa: It was a great qualifying & the reaction and energy from the fans was very special and emotional for me #BrazilGP

All teams principals in Bernie's shed. Wonder what they're talking about…

Leaving the paddock at the #BrazilGP. Small mistake cost me Q2 but tomorrow we will do our best to get in top 10! pic.twitter.com/fB1jo1x9aL

Some, not all – but some journalists really ask daft questions in the Bull Ring. Why ask what a win will mean to a driver? Really?! Ugh…

Not too bad today – not too great either. Hoping for some awesome racing tomorrow. Good chance for some decent points. #BelieveInMcLaren

So good to be back at Interlagos. A short, natural, flowing track which keeps the pack tight and overtaking always a possibility …

And the #BO77AS crew get their season snap completed just before the rain falls #2014 #F1 pic.twitter.com/2krshab17l

Minor – and pleasant – bombshell from @LewisHamilton "I heard Manor, not Marussia, are coming back next year. " #f1

(cont) … and when he was greeted with puzzled looks and a few shaking heads, added: "I want to put that positive energy out there." #f1

Lot of talk about @WilliamsRacing lacking the killer instinct you need to win. If the team gets everything right tomorrow it could happen

Team principals come out of meeting with Bernie. Conclusion? No great progress been made. No deal imminent.