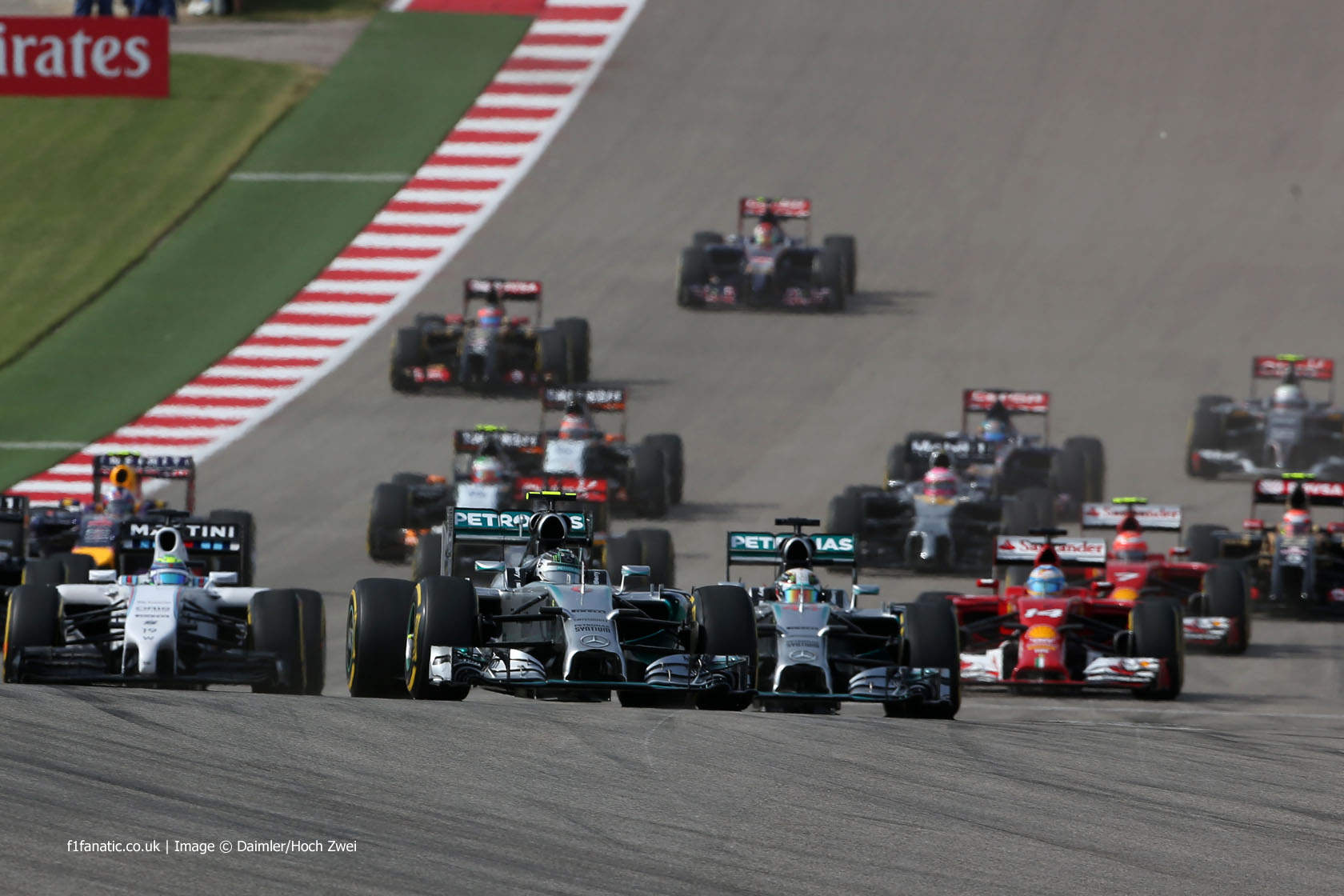 While the previous round in Russia was seen to have fallen short of the high standard set by many races in 2014, F1 was back on form at the Circuit of the Americas.

The race which saw Lewis Hamilton passing Nico Rosberg to win, Daniel Ricciardo making his way up to third and several scraps for the lower points places at the end, received an average score of 7.3 out of ten from F1 Fanatic readers.

That puts it close to the average for the season so far, and many of the comments from readers reflected that view. Here’s what you had to say:

Really good fighting up and down the field throughout the race and we had a battle for the lead as well.

This track – and the softer tyres – is very good for encouraging overtaking. COTA is the best addition to the calendar in recent years.
@WillWood

Not the best race of the season, but a very nice race nonetheless. There was battle for the lead (even if it wasn’t very exciting), the battle for the podium was decided in the pits, so a bit disappointing. But the last few laps were quite fun, people were all over the place, the Lotuses ran wide basically in every single corner, Vergne overtaking Gran Turismo style (which is using your opponent to make the corner) and Vettel pitting even if there was no need to, probably.
Yoshitsune (@Yobo01)

Several F1 Fanatics commented that the absence of four cars, leaving a depleted field of 18, affected their enjoyment of the race.

Very, very relieved that this was a good race. With two teams missing and the world champion starting from the pit lane, this could have been awful and killed F1 in the US for another ten years. But it was great with loads of overtaking through the field.
@TimothyKatz

Annoyingly more evidence for Ecclestone to say that backmarkers are pointless.
@Strontium

I didn’t enjoy it so much. F1’s current situation may have dimmed my view on the race.
@Rigi

I can’t describe it but it felt rather strange to see only 17 cars on the grid and already down to 16 by lap two.
PorscheF1 (@Xtwl)

I can’t say I was excited before this race as the background situation of the missing teams rather took the attention away from the job at hand. I wasn’t any more excited after qualifying, as the cars at the front looked like they could easily process to the finish with no order change.

However, that was an entertaining race with plenty of overtakes, different strategies and good, simple wheel-to-wheel racing. It reminded me why I like F1 in the first place!
James (@Spirals)

The start was a little slow (with the safety car and all) but it picked itself up rather neatly and kept me entertained, with plenty of drivers going all out and having the tyres and track to battle on. Perhaps it’s because Vergne has to prove himself, but him, Maldonado, Ricciardo, Vettel and Grosjean were really giving it their all during battles. That’s really what I want to see; drivers fully directing their attention to a battle as it happens, I can live with the calls for tyre preservation once they’re past.

That being said, it definitely felt like there was less at stake without Marussia and Caterham.
Nick (@Npf1)

An improvement on the last round?

The previous grand prix in Russia received one of the lowest scores ever seen on Rate the Race. And there were some who felt last weekend’s race was no better:

I don’t see how this race was any better than Sochi.
PorscheF1 (@Xtwl)

I’d have to say the first six laps of Russia were okay, but today at COTA there was always a battle going on, positions were being traded throughout the field much more entertaining than Russia. Yes Mercedes were out in front again but the rest of the field remained quite entertaining. Also there is no comparison between Sochi and Austin as far as the circuit is concerned.
RB (@Frogmankouki)

There was far more action and the race was won in a tight battle, with a nicely done pass for the lead, while the midfield had a great tussle for most of the race.
@BasCB

I hate having one dominant car. Lost interest by the end. Just can’t get into this season, if it’s anything like this next season I can see myself giving up on F1.
Yes (@Come-on-kubica)

View from the stands

@DaveD offered a verdict from the enviable vantage point of turn one:

I was sitting at turn one so that made it great for me!

But it was a great race for those of us in the crowd. Everyone around me loved the race and had a blast which is the important thing. And there were so many passes and then over-under moves between turn one and turn two that it was great for those of us at the race. And lots of fights throughout the field that we got to see that weren’t always obvious if you watch the TV feeds.

Alonso and Vettel were both driving like wild men and the fight between Button and Alonso for about three laps was awesome.

Well worth the trip.
@DaveD

Bernie Ecclestone raised his complaints about F1’s engine noise again but this fan was happy with what he head:

I really liked the sound. It was loud enough that you could still feel the power of the cars, but it wasn’t silly loud so that it hurts your ears. As others have noted, you really, really can hear all kinds of cool sounds: the whir of the of the ERS kicking in while it was under hard braking and then the acceleration of each engine as it took off towards turn two.

And I was right at the fence and could enjoy the race with no ear plugs and no headache! It was awesome to me and it certainly didn’t rate a comment from anyone around us and we made lots of friends during the couple hours before the race, and I did ask. A few people said they missed the engines you could hear all around the track, but admitted they preferred to be able to talk and cheer and hear the announcers so they knew what was going on.
@DaveD

F1 back as it should be

However the general reception to the race was that the 2014 season is back up to the high standard established earlier in the year.

After a reasonably cool race in Japan which ended in horrible circumstances we were then subjected to total bore of a race in a country where the president is a nut-case.

Finally we were given an opportunity to see Mercedes versus Mercedes, Williams stay close for a while, Ricciardo drive brilliantly again with him, Alonso and Button fighting with everyone before Button lost the balance with the rear. People always imagine a golden age, forgetting that Ferrari dominated for five years, that Red Bull dominance made 2011 and 2013 dull, and cars in the ’70s and before could be separated by minutes.

Apart from Bianchi’s accident and the politics this year has been a cracker, better than it being Vettel versus Vettel.
@Broke84

22 comments on “F1 back on form with popular COTA race”