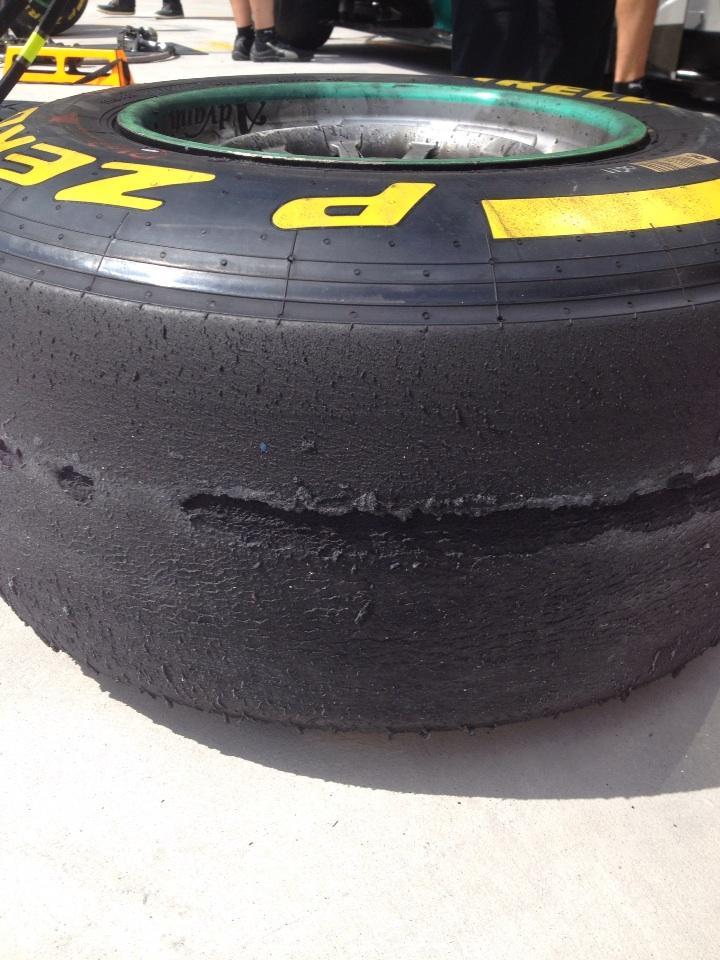 It was an eventful day on and off the track as the Brazilian Grand Prix weekend began at Interlagos.

The day’s activities played out as depressing news broke about the closing of Marussia, and the more surprising development of Caterham trying to crowdfund their way to the final race of the season.

During the practice session cars crashed, spun and caught fire. Those that managed to string a sequence of laps together between the interruptions tended to chew their tyres to pieces.

Here’s how Friday at the Brazilian Grand Prix happened on Twitter.

Felipe Nasr, who was announced as Sauber driver for 2015 yesterday, drove for Williams in a practice session for the final time.

Friday morning in São Paulo& @FelipeNasr is in the garage to drive his final #FP1 for us #BrazilGP #bancodobrasil pic.twitter.com/oPgCLnTkGj

Verstappen also gets sideways: “I almost spun in the fast corner. Can you look if there’s any damage to the front wing?” #F1 #BrazilGP — F1 Fanatic Live (@f1fanaticlive) November 7, 2014

.@Marussia_F1Team have ceased trading. Will not be in Abu Dhabi. Full confirmation imminent. Staff made redundant. Sad day for the team.

Gutted for all those staff at @Marussia_F1Team – lovely talented people who I hope will be snapped up by someone else very soon. — Rachel Brookes (@RachelBrookesTV) November 7, 2014

Rosberg: “The white flag is too late, you need to move the white flag earlier. That needs to be done immediately.” #F1 #BrazilGP

If that’s not a last cry of desperation, I don’t know what is. Utter sodding madness.

For whatever reason, the cars sound awesome as they go past the media centre towards turn one. Really nice whistle to it.

Following Daniel’s accident in FP1 there was a lot of heat soak, which may have damaged some engine hydraulic components. #BrazilGP

Jenson Button was unhappy with his car’s balance.

Button: “Lot of bouncing, especially through loaded corners like turn 5. A proper bounce, you actually feel it through the steering wheel.” — F1 Fanatic Live (@f1fanaticlive) November 7, 2014

Hamilton is told to stay out for the VSC test. “I don’t need to do the Virtual Safety Car test,” he says. “We’ve been asked to,” he’s told.

I think the only tweak needed to F1 virtual safety car concept is to put a real safety car on the track. That should solve the problem.

The soft tyre is not enjoying long runs around Interlagos. This is Rosberg's front right after 10 laps #bbcf1 pic.twitter.com/FgvzPLgKGO

This picture from Austin made for an interesting debate between Formula One’s current medical car driver and former doctor.

@former_f1doc unclear to you perhaps, because you’re looking at a picture on Twitter. — Alan van der Merwe (@alanvdm) November 7, 2014

If we all pitch in we could get a Marussia logo on the Caterham car for Abu Dhabi.

Nice to see Sam Michael have to chance to use the FIA press conf to say goodbye to F1 at his penultimate race with McLaren — Adam Cooper (@adamcooperF1) November 7, 2014

Rob Smedley: The weather will be different over the weekend so we need to learn from today but be prepared for a different track in #Quali

Smedley says Alonso not going to Williams. Clearly, he has made a promise to Felipe and he's going to stick to it.

Not the best way to end up a session but that’s motorsport. Feel very sorry for Checo and the team but I’m sure they will be strong tomorrow

Hot day at the #BrazilGP but good to have @Lotus_F1Team closing up to the top 10. Let’s enjoy tomorrow with rain? #r8main #f1

@dani_juncadella @redbullracing He started asking me how bad the chassis was after the crash. Apparently he thinks you have longer hair…