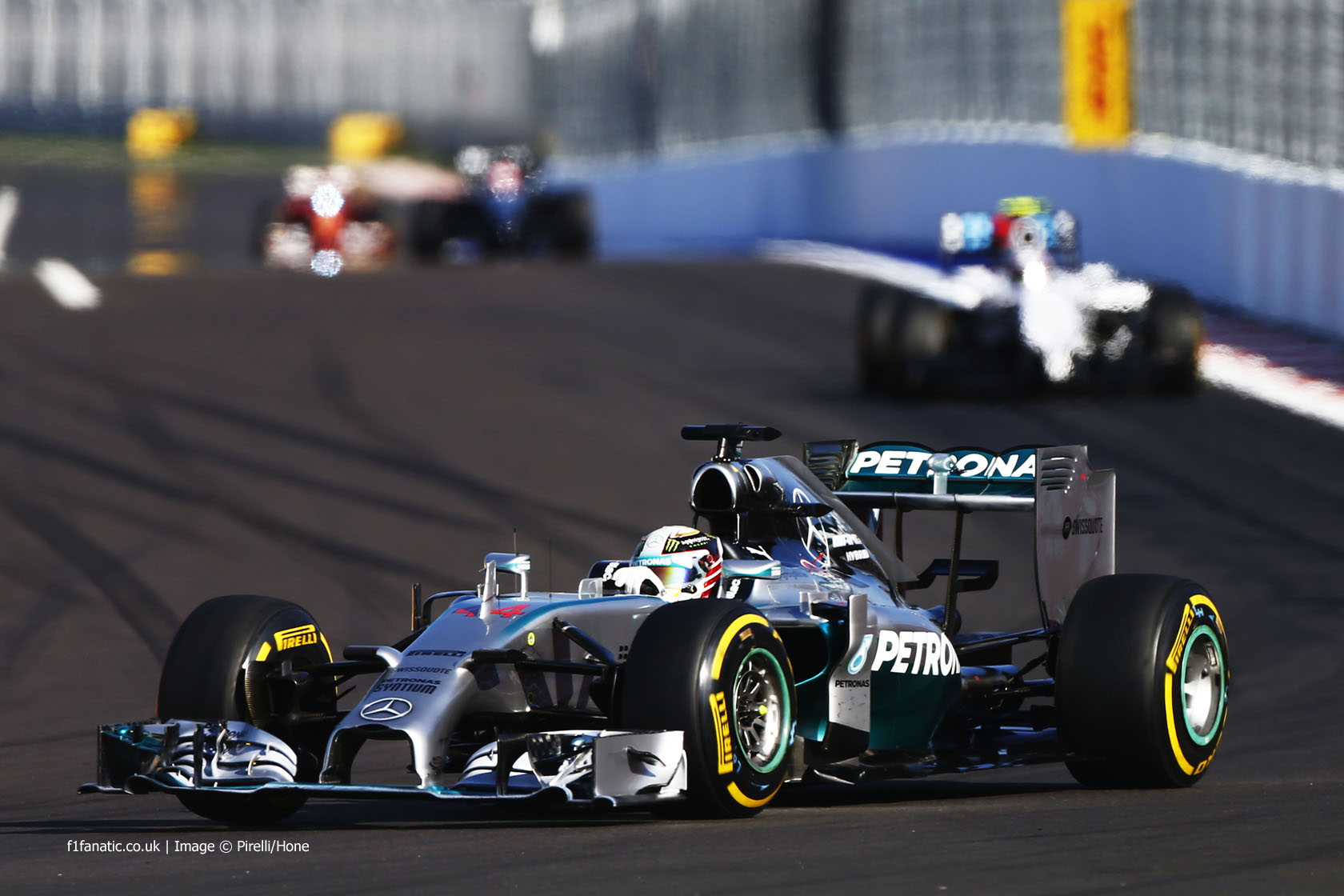 F1 Fanatic readers have given their verdict on 127 races since F1 Fanatic began Rate the Race in 2008. Several of this year’s races have featured among the most popular during that time.

However the first ever Russian Grand Prix was not one of them. In fact, only three races had lower scores than the first grand prix at the Sochi Autodrom.

Tellingly, two of those took place at a venue Sochi was most often compared to – the Valencia Street Circuit, former home of the European Grand Prix.

Apart from a hectic first couple of laps at the start, during which Nico Rosberg lost any chance of winning the race after a mistake in the first corner, little happened during the race.

While the track configuration drew much criticism, the highly durable tyre meant the race lacked much in the way of a strategic dimension. Along with the never-ending tyres, many teams struggled with fuel consumption due to the stop-go nature of the tack. These factors resulted in a rather processional race with drivers coasting to make the chequered flag.

Here are a selection of your comments on the race.

Amid the almost entirely negative response there were a few positive comments. Those looking for an upside mainly had to settle on the fact that the race was reasonably well-attended, although the number of tickets on sale was well below that offered at other rounds of the championship.

Except for the first three laps (in which most of the drivers were disobeying the track limits around this really poorly designed circuit) pretty much nothing happened except for a spin, some pit stops and some undramatic overtakes. Turn two made me incredibly angry, what a stupid, stupid corner.

On the plus side, the scenery was nice.
@Craig-o

As with all these Tilke tracks, they do not have any aesthetic appeal on a television screen – it is very difficult to tell one part of the track apart from the other. Everything is just a sea of white walls, massive run off area and flat curbs painted on which drivers can drive over like they’re not there.
Matthew Coyne

The track is horrible. Did you see the shots from the helicopter? It is Caesar’s Palace, Valencia, Yas Marina and Korea all rolled into one neat package: huge empty space with a few posh buildings, endless run-off areas that you can abuse (just check out the first laps of GP2/3 races for some blatant ignoring of track limits), and overall boring looking track on television.
@Kaiie

Don’t see why people are giving it such a low score? There was overtaking, there was a good amount of close racing and on the whole I quite enjoyed the race on this nice new circuit.

Not brilliant but not so bad and plenty going on to keep me entertained through my lunchtime.
RogerA

Didn’t mind the track – seemed more interesting than Valencia, in any case. But the race was rather dull.
@Rocketpanda

The circuit layout is unbelievably dull, with no variety at all. The excuse that has been used by Tilke is that there was little room to play with, which is totally false if you look at how much space there is available.

Turn two is one of the worst corners in the world, since any overtake either results in one driver running wide or a collision.

The fuel consumption issues meant that many drivers didn’t push throughout the race, resulting in the procession that was the 2014 Russian Grand Prix. Not at one stage did the race feel exciting. The entire event just lacked colour.

The only positive thing I can say is that the turn-out for the grand prix was great, more than 50,000 people present. It’s a shame they didn’t get to see the excitement F1 usually offers.
@Andae23

It really feels like fuel economy and difference in engines played the most prominent role in this race. GP2 and GP3 really showed that racing can be good here.
@Njoydesign

This has to have been the worst race for a long time, a race where apart from the start almost nothing happened. It is unbelievable. here we go again processional racing from lights out to flag for the first time since I started watching F1 I actually wondered what the point in sitting watching for three-plus hours was.
@ck2000 It is understandable that Pirelli chose a conservative tyre compounds for the first race on a new track. The rules force drivers to make at least one pit stop, but Rosberg’s race indicated drivers could have done the entire race on a single set.

I think next year they will bring the soft and super soft and we may well see a different race. The tyres and their wear provides us with a lot of the racing we see in many races – the track layout itself lends itself to several overtaking opportunities.
@Kaiie

The fact that Rosberg could do almost the whole race on one set of tires and still be setting fastest laps near the end, meant that the race was more like the Bridgestone days rather than the designed to degrade philosophy F1 has adapted in recent seasons with Pirelli.
@Pja The high-profile involvement of controversial Russian president Vladimir Putin in the race drew further criticism. Many felt the grand prix had been hijacked for political ends – something Bernie Ecclestone expressly denied would take place.

It was a shame there was not much action, but the whole race was over-shadowed by Putin using the race as his toy. He just made the whole thing awkward to watch by showing up in places that do not merit it.
@Scottie

Putin shaking hands with the guys on the podium disgustingly involving them in his politics. Just like some former dictators have done. Had to give a low rating. Many people – e.g. Ecclestone – say one shouldn’t connect sports with politics. This race was nothing else than politics aiming at supporting Putin.
@Gentleman

I am appalled by the pro-Putin TV direction and the fact that he was allowed anywhere near the podium (what happened to ‘F1 has nothing to do with politics’?). Still, I am trying to rate this race on the on-track events alone.
@Ladym

To all those saying, “Oh, they cut to Putin so much, typical Russian propaganda!” First off, they cut from racing to show Putin three or four times maximum, secondly do you really think that if say the US president or the UK prime minister were at one of the races they wouldn’t show him in the feed?
@Edgethrasherx

Didn’t think it was as bad as people are saying. Just a normal race, plus a bonus point for Putin being there! Can you imagine the Queen or David Cameron going to Silverstone and handing out trophies? This was the equivalent.
@Zippyone