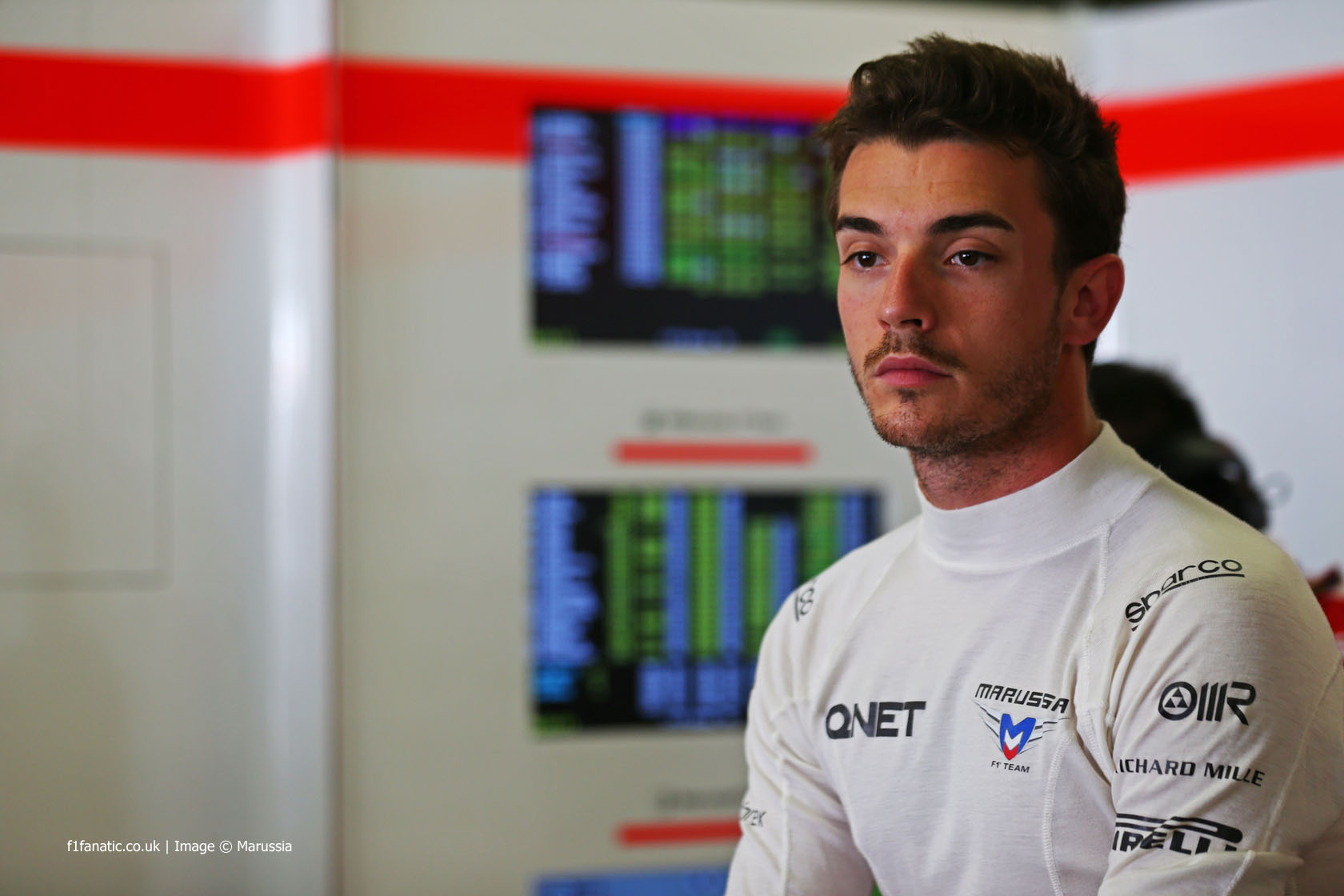 Despite initial concerns poor weather due to typhoon Phanfone would ruin the Japanese Grand Prix, the race went ahead.

But towards the end of the race came the shock of Jules Bianchi’s crash. It was initially unclear what had happened, but the details of his injuries were later confirmed by the FIA.

The account below of how a dark day for motor racing unfolded on social media does not include any of the pictures that were circulated claiming to show different aspects of the crash, for reasons of taste and the difficulty of verifying details of the images.

The entire Formula One community is anxiously awaiting further news about Bianchi’s condition. It is only possible to include a tiny number of the many tributes which were posted.

Bottom line is if it all goes wrong this PM, blame Honda/Suzuka, not the FIA. One might guess that Bernie had a word with them too…

#F1 Charlie Whiting just told us: If weather reports are correct, there will be no race today. More and more rain expected. Too dangerous.

Surely there is a clause in the Promoter's Agreement that allows race time to be moved by governing body if genuine safety reasons/concerns?

#F1 Drivers Parade coming up – in open topped cars. I know 22 young men who are going to be chuffed with this idea. Not. #F1

Lap 3/53 – the #JapaneseGP has been suspended, with all cars now lined up in the pit lane behind the #SafetyCar #F1 pic.twitter.com/jozmq9pFwo

As the red flag appeared on lap two, no points stand to be awarded at the moment unless more laps are completed. #F1 pic.twitter.com/uk8h3Az8Zk

Some drivers lobbied race director Charlie Whiting to bring the Safety Car in. Once he did, Button headed for the pits as well for a characteristic gamble on intermediate tyres.

Jules Bianchi up to 3rd in the Marussia. Things I never thought i’d say in an F1 race

Nice pass by Vettel on Massa, came from a way back. #F1 #JapaneseGP pic.twitter.com/0swe9kcLdF

And an even more impressive pass by Ricciardo, set up on the outside part of the Esses. #F1 #JapaneseGP pic.twitter.com/Ah9gt4SvIv

Vergne: "I cannot drive this car like this. I'm so slow." Pujolar: "Understood. There is more rain expected." #F1 #JapaneseGP

Just as in the Italian Grand Prix, Lewis Hamilton took the lead from his team mate on lap 29.

We have reports of rain…..

That’s got to be the best unlapping move ever by @KevinMagnussen. Hopefully no Senna/Irvine-style recriminations #F1 pic.twitter.com/N3PeorPLcE

Sutril only the second retirement at the day as the Sauber runs out of grip at Dunlop. #F1 #JapaneseGP pic.twitter.com/xVjJuDTg8h

I am bracing myself here after the Sutil incident. We all remember the Morbidelli/Brundle incident in identical circumstances in 1994….

A recovery vehicle was parked in the run-off area next to Sutil’s car while it was recovered under yellow flags. This was what Bianchi hit when he went off, though it was not immediately clear at the time.

The Medical Car is also on the track. #F1 #JapaneseGP

Bianchi appears to be involved in the incident with Sutil. Not clear what happened. #F1 #JapaneseGP

This looks serious. There is another car… pic.twitter.com/bQiFX0Qpty

Fingers crossed for @Jules_Bianchi and Marussia.Concerns because team got no reply on the radio from Bianchi.Could mean something or nothing

Medical helicopter is being prepared for Bianchi we believe. Whole Paddock concerned for Jules. Thoughts and prayers for his wellbeing. #F1

Really not sure that accredited press should be tweeting 'wild' rumours front the paddock right now? Stick to the facts.

Thoughts only with Jules Bianchi … the debate can wait.

Update from @tedkravitz : air ambulance could fly but decision made to transfer Bianchi by road; landing conditions or medical decision #F1

Tough race today in rainy Suzuka. 6th was maximum with the speed we had today. I hope that @Jules_Bianchi is ok and its nothing serious. #77

He’s been taken to Mie university hospital, less than 10 miles away. Ferrari boss Mattiacci and Felipe Massa have gone to be with Bianchi

Jules Bianchi’s injury is a sad reminder that this can still be The Cruel Sport. The F1 community’s expressions of support for him heartfelt

Impressed by the maturity of all the #F1 drivers in their post-race media interviews today. Their concern for Jules Bianchi very evident.

Travelling back to Tokyo on bullet train with GUT and SUT, and RIC and VET are in same carriage. Keeping them updated as best I can

Thoughts with Nicolas Todt tonight as he no doubt relives Felipe’s 2009 accident. Jules is his protege. His shining light.

My thoughts are with fellow driver Jules Bianchi. The whole of the Motorsport world is pulling for you. #F1family ForzaJules