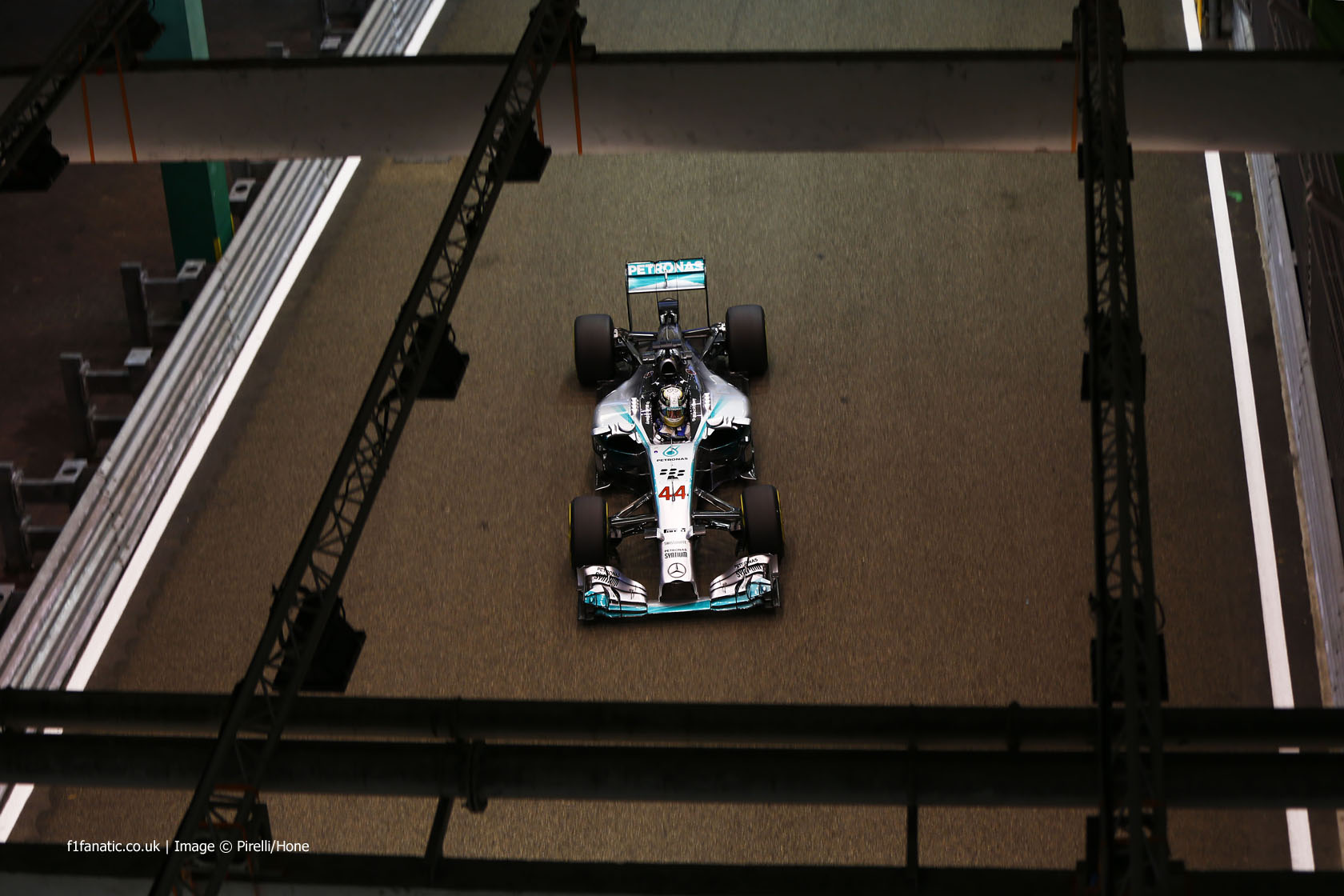 Lewis Hamilton was voted Driver of the Weekend for the second weekend in a row following his back-to-back victories in Italy and Singapore.

However he was separated by fewer than 80 votes from Jean-Eric Vergne, whose charge to sixth place in the final laps impressed many of you. Vergne took one of the highest percentages of the vote for a runner-up all season.

Sebastian Vettel made his third appearance of the season in the top three of the Driver of the Weekend vote after his best finish of the year in second place.

Hamilton began the weekend locked in a tooth-and-nail fight for supremacy with his team mate. In the closest pole position battle since 2010 Hamilton beat Nico Rosberg to the top spot by just seven thousandths of a second.

The battle looked set to continue into the race but those hope disappeared when Rosberg failed to pull away due to Mercedes’ latest technical glitch.

However on a weekend when Mercedes’ rivals were potentially closer to their race pace than at any previous point this year, the appearance of the Safety Car was a trap waiting to trip them up.

It left Hamilton needing to tread a tricky line between opening up a gap to Vettel behind him without hurting his tyres too much. He eventually erred on the side of caution, and his final pit stop dropped him behind Vettel. With the benefit of fresher tyres, however, Hamilton retook the lead with ease in a DRS zone. He emerged victorious at the end of a punishing race which went the full two hours.

This was one of the least emphatic Driver of the Weekend wins we’ve seen this year, and quite a few people pointed out that the absence of any opposition from Rosberg makes it harder to rate Hamilton’s efforts thanks to the pewrformance advantage they enjoy.

Pulled off a hat-trick (almost a grand slam) and proved himself to be (as usual) a stellar driver after the Safety Car, I don’t see Rosberg being capable of doing that, really.

Hamilton had what you call a ‘perfect weekend’, I can’t see how would anyone vote for someone else really.
@Liongalahad

Pole, fastest lap and win. What more needs to be said? Well, OK – I know he was cruising and had no pressure, but when he was under pressure after the Safety Car he delivered some very impressive lap times and didn’t make a mistake. So basically I’m going for the guy who was consistent and fast all weekend.
@GeordiePorker

I don’t think Hamilton deserves this one. I think some people are applauding his qualifying because it was notable for being so extremely close with Rosberg. But just because everyone made a big deal out of it, it doesn’t mean he did a great job. He barely beat Nico in qualifying so I can’t find his pole to be that impressive.

He was merely cruising for the first half of the race because Rosberg retired. That safety car did produce a scare, albeit it was temporary. In reality, because their car is so much faster than the rest, there was pretty much no chance he would have lost that win even if he slotted back in 5th or 6th after his pit stop. Everyone’s tyres were going off and he had fresh tyres.
@Stormbreak

It was close between the Toro Rosso drivers in qualifying as well – Vergne was just six-hundredths off Daniil Kvyat. That was the difference between reaching Q3 and being twelfth on the grid.

From the moment the race started, however, Vergne was the quicker of the pair. Having latched onto his team mate’s tail – and pointed out he was being held up – the team had them switch positions.

Vergne fell foul of the stewards on two occasions for leaving the track and gaining an advantage. Both times he was given a five-second time penalty, and though he served one during a pit stop the other was added to his finishing time at the end of the race.

After the Safety Car period Toro Rosso made the decision to pit him for fresh super-soft tyres so he could go on the attack at the end of the race. Vergne made the most of them and pulled a series of impressive overtakes on Hulkenberg, Bottas and Raikkonen to move into sixth.

He then pulled out the five-second gap he needed over them so he could take his penalty without losing a sixth-place finish which equalled the best of his career.

What he did with the Toro Rosso was amazing. The overtakes were precise and well timed and the drive was stellar. He made a few mistakes but it goes to show that if you’re willing to take risks, you can reap the rewards.
@Kodongo

Vergne pulled off some great overtaking moves and despite having penalties, managed to put a Toro Rosso in its best position for a long time.
Uzair Syed (@Ultimateuzair)

Vettel’s preparations for the race were disrupted by yet more technical trouble. He still managed fourth on the grid behind his team mate, yet was still disappointed after he said he believed his car was quick enough for pole position.

At the start he got the jump on the slow-starting Ricciardo and was gifted second by Fernando Alonso after the Ferrari driver ran wide at turn one. He retained this until the second stint when Red Bull opted to switch him to the soft tyre and he used the Safety Car period to run a 35-lap stint to the end of the race and secure his best finish of the season.

He qualified close to his team mate even though he missed second practice. He made a good start, but he lost out to Alonso during the first pit stops.

He was lucky that Ferrari decided to pit Alonso during the Safety Car, but it meant that he had to nurse his tyres until the end, again despite not doing a long-run in second practice.
@Andae23

58 comments on “Hamilton beats Vergne to Driver of the Weekend”