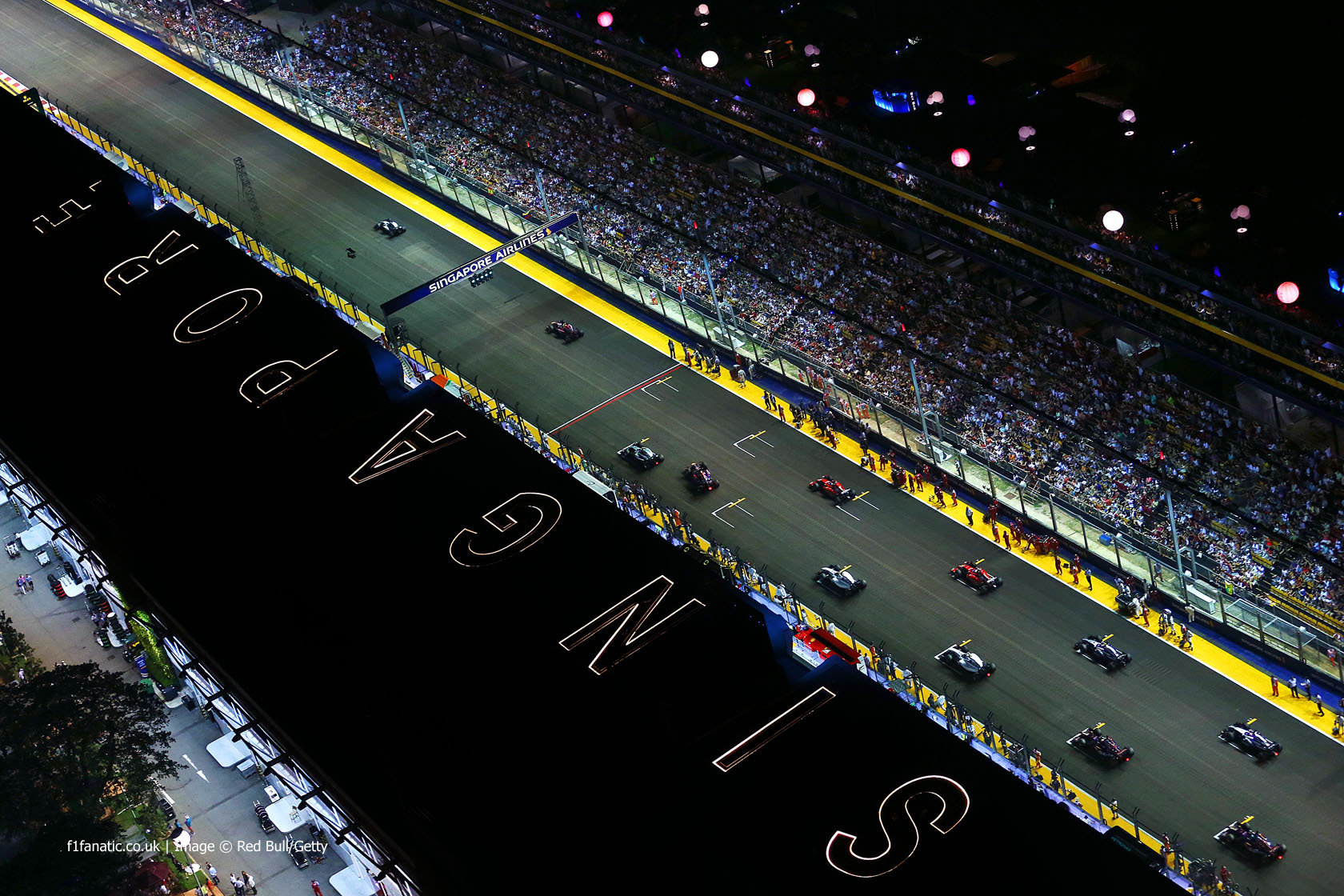 After one of the best and most closely-fought qualifying sessions of recent seasons, with most of the grid separated by only a couple of seconds and the championship rivals occupying the first two grid slots, an epic night race under the lights of Singapore was on the cards.

Sadly the excitement of qualifying didn’t translate to the race. But although its average score from F1 Fanatics of 6.4 out of ten was on the low side for this season, it ranks as the second-best of the seven Singapore Grands Prix so far.

The prospects of a close fight for the lead took a major blow when Nico Rosberg was struck by Mercedes’ greatest foe this year – unreliability.

After qualifying just seven-thousandths of a second behind Lewis Hamilton, Rosberg had to start from the pits and eventually retired.

The Safety Car added some variety to proceedings, but it stayed out for over 20 minutes which many people thought was excessive given the fairly minor incident which provoked it. When the safety car finally came in we were at last treated to some action, however most of it was down drivers who were nursing old tyres being caught by those who had put on fresh rubber.

Here’s what F1 fans had to say about the Singapore Grand Prix.

Singapore provides a stunning backdrop for a race but is the track itself up to scratch? This was a focus of criticism for several viewers after the race.

Horrible race. Always boring. Singapore is an awful circuit, especially for TV viewers. The organisers try to compensate the lack of scenery with ‘pyrotechnical’ effects (lights and fireworks). I hope FIA cancel it very soon.
@Regulus

Not a very good race overall. However, it was quite typical Singapore race, first stint has been boring in most outings.
@Bleu

Like Monaco, it’s not really a racing track. A lot of peripheral glitz, but the circuit just isn’t conducive to racing action, the only excitement comes from crashes and inevitable Safety Cars.

Okay, there’s the skill of avoiding the walls, but when you compare to the amount of racing we’ve seen this year on more open circuits, I think one Monaco-like circuit is more than enough. F1 certainly shouldn’t be thinking of adding more, but since when has Bernie Ecclestone followed any logic other than money in his pocket…
David BR2

This track is simply uninteresting and frankly, the length of it is the only reason there’s any challenge. If it wasn’t for Suzuka and Interlagos, the last part of the season really does have the poorest tracks and, often, races.
@Npf1

It might be a great time for the attendees but as far as racing this track is just a dismal excuse for a real race track, by its very nature it makes for a train ride for most of the cars and drivers. Unless your car is extra-fast you probably won’t pass anyone. The ‘Monaco of the east’ does not do it for me.
@Racernorriski

The Safety Car was summoned after Sergio Perez broke his front wing while trying to overtake Adrian Sutil. It held up the race for seven laps, and as a result the Singapore Grand Prix was stopped one lap short of the planned distance.

That long Safety Car got a little boring and then letting the backmarkers through and waiting for them takes too long.
Ay Ce

I was watching the race, seated at the Padang straight. Incidentally, also the exact spot where Perez’s wing decided to disintegrate.

For the people who were saying the Safety Car period, was too long, I have to say it was required. Lots of bits of carbon fibre were spread all over, and the marshals stationed there did the best they could.
@Goondu86

There were a lot of fans that enjoyed the race but the mass of critical views dragged the overall score down.

I enjoyed it. Perhaps more for what could have happened than what actually happened, but I was watching very carefully this time. It was an eventful race especially with Rosberg’s troubles. We didn’t get to see his potential for a single lap but Hamilton didn’t run away, Vettel held off Ricciardo, strategies mixed up and the Safety Car made the end very good.

Perhaps the battle I was most sad not to see was Vettel-Ricciardo-Alonso at the end, while at the same time Bottas’ defensive driving kept me enthralled. It seemed like something was happening all the time, so a high score is deserved in my opinion.
@Fixy

It was ok, I guess. Not something close to previous races but it had a couple of battles, a good finish and some interesting strategies. It also gave more drama to what is a great championship battle. I was expecting more action for the lead though, especially after a fantastic qualifying session.
@Dimitris-1395

Worst race in a while, and I have previously enjoyed this two-hour endurance race. Rosberg’s non-start pretty much ruined the race. Then it was just cars going round with at least three second gaps for 30 laps, a competition caution, and repeat.

The Safety Car ruined some of the strategies, and Mercedes’ pace ruined the excitement for the lead. And once again, it was impossible to overtake without a huge difference in the tyres.
@Kaiie

After the Safety Car it became much more interesting and the last few laps were generally great to watch. The battle for sixth especially. It’s a shame there were no overtakes for the first five positions (except for pit stop passes).
@rigi

Terrible race. Even the drivers on the podium looked bored.

Just watched the highlights, and even they were too long. The formation lap was more exciting than all of the rest of the race put together.
@Hairs

Maybe we have been spoilt with the quality of races we have had this season but overall it didn’t seem that good with most of the action coming at the end and that was only because some cars were on fresh rubber and some were struggling with old tyres.

Rosberg’s car problems meant we didn’t get to see an on track battle between the two Mercedes drivers, but it does mean the championship battle is effectively reset now.
@Pja