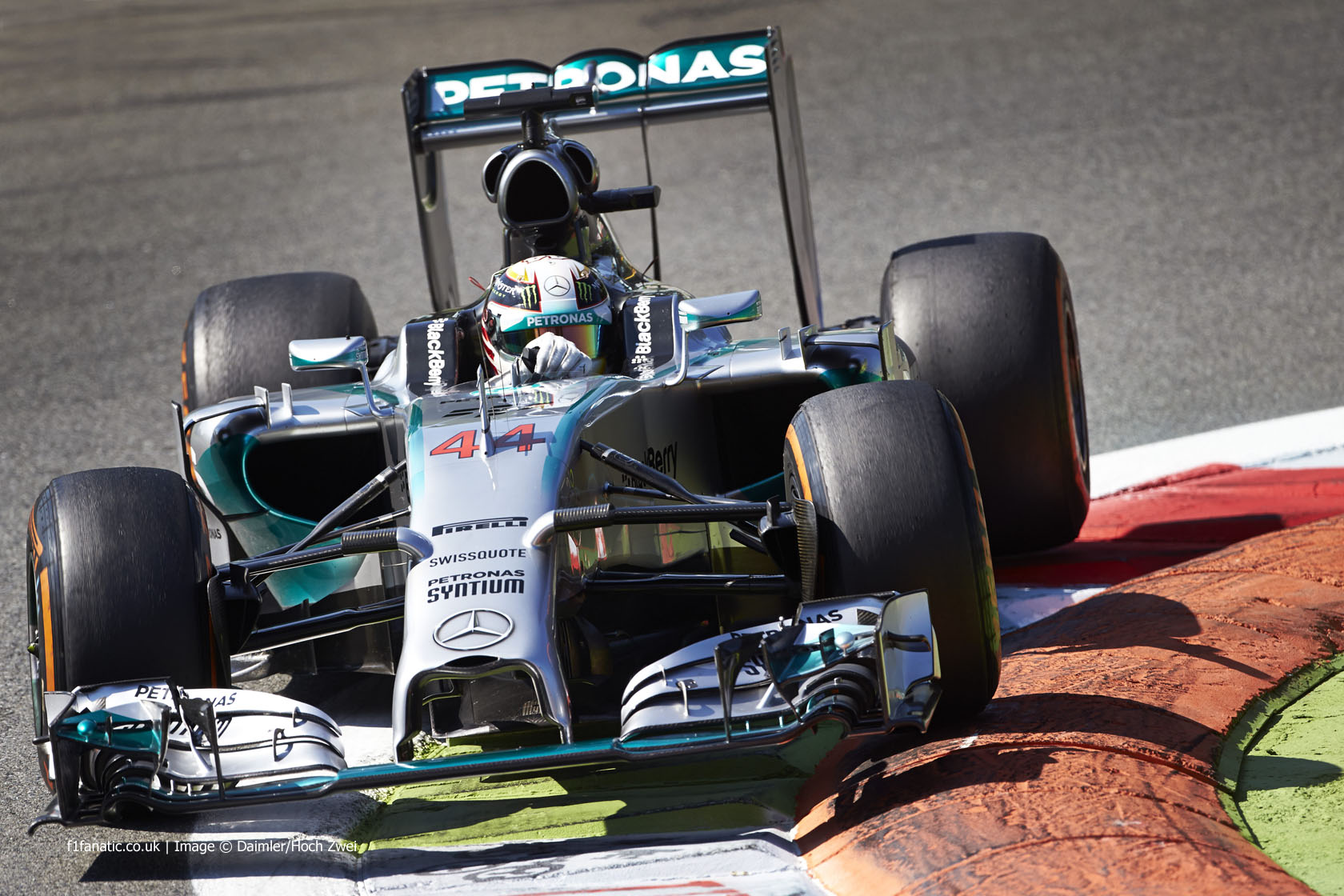 The Italian Grand Prix saw Lewis Hamilton take his first pole position since Spain and his first victory since Britain – and he duly won the Driver of the Weekend poll for the third time.

It wasn’t a straightforward lights-to-flag victory for Hamilton, who had a problem with his car at the start and had to make his way back to the front having fallen to fourth.

This marks Hamilton’s eighth appearance in the top three of the vote this season, while team mate Nico Rosberg is still yet to win a Driver of the Weekend vote this year despite leading the points standings with six rounds remaining.

Daniel Ricciardo was voted second after his late race charge which included an impressive pass on team mate Sebastian Vettel. This is Ricciardo’s ninth appearance of the season and means he has now been voted in the top three for the last four races. Sergio Perez scooped 12% of the vote to take third.

Driver errors or mechanical failures in the last six qualifying session had kept Hamilton from pole position but he finally broke the chain in Italy.

He looked to have the upper hand from the first practice session, and would probably have topped all three had he not suffered more mechanical trouble on Saturday afternoon.

Nonetheless he secured pole position, but within seconds of the lights going out he lost the advantage to to a fault with his car’s starting system. That left him needing to pass Felipe Massa, Kevin Magnussen and team mate Rosberg to reclaim the lead.

Magnussen and Massa were picked off during the first stint. Radio messages indicated Hamilton was advised by his team to hand back from Rosberg and conserve his tyres following his single pit stop, although in an un-broadcast message he was also told “if you think you’ve got an opportunity you take it”.

That he did – when Rosberg out-braked himself at the Rettifilio second for the second time Hamilton was perfectly placed to take advantage.

This was his weekend all the way. Led two out of three practice sessions (would have probably been all three if not for his second practice glitch), led all three qualifying sessions, won the race, fastest lap.

He also stayed calm after his RS mode problems and went on to prove that racer’s instinct trumps strategist’s analysis.

He couldn’t have done any more to prove that he was completely over what happened in Spa, and he’s given Rosberg a lot to think about.
Lewis McMurray (@celicadion23)

Faultless all weekend, comfortably quicker than his team mate, and was only held back by technical failures outside of his control. Won anyway.
Pete (@repete86)

If this was driver of the race then I would have given it to Ricciardo due to his overtakes, but for whole weekend it has to be Hamilton.
Duncan Brokensha (@broke84) Ricciardo was out-qualified by Vettel in Italy – the scoreline between the pair is now 7-6 against the four-times champion – but hit back in the race.

He got a poor start and ran a long opening stint, but that allowed him to go on the attack with fresher tyres in the second half of the race.

After picking off a string of rival teams’ cars he put a lid on another impressive performance by outfoxing Vettel with a cunning move at the Roggia chicane to take fifth.

I’m aware of the fact that his team mate was quicker all weekend, and that Hamilton was unbelievably fast all weekend. But the race craft Ricciardo showed beats the raw pace Vettel, Hamilton or anybody else showed in my opinion.

Yes he was on better tires, but that doesn’t make the moves he put on Button and Vettel etc any less impressive. In my opinion he had an ‘Alonso 2012’ kind of race.
@Me4me

I could not help ignore his massive late charge although on fresher tyres. The Renault engine was nothing compared to the Mercedes, and still he bought the horse (bull) home pretty well.
@Tmax Perez decisively put one over Nico Hulkenberg at Monza, although damage was found on his team mate’s car after the race.

Nonetheless Perez did the better job in qualifying and it was clear from his team radio messages during the race how impressed they were with his performance.

He made the most of his opportunity and prevailed in a fantastic clean fight with Button. Perez also showed restraint by not getting into a battle with Magnussen – whom he did not need to fight due to the McLaren driver’s penalty – and kept Force India in the thick of the championship fight with the silver cars.

Perez thoroughly out-qualified Hulkenberg, which is no easy feat then did a great job in the race with a car that didn’t seem as fast as the McLaren. Managed to keep Button at bay and caught up to Magnussen to claim an eventual seventh.

Hamilton, Ricciardo and Bottas were good, but I felt Perez was the only one who outperformed his car and team mate consistently. Plus his duel was by far the most exciting of the race.
@Bs