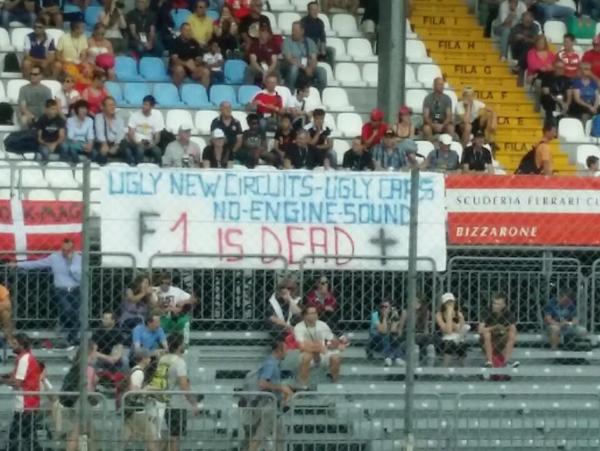 A banner produced by a group of fans criticising current Formula One led to teams being quizzed on the state of the sport during today’s press conference.

Other people were much happier with F1’s arrival at Monza, particularly Roberto Merhi who made his practice debut for Caterham.

“My dream finally came true and I drove a Formula One car out of the garage for the first time in my life,” he said. “The car was pretty quick on the straights and the first outing was amazing when I went full on power, a very nice feeling.”

Here are more of the Twitter highlights from Friday at Monza.

Juncadella will drive in the first 30 minutes of practice for Force India before Perez takes over. First time that rule's been used. #F1

Both drivers talking about the Parabolica run-off area in the initial feedback. What did they say? Well that would be telling wouldn't it :)

So far @nico_rosberg is doing a much better job of not running into @LewisHamilton. #F1 pic.twitter.com/yhEeZk5f85

RT @Pengumile: Green rain light on the Caterham? @f1fanatic_co_uk [It shows Merhi does not have a super licence, sporting regs article 22.9]

But they're still at the front of the stand for first practice? pic.twitter.com/FoOy7DuKpm

Problem for Magnussen whose head rest has worked loose on his McLaren. #F1 pic.twitter.com/6psmyhWgrF

During this weekend, our car will feature two stickers devoted to honouring and remembering our friend 'Gadget', who recently passed away.

Gadget, whose name was Gary North, joined the team in 1995 in the Jordan days and had been a stalwart of our team ever since.

Poor old Parabolica, neutered by tarmac … No more teasing your way to the limit, just chuck it in and run wide if you need to.

With some drivers not far from getting grid penalties for using more than five of a single power unit element, FOM have introduced a useful graphic.

Monza from the Heli telly. It's brilliant up here! pic.twitter.com/Z9h35kaBsL

After missing the morning session, Romain Grosjean struggled in the afternoon, leaving the track on several occasions.

Back in the garage, @RGrosjean reports a lot of understeer. Especially through the gravel. #FP2 pic.twitter.com/huw2uQBgDl

@f1fanatic_co_uk Jenson Button was quickest in Q1 at India 2013, but that's been it

It's getting bright out there. Hulkenberg: "I will need my other helmet with the dark visor for the next run." "Copy that Nico." #F1

Interesting how many drivers are missing braking zones, always difficult over 210mph but it seems especially tricky this year, #MONZAGP2014

An electrical problem limited Lewis Hamilton’s afternoon running, but some quick repair work by Mercedes mechanics at least allowed him to do 16 laps.

"Great work to get the car back out today guys, appreciate that". Well said that man @LewisHamilton #NoSPArring #F1

And now a question from Friday presser legend Dieter Rencken. Let me tell you something: #NoSPArring! :)

So the team bosses in the FIA conf reckon sport and politics aren't connected when it comes to Russia. Kids, welcome to the 70s.

Ironic that while team bosses were deflecting questions on Russia to FIA, Jean Todt was in the room next door. They should have asked him in

Flav courting media in the Monza paddock. Another marvellous advert for the sport!🙏

Not our easiest day on a race track here at Monza! Let's work for some improvement tomorrow #r8main @LotusF1Team pic.twitter.com/Q0g0oUciLA

@ianparkesf1 @emmofittipaldi This is the sort of thing that should happen OUTSIDE the paddock -available to fans not just hoipoloi.

Did more than 340 kmh today! Such a cool track to drive. Big push tomorrow! #goodnight

Away from the track, McLaren Reserve Driver @svandoorne steps up to the #ALSIceBucketChallenge: http://t.co/erbqcULy7N #GoStoff

McLaren’s Stoffel Vandoorne took pole position in GP2, while championship leader Jolyon Palmer will start tomorrow’s feature race from the back of the grid.

A cracking drive from McLaren Reserve Driver @svandoorne in today's @GP2_Official quali makes it two poles in a row. #BelieveInStoffel

Very disappointed to be starting last tomorrow after a technicality post qualifying. More motivated than ever. Head down, move on