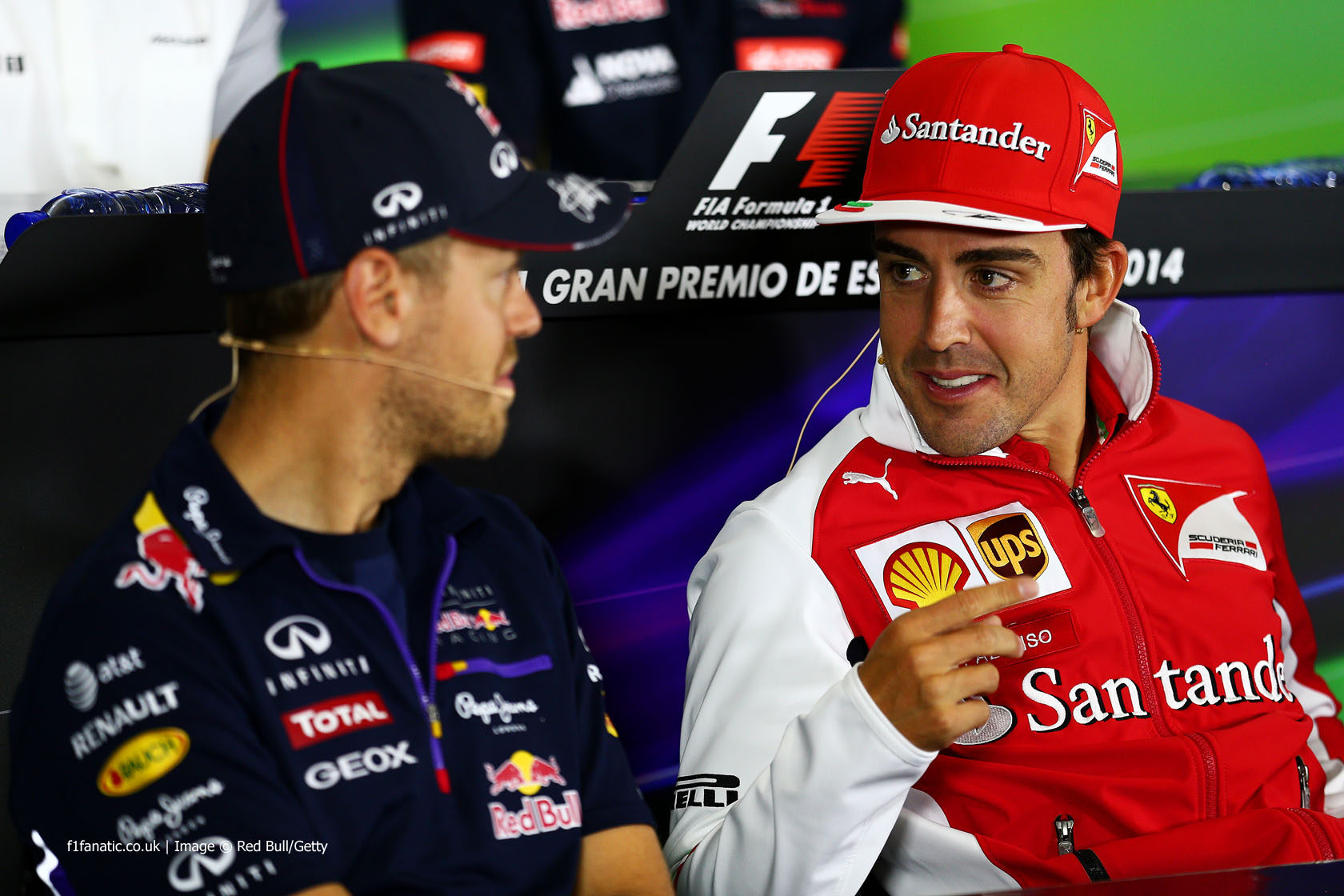 In the round-up: Ron Dennis says McLaren intend “hire the best drivers” as the team are reported to be pursuing Sebastian Vettel and former driver Fernando Alonso.

Ron Dennis: “McLaren will always make efforts to hire the best drivers available. If such opportunities arise, we’ll appraise them; we always have and we always will.”

“It is understood that McLaren has been told it will get an answer from Vettel and Alonso very soon, and it wants to sort out its 2015 driver plans before the final flyaway races that begin with the Singapore Grand Prix next month.”

“At the moment we need to be concentrated on the championship and not get involved in contractual discussions or intense discussions, because it is something that is one and a half years away from us.”

“Red Bull’s human resources department created a stir recently by advertising for personnel to work on ‘our Formula One power unit.'”

“At this point (moments before the contact) Nico knows he has no chance to get the move done. It’s strange that he tried to come in so tight behind Lewis.”

“After receiving immediate attention at the site, both men were taken by ambulance to the Cesena Hospital, where neither men is in a serious condition.” “Many people ask me why my tracks have long straights in them. First, it’s good for F1. But circuits need to be successful all-year-round and when clients pay for track days they want to feel high speed. The easiest way for them to achieve that is down a long straight; that’s also why we do it.”

Miles away from Lewis Hamilton and Nico Rosberg (MotorSport)

John Miles: “Next morning when I came down to breakfast, Jochen [Rindt] was sitting there eating a boiled egg. I said to him, ‘For me, without wings this car is dangerous.’ He just said, ‘You’ll be all right, John.’”

“As I do once a week since the trial ended I have checked to see whether [Bernie Ecclestone] has been put back as a director on the boards of the various F1 companies. There is no sign that this has happened. That doesn’t mean it hasn’t happened because you don’t have to file such things immediately, but it is a suggestion, nonetheless that, despite the rah-rah and the cheerleaders, change is in the air, even if it is only in the planning stages.”

Hamilton ‘victim’ complex rivals that of Senna (The Telegraph)

“For a man paid north of £20 million a year to make 10 decisions through the compression of Eau Rouge, Hamilton makes some astoundingly cement-brained calls the moment he lifts the visor.”

Time to put back on those 6kg I lost for this season since next year the weight limit goes up 10kg lol… http://t.co/JdKBA1LeqD

Understand the Mercedes photo shoot with Rosberg and Hamilton went ahead as planned yesterday.

To the 92% in favour of free racing, what sanctions would you impose for breaking the ‘no contact’ rule? #F1 pic.twitter.com/maSNEX7ew8

Wonder where @MercedesAMGF1 are going with this https://t.co/JUzMjRuwTy Preparing the ground before announcing a sanction for @nico_rosberg?

Can anybody control two drivers fighting it out for a world championship…No.

@alanbaldwinf1 I don't knoiw why anyone goes as a fan. They get treated terribly and the FIA does nothing to help.

Oh no FOM have finally cottoned on to @canalplus' region free access to their onboard video footage :(

Sergio Perez’s race engineer Giampiero Lambiase will be the voice in Sebastian Vettel’s engineer next year:

I met and had a long chat with Gianpiero Lambiase once (in which he spent most of the time saying how fantastic a driver Perez is and how hard done he was by McLaren) – lovely guy and will no doubt do a fabulous job at Red Bull. Big step up for him – congratulations!
@Mouse_Nightshirt

Unusually for a race in 2004 Michael Schumacher did not win the Belgian Grand Prix ten years ago today. But he did finish second, securing his seventh and final world championship, and his fifth in a row.

Victory went to Kimi Raikkonen, while Jarno Trulli started what turned out to be his penultimate race for Renault from pole position.

107 comments on “McLaren target Alonso and Vettel in driver market”