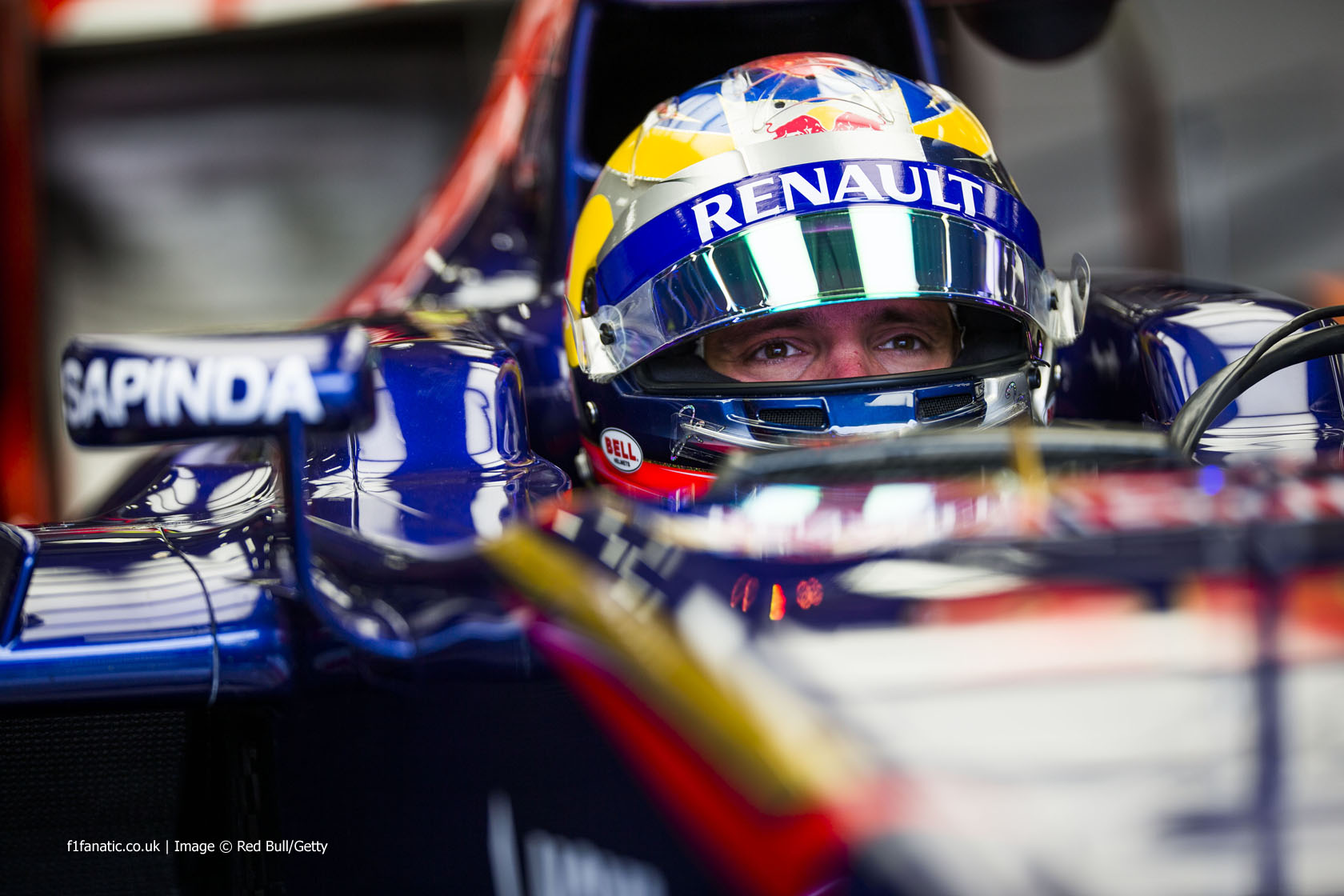 In the round-up: Franz Tost says outgoing driver Jean-Eric Vergne is Toro Rosso’s best driver who did not make it to Red Bull, as Sebastian Vettel and Daniel Ricciardo have done.

“From the drivers so far I think he is the best, yes. Although Sebastien Buemi also did a good job and is also a highly-skilled driver, which he shows at Toyota.”

“I have seen a very strong Bernie coming back from the shutdown, coming back after the court case has been settled. And this is good news.”

Belgian GP steward: “It took 10 seconds to decide there was no case to answer (James Allen on F1)

Belgian Grand prix driver streward Emanuele Pirro: “How can you say that a driver does something like this on purpose? Rosberg did not have a chance to pass and usually in such situations, it’s you who crashes and loses. But if he wasn’t happy, it’s because of the little bit of sporting cunning.”

Christian Horner: “We need to check to see if anything has actually broken on the car. It was extremely unusual what we saw.”

“We are also pleased to confirm that Gianpiero Lambiase will be joining the team next season to work as Sebastian [Vettel’s] race engineer.”

Decoding the code of conduct (Sky)

“In Rosberg’s interpretation of racing etiquette, Hamilton transgressed in Bahrain, but not in Hungary. But we are talking here about individual drivers’ interpretation of what is acceptable – not of breaking any sporting rule.” “Who was your first hero when you were a child?
Jules Bianchi: It was Michael Schumacher. When I was young my life revolved around motorsport. I started go-karting when I was three years old and then I watched Formula One and I liked Michael because he was winning at the time.”

“While [Tavo] Hellmund’s name was rarely heard inside the fence on the weekend of the first race, [Bernie] Ecclestone actually paid for a sign saying ‘Get well Gustavo’ outside the gates of the circuit, when the elder Hellmund was ill.”

“His preference for picking and choosing also left him at the whim of others’ financial peccadilloes. One-offs provide little security. That’s why, once the farcical ‘Stanley Steamer’ BRM P207 of 1977 – “There were people there who didn’t want it to succeed” – had holed his reputation below the water line, he penned Merc SSK replicas and retro-look delivery vans.”

#F1 Vettels 5th engine (ICE), that was removed after ignition problem on Friday at Spa, is not damaged and safe to be used again. #AMuS

And another Happy Birthday to Gerhard Berger, who became the first @RedBull Motorsports Athlete back in 1989! #F1 pic.twitter.com/4IQvLHi4yv

Here's a way for Ecclestone to boost #F1's flagging television ratings: live coverage of the next @MercedesAMGF1 drivers' meeting…

@William-Brierty’s thoughts on how Mercedes might defuse the Hamilton-Rosberg row.

The options are limited and perhaps the best option is to merely allow the respected pace of Hamilton and Rosberg establish a pecking order between them. I say that because time is both the most passive and effective healer, what must stop though is the absurd suggestion that Rosberg’s move is anything more sinister than mere clumsiness.

Rosberg is clever, but he is not a genius, so to sacrifice his front wing in the remote hope of hitting the vulnerable inside shoulder of the tyre at a couple a hundred miles an hour would be like trying to swat a fly with a drinking straw. The contact cannot have been intentional, it was merely a clumsy half move that confirms that Nico just isn’t on the same level as Hamilton, Vettel and Alonso in wheel-to-wheel combat.

Yes, Rosberg has now benefited from two “errors” (Spa and Monaco), and yes, the clever Rosberg realises that the psychological momentum of the 2014 drivers’ championship might be the key to the 2015 drivers’ championship too (with Mercedes likely to be able to retain their advantage over a winter with relative technical stability), so a Schuey-esque approach from Nico is feasible, but on both occasions Rosberg’s antics don’t appear remotely malicious.

That does not make his handling of the situation post-race any less abhorrent. I did not require CCTV evidence to tell PC Plod that the Mercedes saloon in the ditch was a fair cop, so why, when it must have been immediately apparent to Rosberg that he’d just ruined Mercedes’ Belgian Grand Prix, did he so stoically refuse to apologise?

Stoic to such an extent that he felt it necessary to insult the intelligence of the booing crowd of European fans (sorry Nico, but the German guy I sat next to was booing too), as mere patriotism on the part of the British; patriotism that is somehow misplaced due to the fact that most fans haven’t read the FIA’s Sporting Regulations cover to cover. There is no more guaranteed method of being greeted on the podium at Monza to sound of a booing Tifosi than to insult that acumen of the sport’s faithful; those on which the sport rely.

I have no doubt that either Nico is trying to mess with Lewis’ head by allegedly saying he was trying to “prove a point” in the post-race debrief or that Lewis is quite rightfully playing politics in the media, but I can guarantee you ladies and gentlemen that the undoubtedly clever Rosberg did not see an attractive offer in the shape of guaranteed front wing damage for the small chance of puncturing Lewis’ tyre but rather put his nose where it shouldn’t have been. That doesn’t mean Nico can be trusted in the future though.
@William-Brierty

Benetton were the focus of more controversy in the Belgian Grand Prix 20 years ago today. Michael Schumacher was disqualified from victory after the plank underneath his car was found to have worn down too much. That handed victory to his championship rival Damon Hill.

An article on this race will appear here later today as part of F1 Fanatic’s retrospective on the 1994 F1 season.