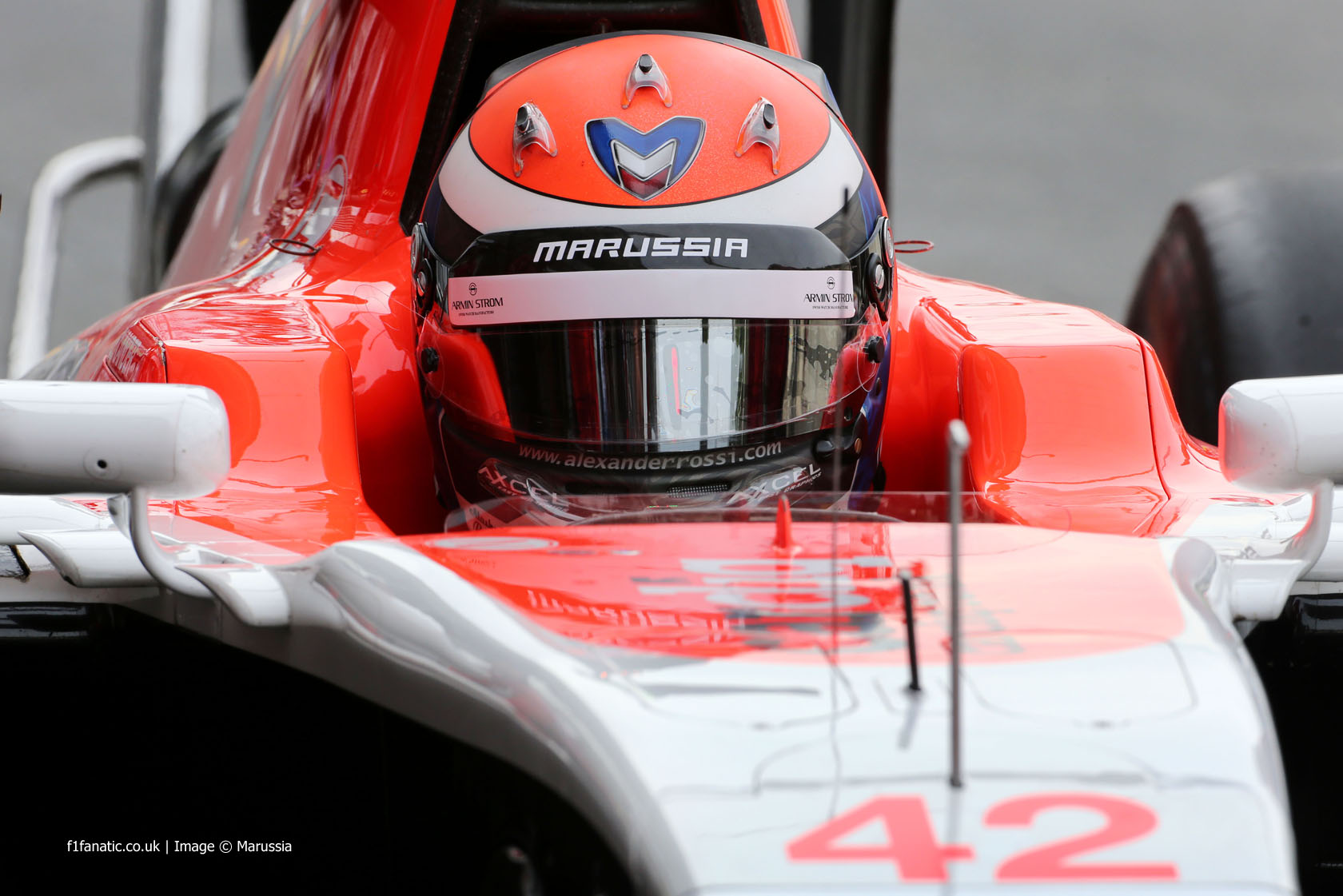 In the round-up: Alexander Rossi didn’t find out he wouldn’t be racing in the Belgian Grand Prix until after the first practice session.

“He found out after the world at large that he would not be driving for the rest of the weekend. The team management told the media during FP1 and the news was quickly circulated, but Rossi himself was not informed until he got out of the car at the end of the session.”

Marussia farce as Chilton reinstated for Belgian GP (The Telegraph)

“‘What everyone seems to think is the issue is not what it is.’ What was the problem then? ‘I’m not going to say that, because then you’ll use it.'”

“I asked somebody the other day ‘have they decided who shot that plane down?’ Nobody seems to know do they, so what’s the link [with Russia]?”

F1 has no argument with Russia, says Ecclestone (Reuters)

“If people have got arguments with Russia, maybe they have (issues). I don’t know. We haven’t got any.”

“It will either destroy him or, even if he is successful right away, then F1 will be meaningless.”

“It’s nothing related to the car or from my side, [just] unlucky.” Andre Lotterer: “I think our Michelin tyres are a bit better, we can push them much harder and do over 700km on one set of tyres and more downforce as well so you can push an LMP1 car a bit more in the corners.”

“Q: Your team boss Vijay Mallya has identified Valtteri Bottas as the surprise of the season. Was that a bit of blow – your boss praising a driver from another team?
NH: No, not really. You have to be realistic and give credit to what Valtteri has done – but Daniel (Ricciardo) has achieved even more in his Red Bull. So no, no envy at all.”

I volunteer to be in F1. Is that how this works? Lol #F1Games

You've got to love a good cheeky Bernie quote. On Max Verstappen: "It is because of social media I am sure. That is why he is coming in."

A lot of people slating Marussia for this, but to be fair Rossi is just their reserve driver, he’s only there for when one of their actual drivers can’t, won’t or isn’t allowed to drive. Obviously Chilton had some contractual issues going into this weekend but now they’ve been resolved the drive is his.

I’m annoyed as well, because I also think that Chilton doesn’t deserve his seat, but the fact some teams in F1 are dependent on pay drivers is less Marussia’s fault than it is the governing body which run F1’s.
Adam Kibbey (@Kibblesworth)

Happy birthday to Innim and Tomas!

A short, bumpy circuit on the Zeltweg airfield was used for Austria’s first world championship race – and never revisited. Lorenzo Bandini took his only F1 win for Ferrari.

Here is some mute footage from the race:

58 comments on “Rossi learned he wouldn’t race after practice”