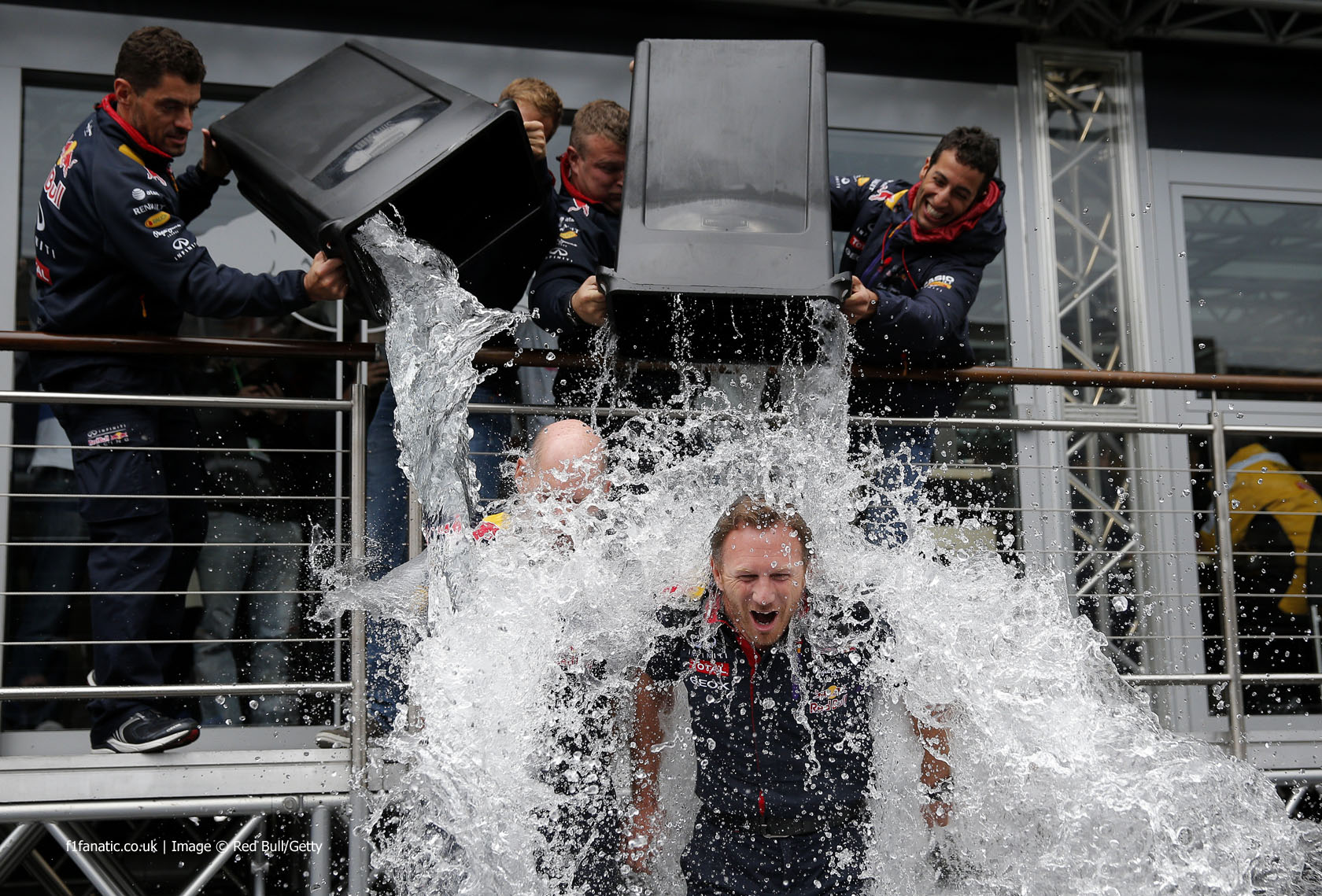 As if enough cold water hadn’t fallen on Saturday at Spa-Francorchamps, the paddock inhabitants added to the downpour as the Ice Bucket Challenge gathered pace.

Here’s A review of Saturday’s proceedings in Tweets.

Typical Spa morning. By the time you've read how wet it is, the sun will probably be shining. And then it will rain again.

Concern for Vettel – some of the brake duct cover has been sucked into the duct and they can't get it out #f1 pic.twitter.com/PElEc02Esw

Button reports that with the track not very wet "we're going to destroy a set of inter tyres". #F1

Per his instructions, Alonso is looking after his intermediate tyres. no heat in these! (Pic via @f1broadcasting) pic.twitter.com/mxzKq0AzBF #F1

Oooops! Kimi misses the window to go out, drives to end of pit lame and has to get pushed back #f1 pic.twitter.com/nU5BYckpBe

Look at this crowd at pouhon, and it's only Saturday! #Spa #F1 pic.twitter.com/A4hHwQlAQa

The track was hit with heavy rain 40 minutes before Q1.

Hailing so heavy we couldn't even talk to each other in hospitality it was so loud. 20 minutes later, sunglasses back on. Casual #Spa

Gannon to Chilton: "Sorry Max we're out of energy on the battery." He's out. #F1

Great performance in qualifying from @Andre_Lotterer. Shaded Ericsson despite so little time in the Caterham

Does @Andre_Lotterer beating Ericsson proves once more there are few drivers in #f1 who shouldn't be there?

Grosjean: "OK there is something wrong. " He suspects the torque delivery under braking. He just spun at La Source. #F1

Kevin Magnussen took seventh on the grid, his father watching from the USA.

Hamilton: "Car's pulling to one side." Bonnington: "OK we can abort this lap. That will leave us one lap on the next tyre." #F1

At the end of the day, 0.228s over 4.35 miles in these conditions is hardly worth looking miserable about. #F1

Just finished my cocktail mixing lesson on the Martini terrace. This is the "Eau Rouge"… 🍸🍸🍸 pic.twitter.com/9k3vGlviVp

Saw some fellow posing for a 'selfie' with Niki Lauda earlier on. The look on Niki's face suggested disdain for this phenomenon…

We're hearing that someone in the paddock hasn't been paid so is receiving space on one of the cars instead.

Ferrari nose much longer and closer to 2015 spec pic.twitter.com/xVusBGTYNE

The GP2 race was red-flagged as the track was too wet to run. After the restart a McLaren junior driver battled with a Ferrari youngster for the victory, with the latter coming out on top.

#FerrariBELGP Congrats to @R_Marciello and FDA for his first win in GP2. Congratulazioni a @R_Marciello ed FDA per la prima vittoria in GP2!

The #GP3 race ends with a red flag as the leader was not shown the chequered flag at the end of the final lap! pic.twitter.com/4wrvWXP26l

A GP3 victory for @TheDeanStoneman, in fact a British 1-2-3-4 with Zamparelli, @NickYelloly and @Jannthaman next up

Second row of the grid for tomorrow. Very pleased and a bit surprised !! Tomorrow aiming to score all the possible points for the team!

Really excited for the race tomorrow. We can charge hard. Qualy was fun, tricky conditions. Had a big moment on my lap but kept it on.. just

Not an easy qualifying today but we are still hopeful for tomorrow. Starting P6 for the race. #BelgianGP #77 http://t.co/cRaC5FEH8u

A lot of question about Eau Rouge in Spa. I can confirm that it was very interesting in wet qualifying conditions… #oversteer #r8main