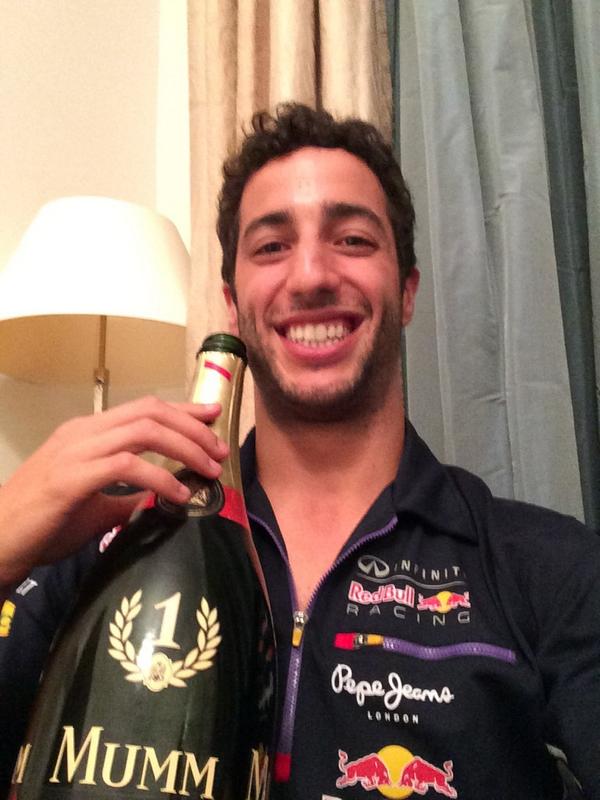 Daniel Ricciardo is ready to get the party started after scoring his second career win in a thrilling Hungarian Grand Prix.

Ferrari were happier with their GP2 youngster Raffaele Marciello than yesterday, while McLaren’s Stoffel Vandoorne won the sprint race.

#GP2 @R_Marciello is doing a great race. This is the best answer to our criticism about yesterday's race. #ForzaLello

Want to know how relaxed @nico_rosberg is today? This is him trying to stop me getting to the gp3 podium. Haha. pic.twitter.com/0vHa3NZs6Z

The Hungaroring was hit by rain less than an hour before the start, which set up an exciting grand prix.

Just left the track and there is MASSIVE rain. That should make the F1 race very interesting! 👍 pic.twitter.com/GAJlpku0cW

Wet t shirt competition at Hungaroring, pissing it down! pic.twitter.com/FWxB4XEZYA

Today's race is special for an extra reason: it's Tom's last race with us, and the crew are paying their respects… pic.twitter.com/oEVVuLXqXm

Heavy frontal impact for Ericsson. The top four come in for their pit stops. #F1 pic.twitter.com/TY5OmvcsTO

Well, that's a first. Haven't seen that message before! pic.twitter.com/K3Uf8RzzUN

Jean-Eric Vergne’s strong showing in the early stages of the race made for an unusual sight, as he passed Nico Rosberg.

Good to see @SChecoPerez climb out after that one. #F1 pic.twitter.com/nlnV82OzDj

Meanwhile, @Ericsson_Marcus is back with us and fine. He had a 20g impact….

Sebastian Vettel was lucky to continue after spinning on the pit straight.

Vettel pays the price for taking liberties with artificial grass on the outside of the final corner. #F1

L42 Raikkonen squeezes Vettel to the limit and no further with an excellent piece of defending in turns two and three. #F1

Can Mercedes really expect their championship-fighting drivers to help each other's strategies now we're this far into the season? #F1

Rosberg demands to know why Hamilton isn't pulling over. Engineer resisting the urge to say "you didn't really think he would, did you?" #F1

For clarification, that extra stop for @nico_rosberg was the reason behind the earlier radio calls – the target being maximising the team…

Good to see FOM broadcasting more Ferrari radio messages regardless of them not being in English. Hope they keep it up. #F1

Wow.. What a race! Good work everyone. Now I'm off to punch who ever made the decision to change into the inters. （←Just kidding😆）

What a result for the crew too – up late into the night building that car and rewarded with a podium finish. Get in there! #F1 #HungarianGP

@mrjakehumphrey limited to 2 questions then back to winner. Podium right moment to celebrate Lewis' drive, not drop kick him with politics

My colleague Mark Hughes to Niki Lauda: What if Ferrari had asked you to move over because Carlos Reutemann was on a different strategy…

Great tactics from @redbullracing and another faultless drive by @danielricciardo spot on…👍👍 proud Aussie .

@danielricciardo got to say mate that was some drive.

Our @redbull young guns. Sebastian and The Team congratulating @danielricciardo after a fantastic win! #givesyouwings pic.twitter.com/GO0UE7Ry3s

Congrats to @danielricciardo !!! Very good drive! Thank you for all the emotions you gave to the crowd! pic.twitter.com/f6eOSNfPxy

Big congrats to Daniel&Fernando. It was so close at the end! Going into the break, I'm still in the fight for the c'ship, which is great!

2 hours of battling & spilt by 0.5 seconds at the end. Tricky conditions but enjoyed it. Big 👍 for @danielricciardo pic.twitter.com/yp7SIkLHBt

I'm very pleased with the weekend, I think it was a good one ;) #F1 #HungarianGP #JEV25 #GOTOROROSSO

Can't guarantee this guy's gonna remain sober for much longer this evening 😇 pic.twitter.com/zSzisUXN1n