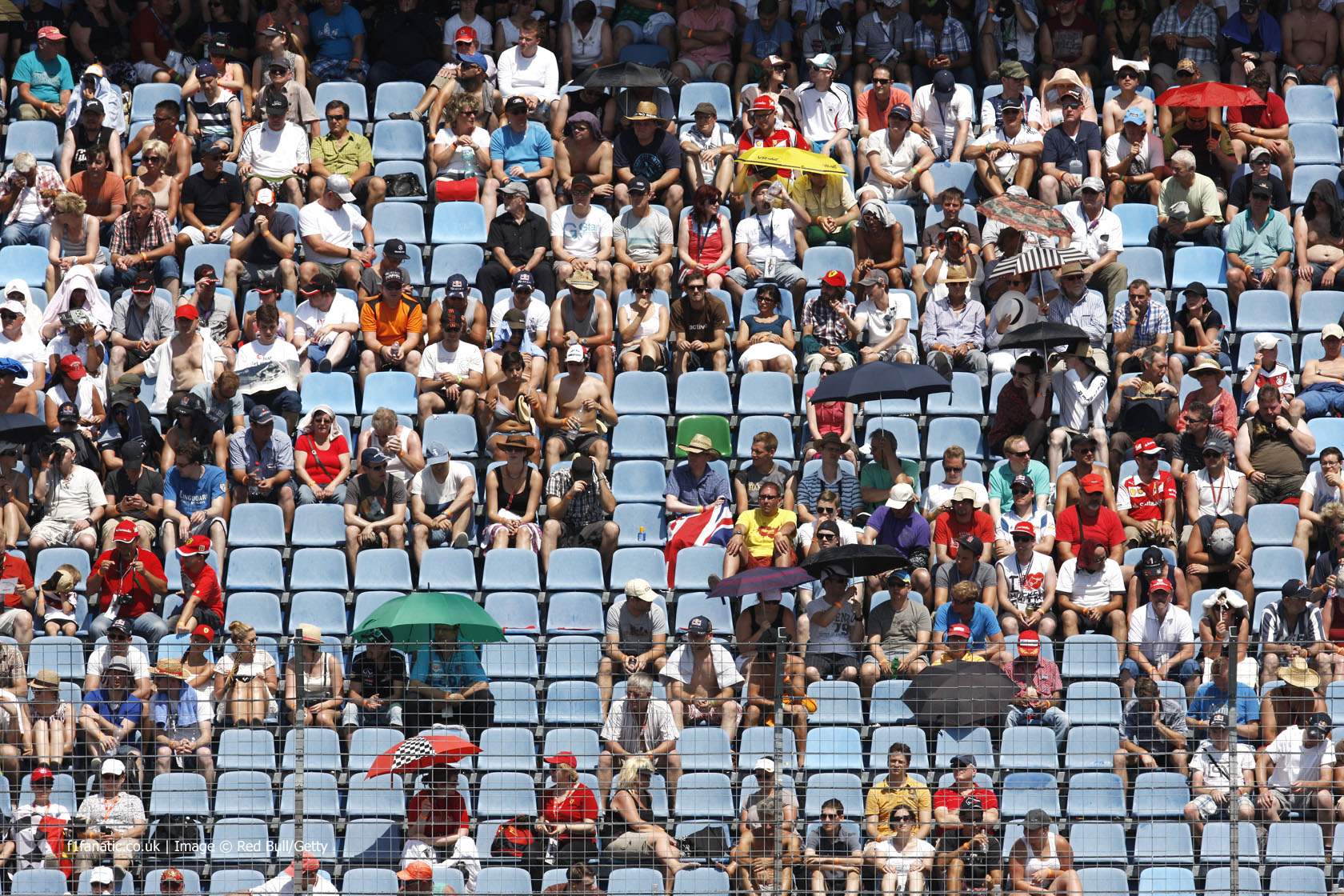 Attendance at the Hockenheimring remained poor on Saturday, providing one of the talking points at the German Grand Prix.

Not exactly full up. #qualifying #germanGP

F1 has to realise it isn’t the “Show” that’s keeping people away. It’s €300 tickets. The price of a holiday for a family of 4 to see a race.

At Hockenheim. The view from Südtribüne Oberrang takes my breath away. You don’t need ear plugs anymore but F1 is still loud.

Race against time for Kimi Raikkonen and his car as the team battle to change the fuel pump for quali #f1 pic.twitter.com/pUMeop49bM

Max is unfortunately delayed while we diagnose an electronics glitch.

Button: “We’re miles away from where we need to be guys. Not got any balance. Braking power is terrible.” #F1

An unnamed person just told me they think the trackside sign should read “Bernie says Think Before You Bribe” :)

Why is it okay to all 4 wheels off the track here and not elsewhere? Ok, no apparent advantage. But more #F1 confusion. #unnecessary

Lewis Hamilton crashed out of qualifying early after a brake failure.

Very unusual to have a disc failure in qual, something you might expect to see late in a race after a team miscalculated cooling etc

Hamilton starts 15th, Alonso's the only driver to win from there, at Singapore in '08. Hamilton won't get help like that from his team mate!

Another great job by Williams, really beginning to deliver on their pre-season promise.

Am I the only one struggling with the conspiracy theory that Merc are hurting Lewis H and favouring Nico R?

Entirely correct by @easonF1. No team would deliberately risk lives by giving a driver faulty brakes. Crazy anyone would think otherwise.

GP2’s 200th race was one of the series’ most exciting, with Mitch Evans winning from 15th on the grid.

Holy moly. What a race! And what a joy to finally have @davidevalsecchi alongside me. I’m exhausted! Happy 200th GP2. You never disappoint

Nico Rosberg took a home pole position for the German Grand Prix. But he also formed what is the closest Formula One has ever got to an all-Finnish front row.

Quote of the day? Nico: “1.5 Finnish drivers on the front row. I think that’s a record, isn’t it?” Raised a titter! #GoetzeStarQuality

McLaren have changed their gear ratios.. The 1 change allowed all season. pic.twitter.com/8oXK8HxVfO

Thanks for all your messages guys. Second row tomorrow is nice. Hope tomorrow will be exciting to watch. I will certainly do my best!

If HAM does start from the pitlane, as expected, he can make any set-up changes he wants. Could be handy if it’s raining…

P5 on the grid for tomorrow. Pretty pleased with my lap, doing what we can. See what tomorrow brings. I’ll be bringing some 🔥

Daniel Ricciardo’s reaction after his unsuccessful attempt to make Simon Rennie smile was shown on the world feed during Friday practice.

Ok so for all of you who saw my moves yesterday and my engineers disgust, here’s proof that he does smile 😆 pic.twitter.com/ydwsMNTFgW

Weather forecast for tomorrow at the Hockenheimring continues to fluctuate. If there is rain, looks like affecting #GP2 & #GP3 but not #F1.