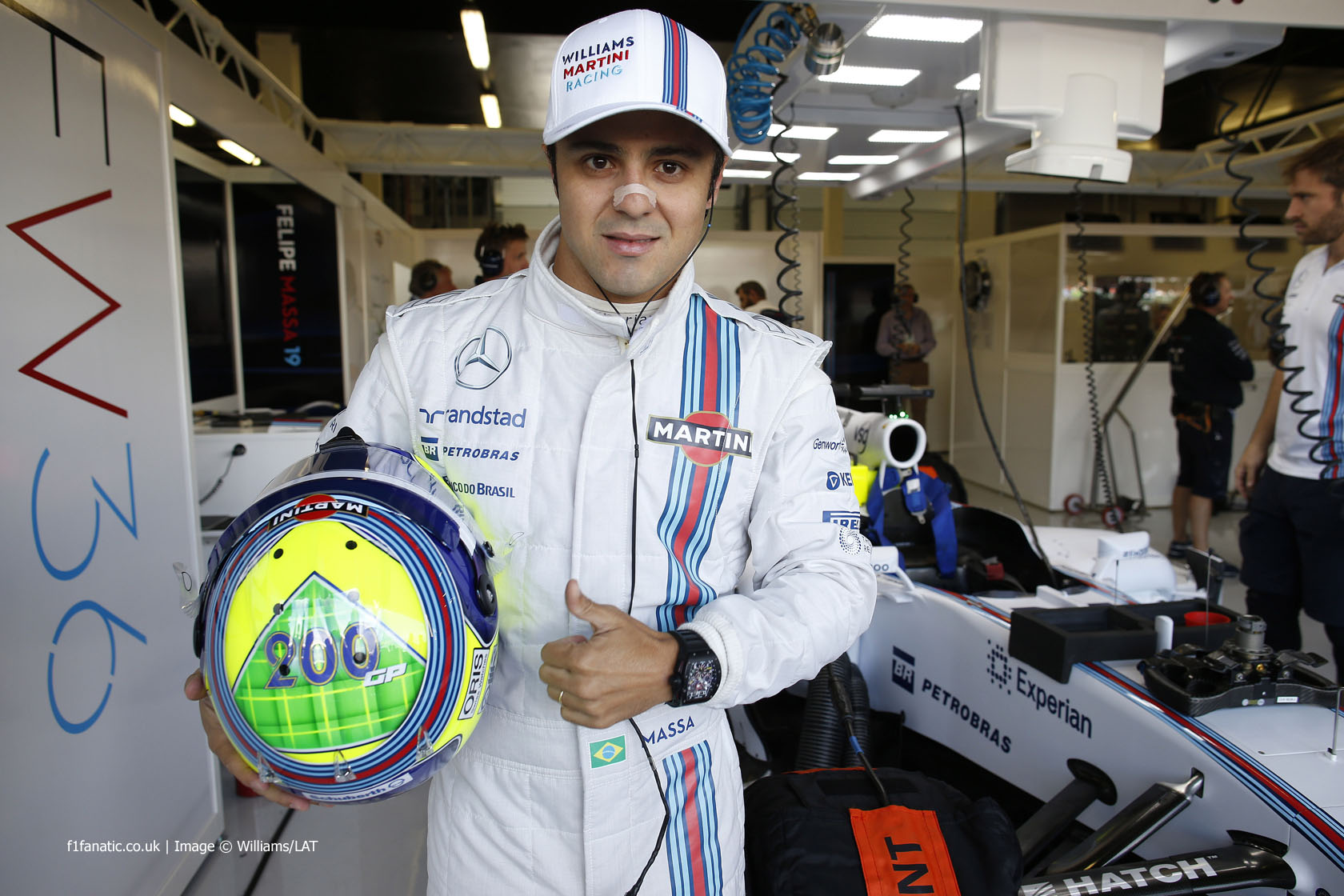 A wet Saturday at Silverstone meant pain for Ferrari and Williams in Q1 but left Marussia celebrating.

After the action had finished Williams held a party to mark Felipe Massa’s 200th grand prix start in tomorrow’s race.

Here’s more from the track and paddock on Twitter.

Historic F1 cars now circulating at Silverstone, including Alain Prost in a not quite so historic Red Bull

Changing conditions in Q1 caught out Williams and Ferrari, while Marussia took advantage of the rain for their best qualifying result to date.

#FerrariGBRGP The rain has restarted, both Scuderia Ferrari drivers out in Q1. What a disappointment!

Vettel had his best time deleted for running wide – the stewards being firm and consistent – 'zero tolerance' as promised. #F1

The fastest Ferrari-engined car in qualifying was the @Marussia_F1Team of @Jules_Bianchi. Doesn't happen every day :)

Didn't see that coming, great end to Q3! Mercs P1 and P6, and we oh-so nearly had a Force India and McLaren on the front row #F1

So pleased for Jenson Button – qualifying in third at a race that he's dedicating to his late father. All the best for tomorrow JB. #F1

Brilliant Quali @McLarenF1! And that's why am out in the rain supporting! #AlwaysBelieveInMcLaren #BritishGP 🇬🇧👚 pic.twitter.com/DDvcpZ75Pk

I made a mistake today, a bad call that decided my qualifying. I'm so sorry to all the amazing fans! I'll push all the way for them tomorrow

Button admits an "emotional" slowing down lap, given all pink in grandstands for John.Also says he and Ron talked since "try harder" comment

Chaotic and unfortunate qualy for us today. Positions 19 and 20 give us a chance tomorrow to risk with nothing to lose! Max push!!

Tough day but the race is tomorrow. Still possible to get good points tomorrow from P15 with the car we have! @WilliamsRacing #BritishGP #77

'@nico_rosberg said he recalled Michael Jordan saying 'You miss 100% of the shots you don't take', a message he relayed to the team

disappointed they put us back to 7th in the last lap! Tomorrow I'm confident we will recover !!!! I'm looking forward to a good race

Celebrations at Williams as Massa prepares to reach 200 races since making his debut in Formula One in 2002.

Thank you to all the drivers, teams & friends who came to celebrate-great to see so many familiar faces! #FM200 pic.twitter.com/33FIXYWMKl

Among those to turn up to support @MassaFelipe19 at his 200th bash were VET, RAI, BUT, RIC, SUT, BOT, BIA and MAL

#Kimi last man standing at the autograph session – stayed 'til everyone had their autograph #nIceMan #BritishGP #F1 pic.twitter.com/EqvkXymOr7

What a grid for British GP. Williams +Ferrari massively out of position, as is Lewis to an extent. Should be lot of fun, may rain too #SkyF1