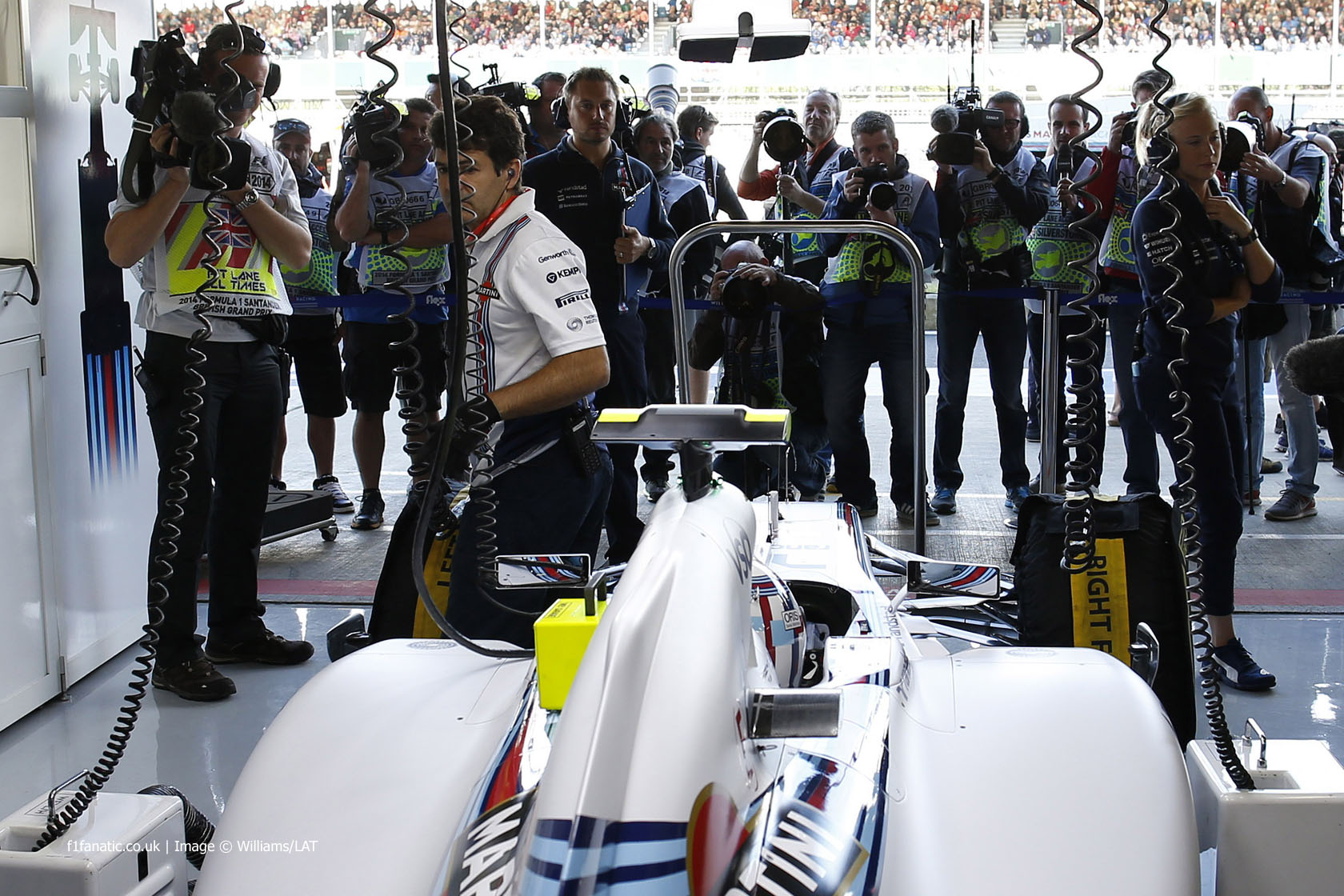 Susie Wolff’s practice debut was the main talking point of Friday at Silverstone, as she became the first female driver to take part in an official Formula One weekend since 1992.

Mercedes marked the 60th anniversary of their first F1 victory in surprising fashion.

At @WilliamsRacing, @Susie_Wolff waits to go out. Note she's wearing a @mariavillota star on her helmet. #F1 pic.twitter.com/bRX82jurHe

Wolff’s day did not go to plan as her running ended after merely a few laps.

Suzie Wolffs car has stopped. Must be gutted :( pic.twitter.com/SNYryQvBzb

Both Williams cars were out of practice as Felipe Massa crashed soon thereafter.

Huge crash for Massa in the distance pic.twitter.com/ASquPQmyJb

Massa taking liberties with the astroturf there – result is a big shunt. Always hard to have sympathy when drivers abuse track limits #F1

To celebrate the occasion of our home grand prix we're making sure everyone gets a mention. Come on Team! #BritishGP pic.twitter.com/EcDKn3MO7c

Ericsson was told to let the rpm drop before trying to move. Then engine temperature rose and he was told to get out pic.twitter.com/dlAVR0McqA

At Silverstone and, have to say, quietly enjoying the new sound of F1!!

Ricciardo is concerned "we're going to hurt the gearbox" on his Red Bull and returns to the pits. #F1

Daniel Juncadella was happy with his first opportunity in a practice session. He was in Nico Hulkenberg’s car in the morning.

Amazing stuff on track. British Greats of #F1 in a variety of classic and majorly retro #F1 cars. A Motorsport enthusiasts dream! Epic.

My view for FP2. Wellington straight just prior to Brooklands. #BritishGP pic.twitter.com/8kA99FCfCk

Felipe thanks the guys for their hard work on the radio before heading out- really was an impressive turnaround #FP2 pic.twitter.com/KfRcpVLXNW

Seriously hairy moment for Kvyat who almost Massa-ed it into the barrier at Stowe. #F1 pic.twitter.com/FzfFRI4ZyC

Toto Wolff admits that Mercedes let down @Susie_Wolff in FP1: "Let's see how she's going to penalise me…"

Bit of unlucky FP1. Electronic problem. Still drove 10 laps thanks to the hard work of the team! There was still a lot to come :). #F1

An amazing photo of Susie Wolff after her early exit from #FP1 – a picture tells a thousand words they say… pic.twitter.com/LQHUxiRreq

Newey mentions in FIA presser that all cars have Torque Sensors. But what the sport really needs is some Sense Talkers.

The moment social media updates lack authenticity, mistakes & all, the fan base realises it is being sold a line. Lacks credibility. #F1

.@Susie_Wolff A huge thank you to all the support. When I step in the car, there is something to learn, so there are a few positives today

Pretty fun day out on track today. Love it round here. Hopefully squeeze some more outta it tomorrow, feeling pretty hooked up though ✊

Plenty of work to do with the car. There is room for improvements. And we shall see what the British weather will do tomorrow 😉 #BritishGP