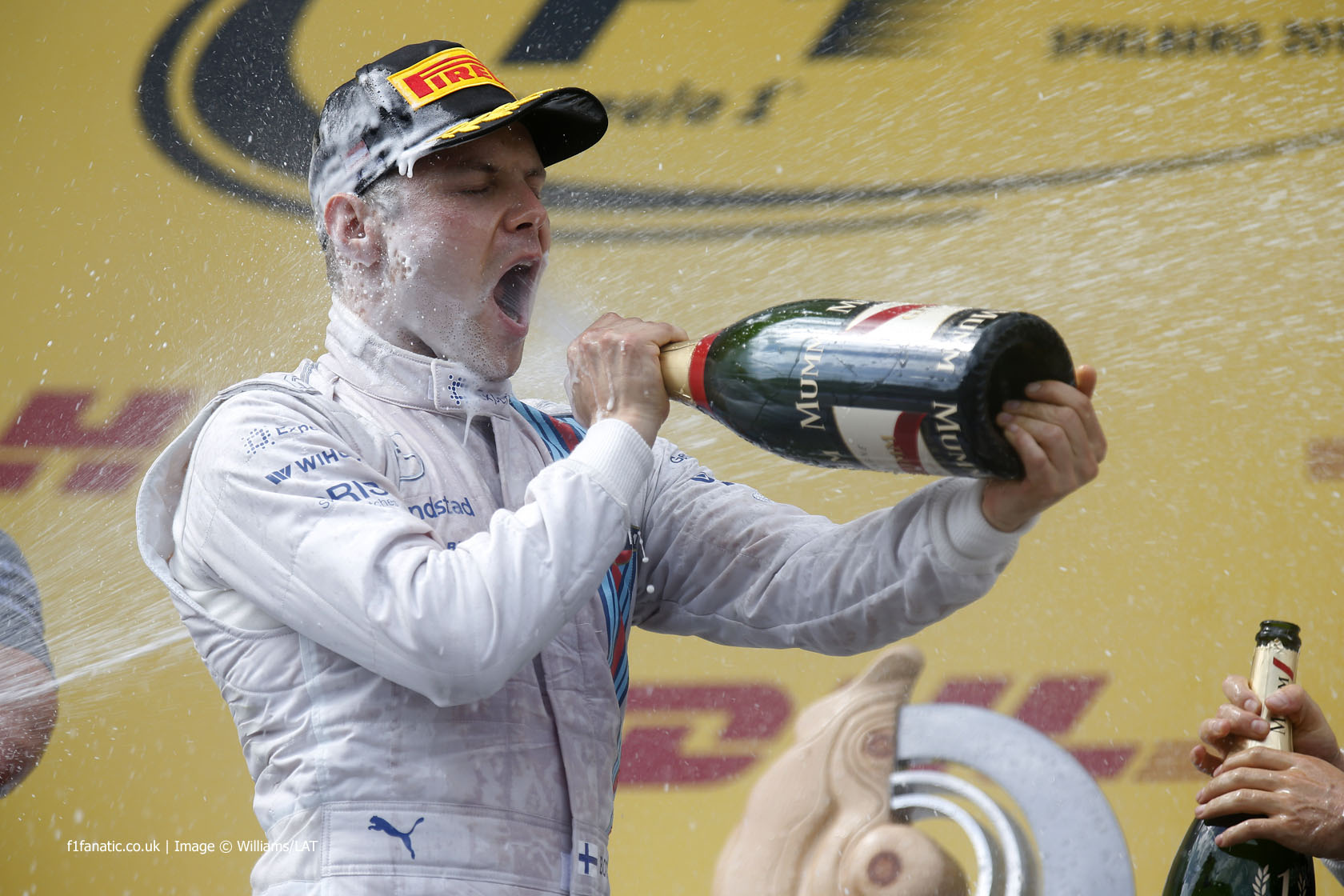 Valtteri Bottas has been voted as the Driver of the Weekend for the Austrian Grand Prix following his first ever front row start and podium finish.

Bottas received 41.7% of the vote – the lowest of any winner so far this season – to top the poll ahead of Lewis Hamilton. The Mercedes driver climbed from ninth to second and took 15.1% of the cote.

For the second race in a row Sergio Perez took third place in the vote. Like Hamilton he also made an impressive climb through the field, gaining ten places to finish sixth.

However despite taking his third win of the year Nico Rosberg remains yet to win a Driver of the Weekend poll this season. He earned 8.9% of the vote in Austria.

Williams looked strong all weekend and when Mercedes faltered in Q3 it looked set to be a battle for pole between Bottas and team mate Felipe Massa. Ultimately a small mistake from Bottas handed Massa the pole position, but nonetheless he lined up on the front row for the first time in his F1 career.

Nico Rosberg demoted him a place off the line but a brilliant exit from turn one allowed Bottas to reclaim the place before the cars reached turn two. Despite stopping a lap after his team mate a quick stop enabled Bottas to emerge ahead of Massa – but behind Rosberg, who’d jumped the pair of them.

Bottas took the fight to Rosberg when the Mercedes driver made a mistake in the middle of the race, but couldn’t make his way past the Mercedes and was ultimately jumped by the other car of Lewis Hamilton as a result of Williams’ cautious strategy. Third place was his first visit to the F1 podium, and his pace at the end showed Williams could have been more aggressive.

Brilliant qualifying, just missed out on pole because of his experienced team mate. Did not let things hang coming race day, defending from Rosberg into turn one, and taking back second in turn two. Had very good pace to keep Hamilton behind in his second stint and managed to finish well ahead of Massa. In the last few laps he was even the fastest car on track.
PorscheF1 (@Xtwl)

Second on the grid, third in the race, super job. He was on it all weekend and only a small mistake in Q3 kept him off of pole, though that is not enough to take this award from him in my book.
@GeeMac

Qualifying was again the weakness in Hamilton’s weekend. Four tenths up by the second sector on his first run in Q3, he threw it away with a mistake in the penultimte corner, and compounded his error by spinning again on his final run.

But he regained much of the lost ground with a brilliant first lap. Having moved up from ninth to fifth a move on Fernando Alonso at the penultimate corner put the Mercedes driver into fourth as lap two began.

It was then a case of waiting for the pit-stops to pan out and following his second stop he slotted into second place behind team mate Rosberg. Hamilton then set about challenging Rosberg, but never got close enough have a real attack.

Yet despite taking 15% of the votes, few people left comments to explain why they had picked Hamilton as Driver of the Weekend, and several disagreed with the choice.

Gave it to Hamilton here. I just can’t ignore Hamilton fantastic first lap gains. Additionally, his reactivity when the situation called for it was really impressive.
Paul (@Frankjaeger)

Out of the Mercedes drivers both made mistakes in qualifying but Hamilton made the bigger mistakes on Saturday, on race performance Hamilton was probably the better of the two but not by enough that would give him the edge over Rosberg for the whole weekend.
@PJA

As a consequence of his last-lap collision with Massa in Canada, Perez arrived in Austria with a five-place grid penalty hanging over his head. The team tried to get the penalty overturned but were unsuccessful and Perez started 15th.

Starting on the contra strategy Perez hit the front when the leaders pitted and stayed there until Rosberg attacked, having been told not to waste time defending. A final stint on the Super Soft tyres allowed him to ease past Kevin Magnussen for sixth but Alonso was too far up the road.

Has to be Perez for me. He totally bounced back from a crash which cost him and his team dear points and fifteenth to sixth has to win it for me.
Duncan Brokensha (@Broke84)