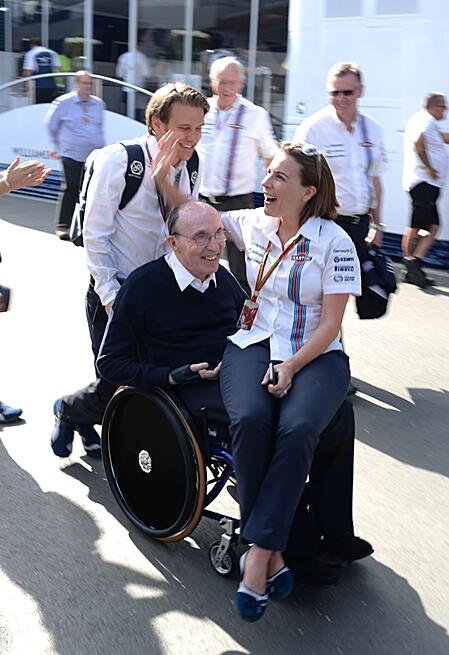 A warm welcome from the Austrian fans and a podium finish for one of F1’s best-loved teams gave the Austrian Grand Prix a feel-good factor.

@byronf1 Did you respond by telling him that fans do not want double points, yet teams are not listening?

Niki is showing us now how to drive the track!! #legend #Champ pic.twitter.com/uRyLi9LkG7

Sad to hear of the death of @autosport legend Jim Bamber – ace cartoonist who always helped us laugh at ourselves. pic.twitter.com/GoxwvIO60M

View from the front row of the grid, which Williams earned in qualifying.

Good view of the lights! pic.twitter.com/0ghDbvqqIn

Mercedes were confident and Lewis has absolutely nailed the first lap. He's fourth and already on the back of his team-mate #AustrianGP

A power unit problem meant Sebastian Vettel dropped to the back of the field in the early stages of the race – not for the first time this year.

What a miserable season Vettel is having. #F1

A quick stop by the Williams pit crew, the fastest of the day, allowed Valtteri Bottas to rejoin the race ahead of Lewis Hamilton and his team mate.

That was an impressive pitstop for @ValtteriBottas well done boys! pic.twitter.com/nA0WeFncsC

After a big shunt in Canada, Felipe Massa and Sergio Perez did not collide this time around.

Smoke comes of Gutierrez's tyre and a few elements come off Vettel's wing as the pair make contact. #F1 pic.twitter.com/jhWgCFP3Ai

I'd forgotten how beautiful the A1 Ring was….

As well as Vettel, both Toro Rossos failed to finish the race.

Three retirements at the Red Bull Ring so far and they all have 'Red Bull' written on the side. Only Ricciardo left. #F1

Today's trophies, in case you missed them… pic.twitter.com/4PLTSOMesF

I feel sorry for Bottas. His first F1 podium and he gets a giant pizza cutter.

Vital to remember that although Lewis Hamilton is 29 points behind Nico Rosberg, that's less than the points for 3rd place in Abu Dhabi

That was an amazing weekend for us. I have to thank the team for a great car and a perfect strategy! @MercedesAMGF1 pic.twitter.com/4ytbC0UisR

The man is good for his word. @ValtteriBottas promised Claire to wear lederhosen if he was on the podium. #AustrianGP pic.twitter.com/7Qou2kZHxg

Tough day in the office but we will bounce back as @Lotus_F1Team has always done! Course compliquée mais nous allons rebondir ! #AustrianGP

So proud to be Austrian. We really rocked today. What an amazing weekend this was ! #Spielberg #F1 #AustrianGP pic.twitter.com/fAFlmjjmk3

.@MassaFelipe19 We had a good fight with the Mercedes but it was clear we were never going to win. It was a positive weekend for the team

Some great drives today, @SChecoPerez is a candidate for drive of the race after huge Montreal crash, 5 place grid penalty & recovery drive

A decent race after a difficult weekend. Pace wasn't bad and we were closer to the guys in front. Looking forward to silverstone! #ME9 #F1

Top, top weekend at the #AustrianGP and #RedBullRing. Excellent location, superb facilities, a full house of knowledgeable fans. This is F1!

Nonsense like this (via @f1broadcasting), like the endless stupid rules changes, shows how #F1 has lost the plot. pic.twitter.com/OamrcSUKwb

The man is good for his word. @ValtteriBottas promised Claire to wear lederhosen if he was on the podium. #AustrianGP pic.twitter.com/7Qou2kZHxg

I think this pict by @miquelliso reflects a feeling shared by all paddock and fans alike pic.twitter.com/6dAY9kWsID @WilliamsRacing

Something alt, something neu: Gasthaus wall art at the #AustrianGP pic.twitter.com/mMdPrvhXwS

Wow what a feeling to get on that podium for the first time.. Thank you all for the support and thank you @WilliamsRacing! #willkeeppushing

It had to be done….. #Austria pic.twitter.com/IB29XzJvBw