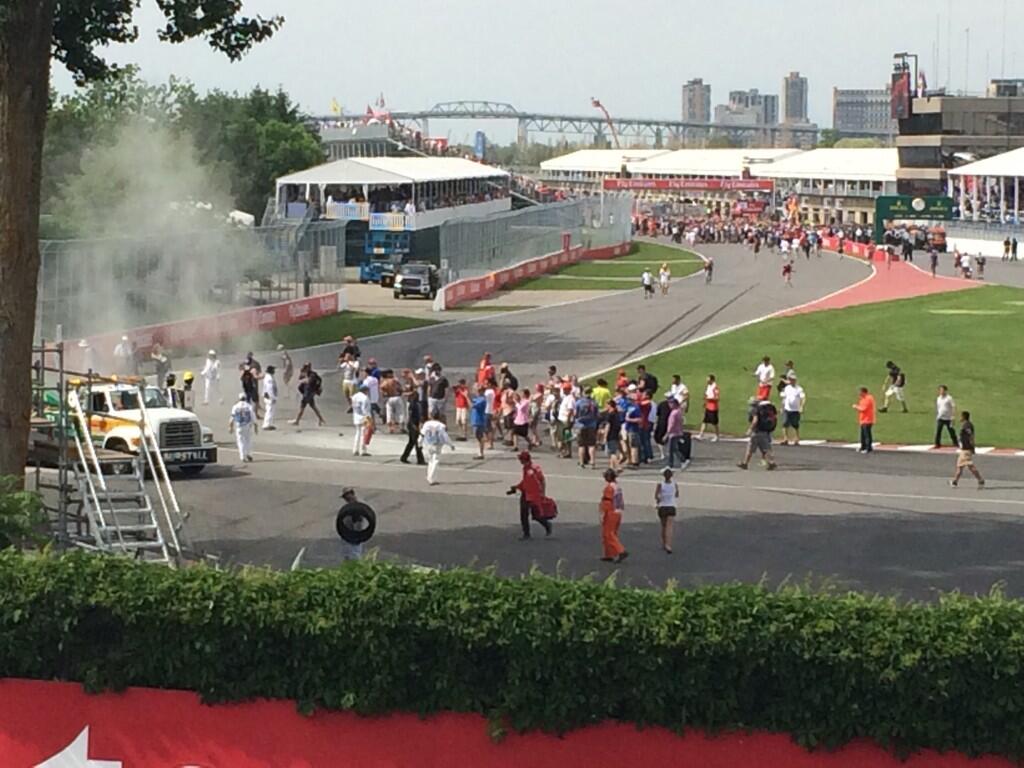 The Canadian Grand Prix came to a thrilling conclusion: Daniel Ricciardo clinched his first grand prix win, and on the final lap Felipe Massa and Sergio Perez crashed heavily, fortunately without injury to either driver.

But the circuit’s handling of the crowd at the end of the race was called into question. Twelve months on from an accident which claimed the life of marshal Mark Robinson, there were concerns that fans had been allowed onto the circuit while recovery vehicles were being operated.

And while some spectators tried to get their hands on pieces of debris from the crash, marshals discharged fire extinguishers to keep them at bay.

But most of the attention was on Ricciardo following his remarkable maiden Formula One victory. Here’s how the chaotic Canadian Grand Prix happened on Twitter.

Will the Canadian organisers do a full tribute to Al Pease before the start of the GP? Parade of all of Al's cars would be appropriate.

With half an hour to the race, we'd like to pause for a moment to remember Mark Robinson, the marshal who lost his life here last year. #F1

Marussia were full of optimism from their Monaco Grand Prix success as they sent their cars to the grid. Unfortunately they wouldn’t get much further than that.

The drivers have left the garage. pic.twitter.com/BbWlnAxxYm

Start of the race

Bianchi's wrecked Marussia after being put into the wall by Chilton.#F1 pic.twitter.com/FUKZKpCtUR

The moment Rosberg nearly stuffed his Mercedes into the turn four wall on his out-lap. #F1 pic.twitter.com/3QNBzC6LCE

L28 Battle rejoined at the front after Rosberg went off. The pair are separated by half a second. #F1

L34 Yes, Hamilton is out of DRS range now. Rosberg has weathered the storm. #F1

Lewis: "I've lost my power". His lap times have fallen away. Gap about 2 seconds. Seems like Nico might be having a similar problem

Major drama now as both Mercedes are slowing badly. It's looking good for Force India! #F1

After pitstop @danielricciardo comes out ahead of #Vettel @MercedesAMGF1 pic.twitter.com/TgvTx0IUuv

Hamilton slows and he's passed by his pursuers, his race is over, but will the same happen toRosberg? #F1

Looks like a crippled Merc has the same performance as a perfectly functioning FI or RBR. Can't believe ROS can hold on to this lead #F1

Awesome pass by Ricciardo! Put two wheels on the grass but made it stick for second. Four laps for him to catch Rosberg. #F1

Ricciardo has the lead with two laps to go! Absolutely sensational.

NOOOOOOO! Massa smashes into the back of Checo's car!

Safety Car out so Daniel Ricciardo will win the Canadian Grand Prix! #F1

Massive win for you @danielricciardo well done for your first win

A big crash between Sergio Perez and Felipe Massa was a cause for concern. Fortunately, both were alright.

Both of those were potentially concussive hits. Lots of rotational energy too. Both Sergio and Felipe will have to be looked at carefully

Especially given both their histories of head injuries – Sergio concussed severely at Monaco and of course Felipe in Hungary.

Massive result for Rosberg too, given the circumstances. A big day in the #F1 title fight?

Ricciardo was congratulated on his first win by the man he replaced at Red Bull, his countryman Mark Webber.

Bloody fantastic @danielricciardo GP winner get in there!!! 1st of many…. 👍

Word is that Marshalls are having to spray the crowd with fire hoses to keep them away from the Massa/Perez debris. Seriously?

Daniel "Still a bit surreal" Ricciardo says he delayed his victory celebrations until he heard last-lap crashers Massa and Perez were OK.

Vettel did incredibly well to avoid hitting @MassaFelipe19 on the last lap: https://t.co/C7mVOJRwNY (via @OfficialMinis) #F1

Wow!!! Proper race track, proper racing. Not too many corners, big kerbs and no run off except where necessary. Were you watching Mr Tilke??

So @danielricciardo is going to be led astray and not fly home tonight…think @JensonButton wants to ruin him in Montreal! Poor guy ;) #F1

As usual crowd was really getting into it. Lot of support for HAM when he was chasing, but even more for RIC when he took the lead

Rosberg too was awesome. Had to fix his ERS & brake issues using dials & buttons he "didn't know existed." While racing at 300kph+

And I'll tell you one thing to the engine noise naysayers. I never got chills from a V8 the way I do from hearing 100,000 fans cheering.

Hope you all enjoyed that race as much as I did. Wild, intriguing, surprising, scary, unpredictable, thrilling. Impressive performances :))

The impact of @SChecoPerez was enough to pull the conveyor-belted tyre wall completely out of it's mounting point pic.twitter.com/Uew1P0nu1T

Gracias a todos ! Estamos bien , Dios es grande .. Thanks to everyone I'm very well ! Thanks

It's anarchy. Scavengers are being sent away by marshals shooting fire extinguishers. pic.twitter.com/3YbTySklBR

In all seriousness, this is really dangerous. Track vehicles moving around while spectators run everywhere. pic.twitter.com/Sc9cddf8Xk

We lost a marshal here a year ago. This isn't right. #F1

The fence should never have been opened while Felipe & Sergio's cars were on track. #F1

Excitement in this race all the way! Glad to know that @SChecoPerez and @MassaFelipe19 are okay after the incident! Thanks for the support!

Big congrats to @danielricciardo on his 1st win in F1! Well deserved! #specialMoment

Shite, Raikkonen is right on my tail pic.twitter.com/pqP0VrVnXc

What a head!!! Haha yeewwwwwww!!!! Ok I officially can't smile any bigger than that so you've seen it all now 😝😝😝😝😝 pic.twitter.com/4TQxJC3ZDr