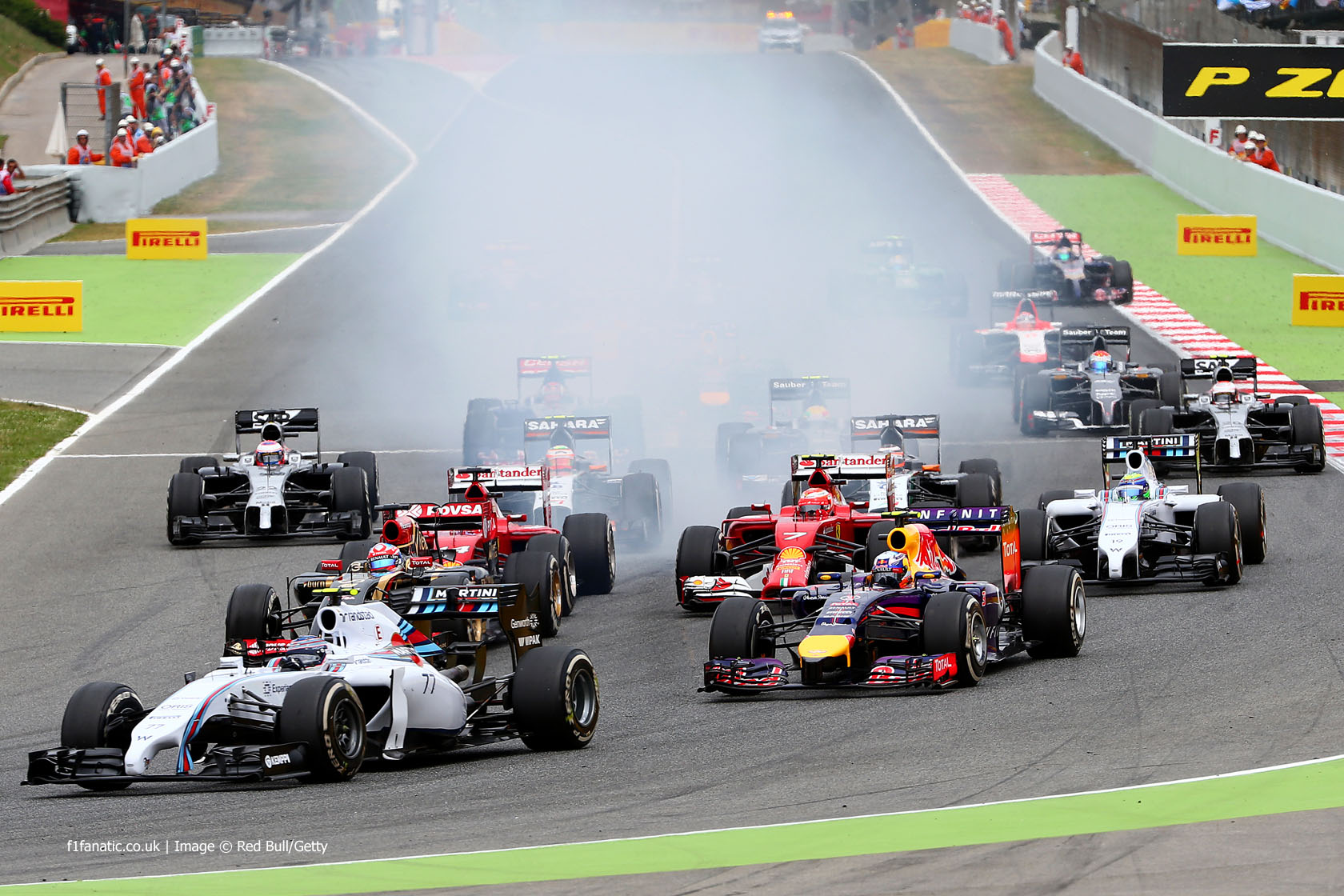 This year’s Spanish Grand Prix was a slow burner where contrasting strategies produced several contests for position in the final laps – including a tense duel for the lead between the Mercedes drivers.

Despite pressure from his team mate, Lewis Hamilton took the win, his fourth in as many races, and with it claimed the lead in the drivers’ championship.

With Sebastian Vettel, Fernando Alonso and the Force India drivers adding to the action during the final stint, F1 Fanatic readers gave the Spanish Grand Prix an average rating of 6.4 out of ten, putting it third of the five races so far.

The scores for the last seven Spanish Grands Prix support the view that the changes made to improve the racing – the introduction of rapidly degrading Pirelli tyres and the Drag Reduction System – have played a significant role at the Circuit de Catalunya, which has always been a difficult track to pass on.

The rate the race results for Spain have been higher since 2011: the average score for the three preceding races 5.111, which has risen to 6.997 since.

Here’s a selection of your views on this year’s Spanish Grand Prix.

‘Not bad for this track’

Many of you were realistic and focused on the positives when scoring the race, based on the track it would maybe be a little unfair to expect wheel to wheel racing in every corner.

As usual for a Spanish Grand Prix, it was quite a technical and somewhat boring race. Mixed strategies and some decisions gave us some exciting last laps. It wasn’t easy to watch and there wasn’t any particular drama to remember from this race. Quite average and will be forgotten soon.

I’ve got to say, though that this year F1 is more balanced than previous years. Not as per team performance, where Mercedes is well ahead, but the tyres are not drawing attention away from the race, the DRS is not overpowering and there are not so many mechanical failures as we feared before the season.
@Dimitris-1395

I gave it a seven. The early part of the race wasn’t that good and I thought it would be a typical Spanish Grand Prix, in other words quite boring. However Vettel and Alonso three stopping and charging the field added enough excitement later in the race. When Rosberg was chasing down Hamilton in the final stint I was on the edge of my seat wondering which way it would turn out, and I thought it would be in Rosberg’s favour. So overall a decent race.
@Pja

I’m here to rate how much I enjoyed this race and due to some very tense inter-team battles, and a storming drive from Vettel.

A slow-burner that turned into one of the better Spanish Grands Prix.
@Racectrl

There were some negative comments about some of the television director’s choices in Spain. Monaco is one of the few Grand Prix that has their own director, so we will see how he fares next race.

Yeah exactly when Rosberg is lining up for a pass, let’s show his girlfriend. Stupid thinking!
@Hamilfan

The race fails to win over some

Not everyone enjoyed the race. The main reasons being lack of overtaking, pitting for position and drivers often backing off.

I thought it was boring. Only the last few laps we saw actual overtaking, the rest was basically pit-stop overtakes. Fun to watch for strategists, but not me. I want to see on-track action and we didn’t get any today. Monaco will most likely be the same, however it could get interesting if Vettel or Ricciardo snatch pole.
@Rigi

Boring from start to finish and very predictable.

How can this even be called racing? Calling it a race is an insult to racing!

I was watching Ricciardo coming up on Bottas, then his team tells him to drop back to a two second gap to save the tyres! That is not a race.

The whole point of a race is to push yourself to finish first. Isn’t far more effective to get up right behind the next driver and harass him until he makes a mistake? They should be giving these guys tires that allow them to actually do that.

To me, the only reason a driver should have to stop and change tyres is because he was pushing the car to the brink of exploding. The points are only given to the top ten drivers, so then they should push as hard as they can to get into the top ten. I would rather my driver push his car to until it dies on him then finish outside of the points.
@Irejag

On a whole, most readers were positive and sometimes defensive about the race and Formula One in general.

‘The overtake’ is not the be all and end all of F1. F1 is a much richer, deeper and more technical sport than possibly any other. It is why I love it. When there’s a (non-DRS) highly accomplished pass, it’s thrilling, exciting and indeed awe-inspiring.

There may be fewer of them in F1 than other motorsport simply because the margins are so fantastically small and the drivers of such a high standard that genuine passing (non-assisted) is rare. It is this rarity that makes it special.

If you have several passes per lap it’s no longer a highlight. They wouldn’t be hard fought over many laps. Passing would no longer be special.
@Psynrg

This is good F1. It really is. Great strategy and build-up, wonderful performances, a fight for the lead, tension, information.

I’ve karted quite a lot, enough to know that not every race is exceptional, and not every race has to be. There were some great races, and others where it was pretty boring, long distance behind and in front of some one. That’s motorsport, and that’s okay. You must love the sport in all its details, not just in a “why isn’t there more overtaking”… that’s just a part, a nice part, but a part nonetheless.

Let’s not try to make this a show people want to watch. Either you love the sport and discuss it on that level, or just go watch something else. Sorry, but it irritates me when people complain about things that are actually part of the sport, and always have been, like strategy. It is not about racing as fast as you can the whole time for 300-plus kilometres, it is about using your brain, and maximising your options.

This was so fascinating about Hamilton, Rosberg, Bottas and Vettel today – they were able to maximise their potential in the different racing situations, and that’s what I like to see. I don’t expect it to be thrilling from start to finish until the end, because I know from own experience that that is not realistic in racing; but it is still fun every time!
@Magon4