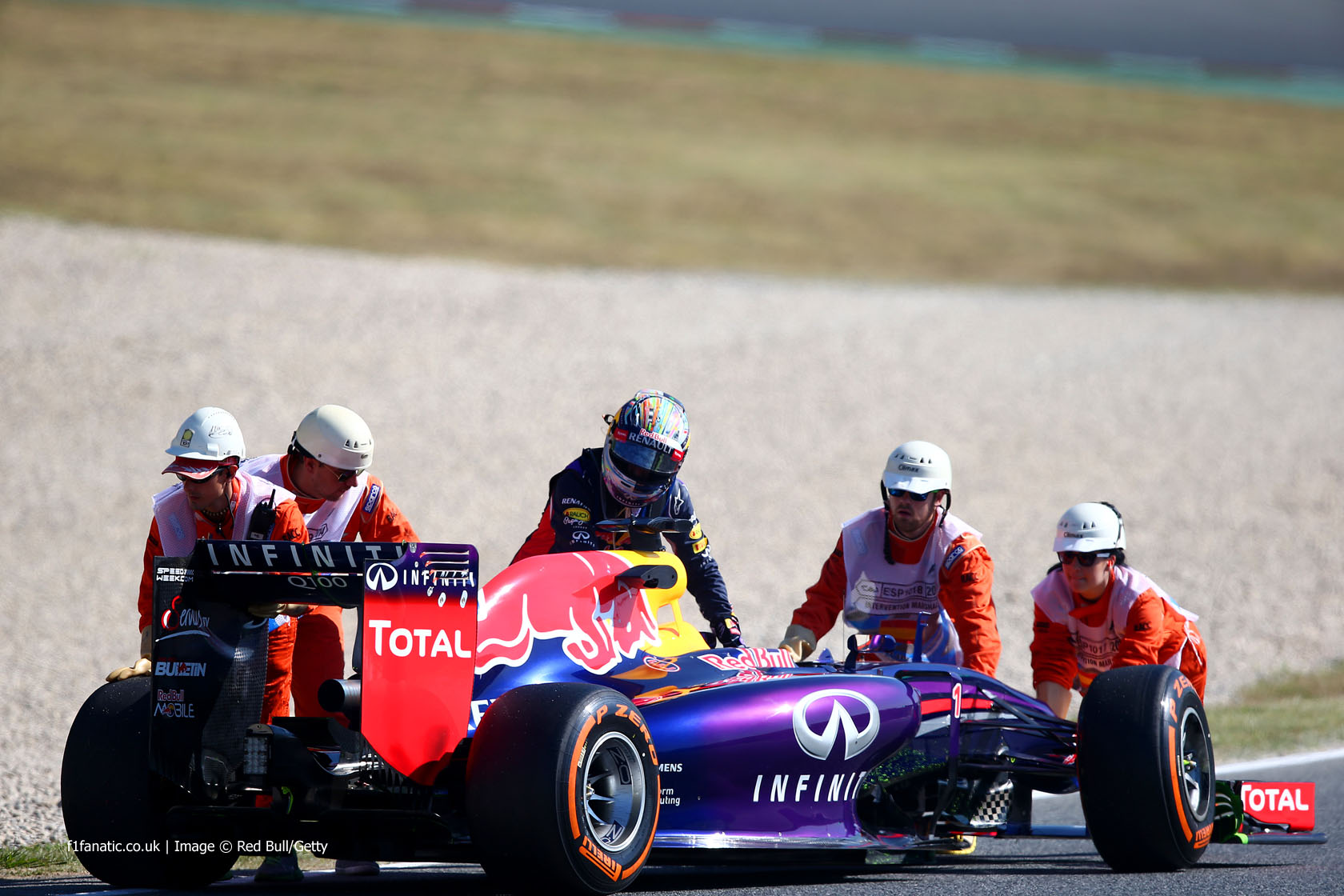 Ten of the best pictures which tell the story of the Spanish Grand Prix weekend. One year to the race since his last victory, Fernando Alonso could only manage sixth in his home grand prix. The liberal coating of flow-vis paint on the front left of the Ferrari F14 T reveals one of their development priorities during practice. Williams had their most convincing showing so far this season courtesy of Valtteri Bottas, who qualified fourth and came home fifth behind the Mercedes and Red Bull pair. He had to sit out the first practice session too while Felipe Nasr had another run in the FW36. Jean-Eric Vergne must be one of the most persistently unlucky drivers of recent years. In practice a wheel came off his Toro Rosso, earning him a ten-place grid penalty, and in the race he posted his third retirement due to a technical problem in five races. Sebastian Vettel had more than his share of problems as well, starting with this breakdown just four laps into first practice. A wiring loom fault left him in the garage for the rest of Friday.

On Saturday his gearbox broke during Q3, and the consequent penalty for changing it left him down in 15th. Yet at a track where overtaking has previously been very difficult, he made his way up to fourth at the chequered flag. On the morning of the Spanish Grand Prix, 123 days after Michael Schumacher was seriously injured in a skiing accident, Ferrari remembered their former driver who remains in a coma in hospital in Grenoble. Schumacher’s first win for Ferrari was achieved at the Circuit de Catalunya in 1996. Second-placed Nico Rosberg headed off in pursuit of Lewis Hamilton at the start. Meanwhile the field had their last look at the two Mercedes cars – until they came around to lap them, that is. Sauber arrived in Spain with a lighter version of their C33 but any effect it had on their competitiveness was only temporary. Esteban Gutierrez qualified 13th and made up two places at the start.

But he could only hold off Daniil Kvyat, Jenson Button and Sebastian Vettel for eight laps before they all passed him. By the end of the race Gutierrez was 20 second behind the rest of the midfield runners, with only his team mate, the Marussias and Ericsson’s Caterham behind him. Rosberg kept the pressure on Hamilton and by the final lap there was little more than half a second between them. But Hamilton held on and took the lead in the championship away from his team mate. It was a lonely race for Daniel Ricciardo after he jumped ahead of Bottas early in proceedings. But after his disappointment at home in Australia he finally claimed his first official podium finish. The two Mercedes drivers toast another satisfying contest between the pair of them, though Rosberg must be wondering what he has to do to beat his team mate.