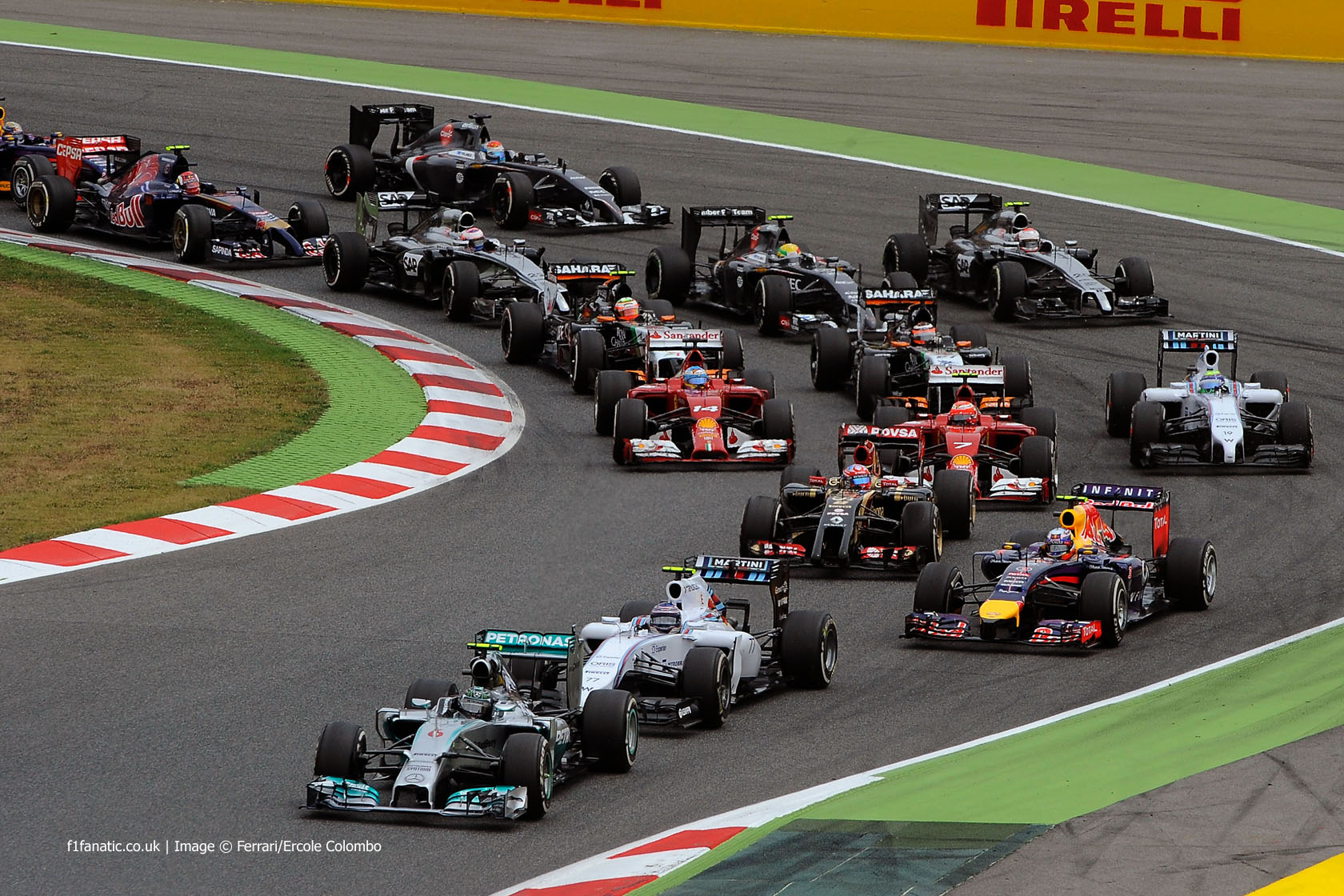 Which F1 driver was the best performer during the Spanish Grand Prix weekend? Sebastian Vettel – Having switched chassis for the weekend in the hope it might help cure his handling problems with the RB10, Vettel’s race build-up was marred by problems. He stopped after four laps in first practice and missed the rest of the day’s running as the team replaced his wiring loom. Then his gearbox failed in Q3, leaving him 15th on the grid. To recover from there to finish fourth behind his team mate, aided by a three-stop strategy and some bold passes, is the best he could have hoped for.

Daniel Ricciardo – Looked right on it in qualifying and it would have been fascinating to see how he stacked up against an unhindered Vettel. The only blot on his performance was an indifferent start where he was passed by Bottas and nearly Grosjean as well. An early first pit stop allowed him to jump the Williams – though he came close to making a move stick on-track – and after that he had plenty of free space to nurse his tyres through a couple of longer stints. Nico Rosberg – Missed some running in first practice due to a problem with his energy recovery system but looked to be on course for pole position when he headed the times in Q1 and Q2. Hamilton beat him to it, though, and as he didn’t get off the line well he was on the back foot once again. As in Bahrain he showed he had the pace to take the fight to his team mate, and was poised to launch an attack when the chequered flag came down.

Lewis Hamilton – Having described Friday’s running as his best for a very long time, Hamilton seemed to lose his way initially on Saturday. But he got it together in time to take his fourth pole position of the year. Nonetheless his handling maladies returned during the race – he struggled with oversteer on his middle stint on medium tyres and Rosberg continued to catch him over the final laps. But he hung on to take win number four and the championship lead.

Fernando Alonso – Out-qualified by Raikkonen in a straight fight for the first time this year (he had a problem with his car in Bahrain) but looked quicker than his team mate from the moment the race began. Probably should have jumped ahead when he got the benefit of the first pit stop, but used a switch to a three-stop strategy to his advantage and made a move on-track with newer tyres late in the race.

Kimi Raikkonen – While Alonso was brought in on lap 17 and switched to a three-stop strategy to cover what Vettel was doing, Raikkonen was not and ended up being passed by his team mate. “Going for a two stop strategy proved to be the wrong choice because tyre degradation meant I couldn’t push all the way to the end,” he said. Romain Grosjean – Had various problems with his car during practice but produced the goods in qualifying to put his Lotus an excellent fifth on the grid. He held that place until a problem with his power unit left him unable to keep the Ferraris behind on the straight. But eighth place meant he brought home Lotus’s first points of the year.

Pastor Maldonado – For the second weekend in a row Grosjean reached Q3 while Maldonado was eliminated in Q1: He spun into a wall just minutes after the session had begun. His race didn’t get off to a better start – he hit Ericsson on lap one, earning a stop-go penalty and licence endorsement. After falling to last place he came home ahead of the Saubers, but was passed by Kvyat after running a long final stint. Jenson Button – Took eighth on the grid and suspected there was only a little more time to be found in the McLaren. However a poor start – losing five places – left him with much to do. The timing of his second pit stop compounded his problems as he was held in his box while Kvyat went by, and then came out a lap down behind Hamilton’s Mercedes which was on old tyres. That left Button behind the Force Indias and out of the points.

Kevin Magnussen – A problem with his power unit in Q2 meant Magnussen was unable to set a time, leaving him 14th on the grid. He managed to avoid clipping Vettel and damaging his front wing on the first lap, but like his team mate couldn’t make any impression on the points places.

Nico Hulkenberg – Missed a place in Q3 by less than a tenth of a second but said his lap was “very good”. Ran ninth for much of the race but was demoted by his team mate during the final stint.

Sergio Perez – Aborted his final flying lap in Q2 because he hadn’t got his tyres up to temperature in traffic, which left him one place behind Hulkenberg on the grid. Both Force Indias ran long final stints – Hulkenberg 29 laps on hards, Perez 28 on mediums – and on lap 50 Perez got by his team mate on the outside of turn one. Adrian Sutil – Having been content with his car on Friday he couldn’t get on top of the tyre temperatures on Saturday and was knocked out in Q1 for the third time. Despite having shed weight from their car Sauber continue to languish at the back of the midfield: “We still have a huge problem with the grip level,” reckoned Sutil.

Esteban Gutierrez – Qualified 14th and felt there wasn’t any more in the car. A good start moved up up to 11th but the car plainly wasn’t capable of holding that position and he was demoted by Kvyat, Button and Vettel. But he grafted away on his three-stop strategy and at least had the satisfaction of passing Sutil on the final lap.

Jean-Eric Vergne – A wheel came off his car during practice, earning him an automatic ten-place grid penalty. Therefore Vergne elected not to set a time after reaching Q2. But his fortune did not change on Sunday: The team were aware of an exhaust problem on his car before the race started, and it proved terminal.

Daniil Kvyat – Tyre degradation forced him onto a three-stopper. He passed two cars in his final stint to finish 14th and was reeling in Massa and the McLarens at the end. Felipe Massa – Admitted he made a mistake at turn ten on his final flying lap, losing the rear of his car, which left him five places behind his team mate. The race didn’t go much better – he seldom managed to break out of traffic on his three-stopper and couldn’t make a move on the McLaren drivers.

Valtteri Bottas – Didn’t look comfortable with his car in practice, having sat out Q1 while Felipe Nasr drove, but set-up changes during final practice helped him take fourth on the grid. A decent start moved him up to third. But it always looked unlikely he was going to keep Ricciardo at bay, or the three-stopping Vettel who appeared during the final stint. Fifth place equalled his best result so far.

Jules Bianchi – Lost time at turn ten on his flying lap but still out-qualified the two Caterhams. Pulled away from Chilton but the Marussia wasn’t on the pace of the Saubers, meaning Bianchi had a lonely race.

Max Chilton – Spun into the gravel twice during practice, so it was a surprise to see him out-qualify Bianchi. However his three-stop strategy dropped him behind Ericsson, losing time. An engine oil pressure problem in the closing stages threatened to end his 100% finishing rate but he made it to the flag again.

Kamui Kobayashi – Claimed Bianchi held him up during qualifying, costing him a few tenths of a second and leaving him last of those who set times. His race ended on lap 44: “I had a pretty scary moment going into turn one when the left front brake failed and I was just able to keep the car out of the wall,” he said. He had a similar scare in Australia, but fortunately Massa wasn’t there for him to hit this time.

Marcus Ericsson – Out-qualified Kobayashi for the first time but was concerned about his car’s unpredictable handling. Having been assaulted by Maldonado on the first lap he brought his damaged car home in last place.

Who was the best driver of the 2014 Spanish Grand Prix weekend?