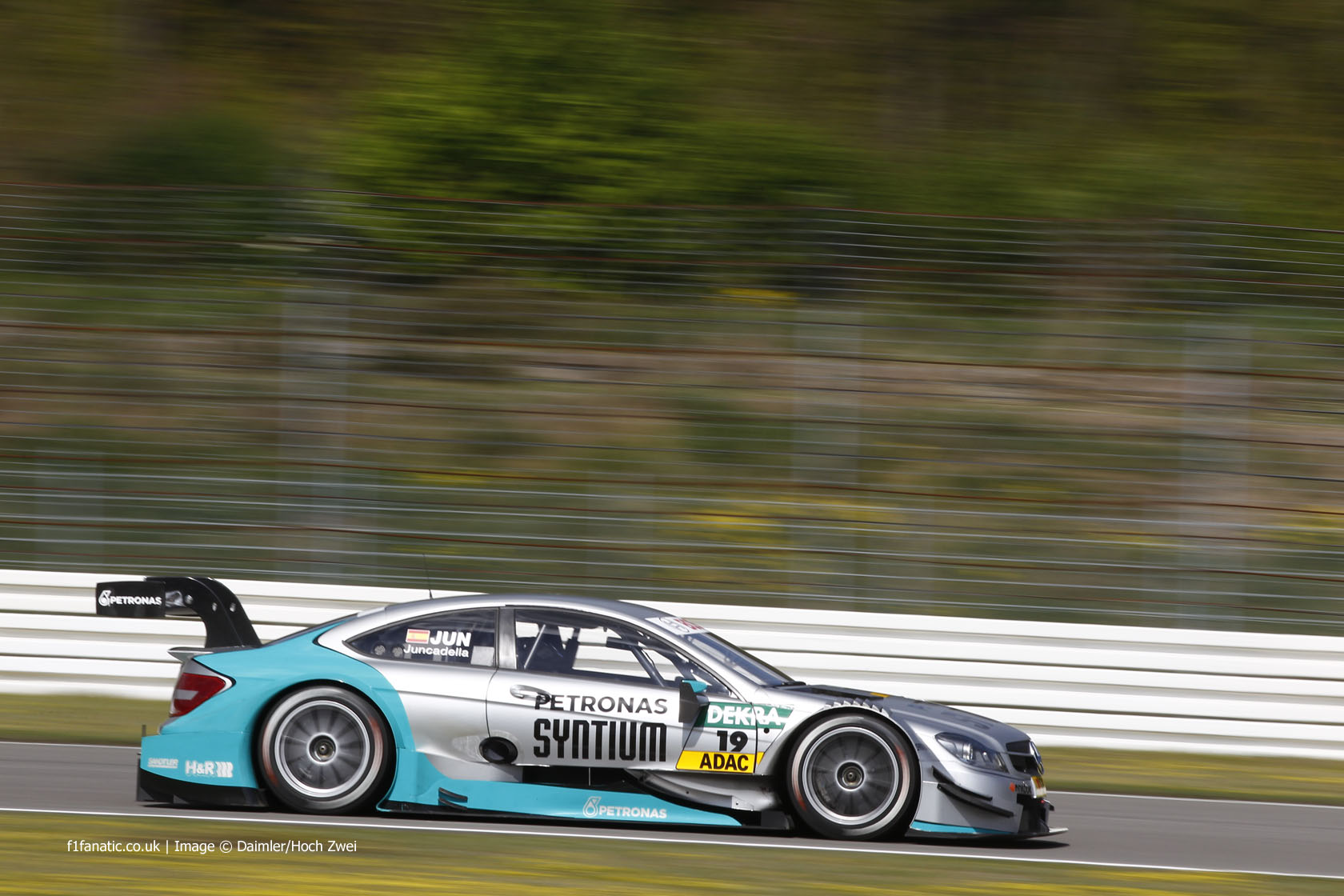 The German Touring Car Masters – DTM – is a cut above other touring car championships in terms of the sophistication of the machinery and the quality of competitors it attracts.

BMW’s arrival two years ago as a third manufacturer alongside long-time rivals Mercedes and Audi was a shot in the arm for the championship which has spurred the level of competition to new heights.

Having tweaked the formula to improve the on-track action, the DTM is now forming ambitious plans for global expansion. The series will return to China later this year – a major market for Germany’s premium car manufacturers – and is even considering an American championship.

The level of technology and professionalism in the championship is arguably exceeded only by Formula One, and drivers like Paul di Resta have shown it is possible to graduate from it to the sport’s top flight.

That makes the DTM a uniquely important and competitive player in international motorsport. Here’s a few more reasons why you should tune in to this weekend’s opening race at the Hockenheimring.

The quality of the field The DTM field is an appealing mix of talented juniors drivers and competitors who have already made their mark in other championships.

Their rivals include a trio of ex-F1 racers, with Paul di Resta returning to the series he won in 2010, Timo Glock beginning his second year in the category following his breakthrough win in last year’s season finale, and Vitaly Petrov making his DTM debut.

Expect series veterans Bruno Spengler and Gary Paffet to feature in the battle for championship honours, along with last year’s runner-up Augusto Farfus and the ever improving Wickens and Christian Vietoris.

The closeness of the field is another major part of DTM’s appeal. Pole position is often decided by mere thousandths of a second. Drivers can go from hero to zero in a short space of time, as demonstrated by Wickens’ failure to get out of Q1 at Oschersleben immediately after his win at the Nurburgring.

Even past champions Timo Scheider and Martin Tomczyk struggled in last last year’s championship, showing just how competitive this melting pot of motorsport stars is. A fair criticism levelled at the DTM in recent seasons is that its abundance of quality drivers and teams has too often failed to produce good racing. Similarly to the correlation seen in F1 in past decades, chassis bristling with aerodynamic appendages may look impressive but they tend not to create exciting wheel-to-wheel racing.

The DTM’s answer to that has been borrow from the F1 book of gimmicks. These include DRS-enabled rear wings, which fold back when an attacking driver is within two seconds of the another car ahead. Unlike in F1, these can be used at any point on a track, giving a more strategic dimension to the competition.

F1 fans will also be familiar with the DTM’s introduction of different tyre compounds which drivers have to use during each race: the ‘standard’ and slightly faster ‘option’ tyres. Couple this with DTM’s preference for shorter tracks (for instance the 1.4 mile Norisring), results in closely-packed racing.

In an attempt to prevent one manufacturer from holding the upper hand for too long, 2014 will see the controversial introduction of success ballast. This is designed not to penalise successful drivers, but to level out performance between cars.

The winning driver, as well as any drivers from the same manufacturer who finished inside the top ten, will have to carry an extra five kilograms at the next race. Drivers in the same cars which finished outside the top ten will have 2.5kg added.

For a series not famed for its on-track action, qualifying diminished in its importance in 2013, with just three of the eleven races won from pole position. In the season opener at Hockenheim Dirk Werner reached the second step on the podium from last on the grid. Despite the outward differences between the cars the similarities between F1 and the DTM run deep. Particularly the strategic nature of the racing, where a pit stop ‘undercut’ is often the easiest way of gaining track position rather than than overtaking on-track. Rockenfeller used this to good effect at the Nurburgring where he finished fourth in spite of a first corner incident that dropped him to the back of the field.

In a bid to introduce more freedom in this area, the DTM has reduced the number of mandatory pit stops from two to one this year, while maintaining the requirement to use both ‘standard’ and ‘option’ tyres. Drivers may also not used the softer tyres for more than half of the race. As degradation tends not to be a factor with Hankook’s rubber, expect just a single stop for each car at most races.

In 2014 the DTM will adopt a three-part qualifying system nearly identical to that of F1. The “pole shootout” format is now a thing of the past.

Given the quality of the drivers, qualifying in DTM will continue to be a spectacle in 2014, where the driving perfection of a lap needed to poach the higher placings is higher than almost any series, and the difference between advancement and elimination is often little more than thousandths of a second.

Also, impressively for a touring car series, the DTM regularly manages sub-three seconds pit stops for changing all four tyres following its move to mirror the 2010 ban on refuelling in F1. Couple that to segmented qualifying, brilliant drivers, professional teams and strategic racing, and it’s clear the DTM shares more with F1 than more conventional touring car series like the BTCC and WTCC. One of the most appealing aspects of the DTM is the lengths the organisers have gone to encourage people to watch. Live streaming via YouTube gives viewers worldwide the choice to watch on a wide selection of devices.

Race and qualifying sessions can also be viewed on demand through the DTM channel, with the entirety of the 2013 season still available to watch.

The coverage itself is also excellent, with quality graphics and reliably good direction. A new commentary team will be in place this year.

In qualifying the unfolding laps are not simply shown versus the fastest lap, but the sectors are displayed as purple (fastest of all), green (personal best) or white (not an improvement), and in the race the highly strategic nature of the races is simply displayed in graphics on the left-hand side, where the number of stops and the tyre compound in use are displayed.

This transforms the viewing experience, making highly strategic racing easy to understand, and is one of a number of areas where F1 can learn from DTM.

Here are some of the cars and drivers of the 2014 DTM championship:

Today’s series has grown more cautiously, but even so four of this year’s ten races will take place outside Germany. Here’s where and when you can catch the DTM in 2014.

Will you be following this year’s DTM championship? What appeals to you about this series? Have your say in the comments.

61 comments on “Why You Should Watch… DTM”