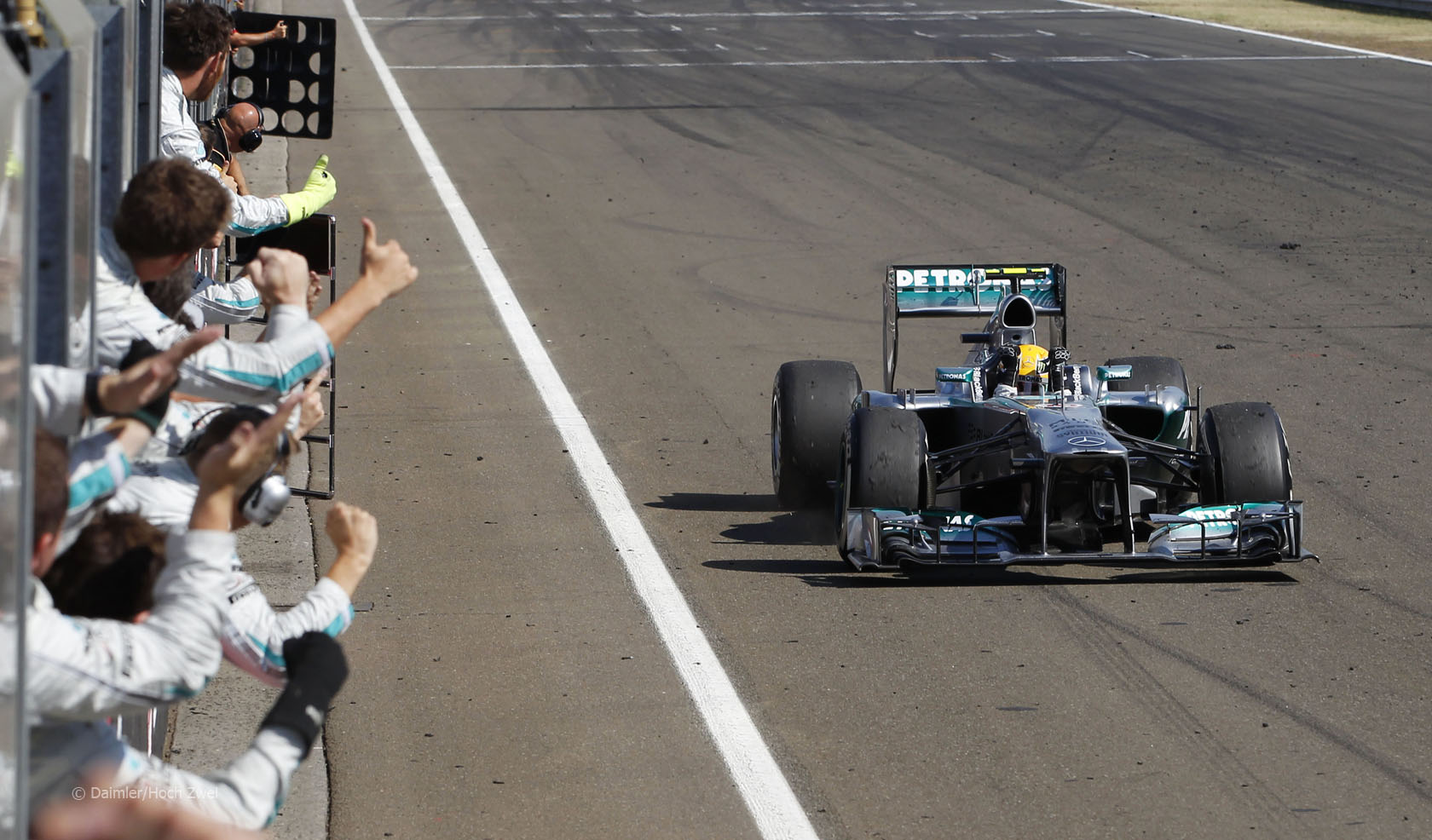 Having switched teams for the first time in his Formula One career Lewis Hamilton never seemed to get completely comfortable in the W04. Even at the end of the year its handling still perplexed him.

Nonetheless a positive first season with Mercedes saw Hamilton walk away with a win – which could have been two with better luck – and an impressively consistent run of points finishes.

The other major change he had to accommodate to was a new team mate. And it was clear from the outset Nico Rosberg was going to prove more of a handful on Saturdays than Jenson Button had.

While Rosberg forged ahead in the rain-hit qualifying session at Melbourne, Hamilton was fortunate to remain in contention after dealing the barrier a glancing blow.

Hamilton took his first podium finish for the team in his second race but that undoubtedly would have gone to Rosberg had Mercedes not ordered their drivers to hold position. To his credit, Hamilton said afterwards Rosberg deserved to finish ahead.

For both Mercedes drivers the opening races featured a familiar pattern of disappointment: qualify well, then slip back after the W04 over-taxed its tyres. Spain was this in extremis for Hamilton, as he finished out of the points after starting on the front row.

Matters improved after that controversial tyre test but in Monaco it was Rosberg, not Hamilton, who led the team to victory in Monaco. Hamilton started alongside his team mate but a slightly dawdling in-lap during his pit stop left him vulnerable to Vettel who grabbed second place off the Mercedes.

In the middle of the year Hamilton seemed to hit the sweet spot with the car. He qualified on the front row of the grid for seven races in a row including four pole positions.

He converted one of those into his sole victory of the year in Hungary. This was a top-drawer performance all weekend, beginning with a superb qualifying lap to narrowly beat Vettel. In the race he made quick passes when in traffic – including a well-judged, opportunistic move on Mark Webber – to get into the precious clear air he needed to look after his tyres.

Hamilton was also in contention for another win on home ground at Silverstone where he led in the early stages before becoming one of the first drivers to suffer a tyre failure. He did remarkably well to recover from that to finish fourth.

His run of pole positions continued with a superb qualifying lap in the rain at Spa-Francorchamps, though on race day he could only offer token resistance to the Sebastian Vettel’s increasingly irresistible RB9. It came to an end after a self-confessedly poor performance in Italy where he was knocked out in Q2. A puncture hindered his progress in the race.

Japan was a case of what might have been after an excellent start was immediately ruined by the slightest of contact with Vettel, leaving Hamilton with a puncture. That misfortune was the second and final time he failed to score all year.

An indifferent couple of races in India and Abu Dhabi were later blamed on chassis damage that had initially gone undetected (his suspension also failed in qualifying at Yas Marina). He enjoyed a stronger race in Austin after that, but a potential podium finish in Brazil was lost after he collided with Bottas.

Although the year featured fewer of the highs which characterised his 2012 campaign, Hamilton was consistently in the hunt for strong points finishes and had a narrow edge over an increasingly well-rated team mate. But he knows much more will be expected from his second season at Mercedes.