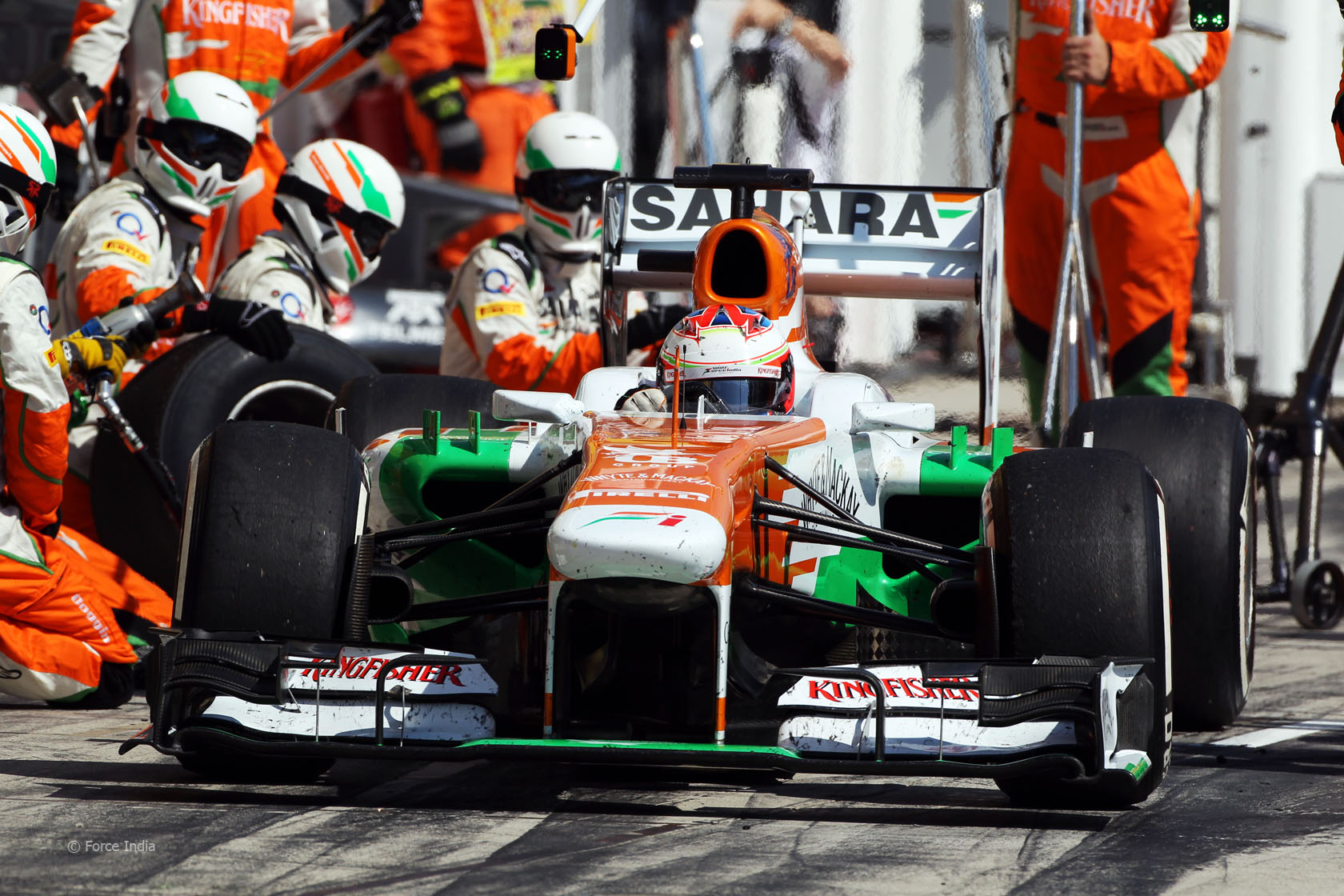 It would be reasonable to describe Force India’s season as being Sauber’s in reverse. Because if any team suffered as a result of Pirelli’s mid-season tyre tweaks, it was this one.

In the early part of the season they were able to manipulate the tyres better than their rivals, eking out longer stints to increase their strategic options. Adrian Sutil even briefly led the season-opener running on an alternative strategy.

But it was Paul di Resta, in his third year with the team, who claimed the majority of their points. This was despite a series of hiccups during qualifying which saw him go out in Q1 during wet qualifying sessions in Malaysia, Monaco and Canada.

Impressively he managed to climb back into the points in the latter two races. He was also on course to in Malaysia as well until a problem with the team’s wheel nuts forced them to retire both cars.

At his home race Di Resta qualified fifth but was found to be underweight by a few hundred grams and sent to the back of the grid. Once again he fought his way back into the points on race day.

But the team had missed another opportunity to claim a larger haul of points, and as things transpired they were soon about to be disadvantaged by the mid-season change in tyres.

Arguably no team suffered more from the move back towards 2012-style tyre constructions than Force India – though some of their rivals might have complained more vociferously. The graph of their finishing positions below shows a clear difference in their pre- and post-Silverstone results.

The timing couldn’t have been worse as the team had already refocused its efforts to concentrate on its 2014 contender. “The change in the tyres for Silverstone has been more than just detrimental to us,” team co-owner Vijay Mallya reflected later in the year.

“Within the mechanical design of the car it?óÔéĽÔäós proving very difficult for us to get optimum tyre performance. We?óÔéĽÔäóve dedicated all our [research and design] tools to the 2014 car, so we are handicapped in a sense.”

A succession of point-less races for Di Resta aggravated the team’s dilemma. And though he was not always to blame for his troubles – particularly when Pastor Maldonado rammed his car in Belgium – he was perhaps not as ready to accept his responsibility for other retirements as he could have been.

Singapore should have marked the beginning of the team’s resurgence. Di Resta was holding tenth and poised to gain places from drivers who were struggling with their tyres. But he skidded into the barrier at Memorial corner with seven laps to go, leaving the team with a single point collected by Sutil.

The team’s returning driver gave a fair account of himself on his return to F1 after surprisingly pipping Jules Bianchi to the drive during pre-season testing. But he seemed to struggle more with the new tyres during qualifying in the season half of the season than Di Resta did.

Fittingly it was in India that the team finally stopped the rot, halting Sauber’s erosion of their points lead with a double points finish. Sixth for Di Resta in Abu Dhabi further strengthened their position, which they held until the end of the year.

The irony of Force India beating Sauber in the constructors’ championship was, of course, that these were the very rivals their 2012 driver Nico Hulkenberg had left them to join. In the off-season they capped their victory over Sauber by getting their driver back for 2014, which will surely be taken as a heartening vote of confidence in their abilities.

9 comments on “Force India hold off Sauber challenge for sixth”