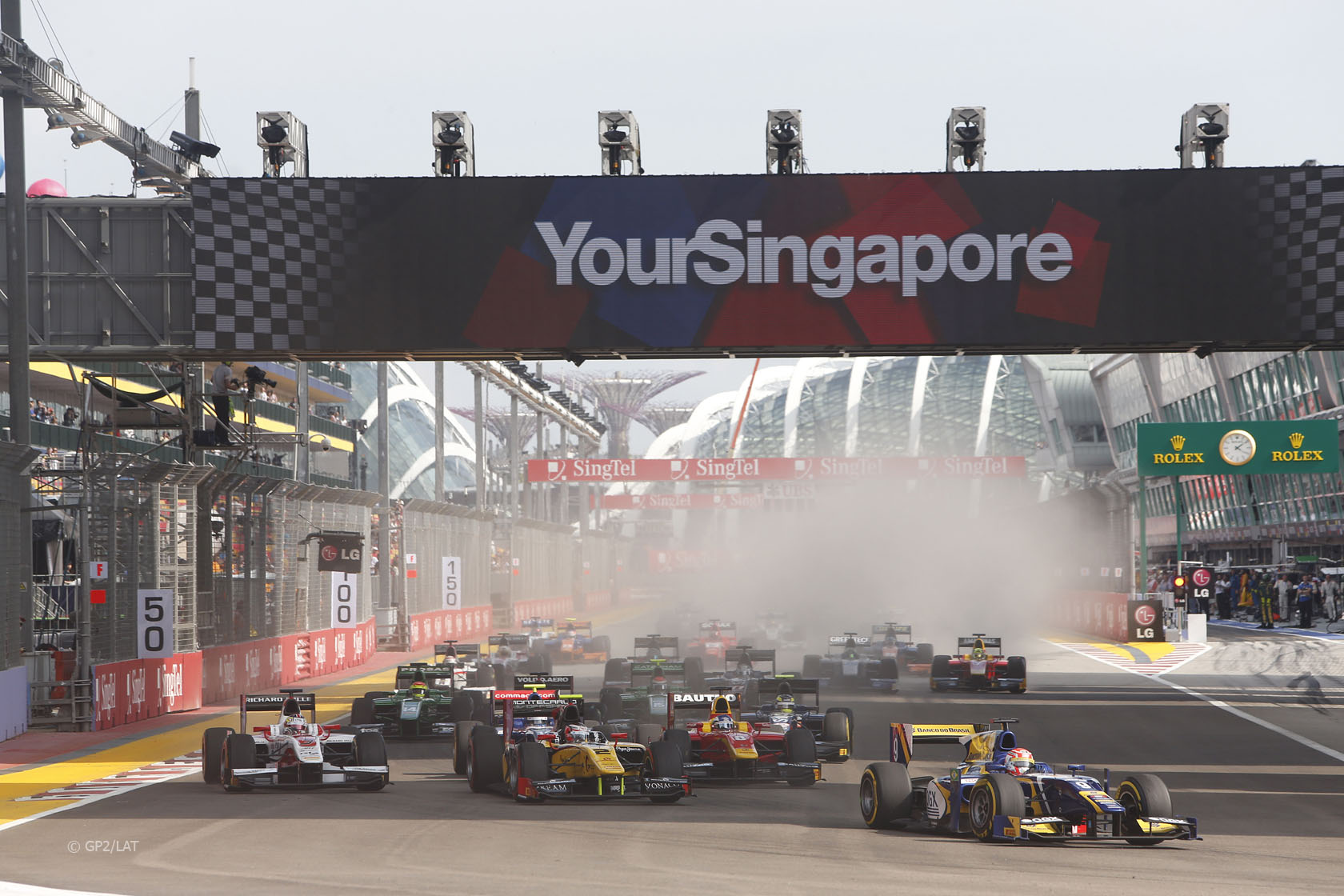 For the first time ever both the GP2 and GP3 championship titles will be decided after the F1 drivers’ championship. And it will happen this weekend in Abu Dhabi.

Five drivers head into the final round of this year?óÔéĽÔäós GP2 championship in Abu Dhabi with a chance of sealing the title and perhaps gaining promotion to Formula One.

In GP3 new Toro Rosso racer Daniil Kvyat is one of six drivers in the hunt for the championship.

Halfway through the GP2 season it looked like the title would be easily won by Stefano Coletti. But a disastrous slump since then means he heads to Abu Dhabi with only an outside chance of winning the title.

Fabio Leimer and Sam Bird clear favourites, separated by just seven points at the top of the table. Felipe Nasr and James Calado, both in their second year of GP2, are also in contention.

Coletti dominated the early part of the season but his championship charge went off the rails halfway through the campaign.

That was until the British Grand Prix weekend, where he failed to score after a collision with championship rival Leimer on the penultimate lap. This put him at the back for the sprint race in which he couldn?óÔéĽÔäót recover.

He managed to finish third in the German feature race at the next round however a poor sprint race meant no points ?óÔéĽÔÇŁ again. Astonishingly, he hasn?óÔéĽÔäót scored since.

With Nasr not winning a race and Calado struggling to recapture the form he enjoyed with ART last year, the fight has been left to Leimer and Bird.

The graph below shows how the championship points battle has developed so far:

A maximum of 48 points are available this weekend as follows: This is Leimer?óÔéĽÔäós fourth season in the series and his second with Racing Engineering. It’s been his strongest campaign so far, and he holds a slender lead in points going into the final race.

Inconsistency has continued to be a feature in his performances this year. He won the opening two Feature races but showed poorly in the Sprint races – failing to score.

Non-scoring rounds in Spain and Monaco were followed by fourth in the British feature race but another failure to score in the Sprint. Since Germany, however, he has finished within the top six in every race – be it Feature or Sprint – and this has undoubtedly helped him back into the championship fight.

Leimer is one of the few drivers who have previous experience of racing at Abu Dhabi, having done so during both the 2009-10 and 2011 GP2 Asia championships.

He is also generally a solid qualifier. However his one of his races in Singapore ended when he collided with Alexander Rossi on the slow down lap.

As yet there has been little to suggest Leimer is on the cusp of landing an F1 drive for next season although claiming the crown could help him to gather sponsorship and potentially a drive in 2014. Bird returned for a third season of GP2 this year having switched to Formula Renault 3.5 last year, finishing third behind Robin Frijns and Jules Bianchi. Having often been unlucky but exciting to watch in his first two seasons he’s been more consistent since his Formula Renault run.

Bird was an eleventh hour signing to new team Russian Time on the eve of the new season. Naturally expectations for the new team were not high, but within four races Bird had given them their first victory.

He added feature race wins in Monaco and at home, since which he has almost always brought the car home in the top ten.

Victories in the feature race at Spa and the Singapore sprint race mark him out as the form contender heading to Abu Dhabi. Like Leimer, Bird has prior experience of the circuit but not much in the way of results.

Bird has strong connections with Mercedes in F1 but that team?óÔéĽÔäós driver line-up is set for the time being. However he has been linked to Williams in the past and there have been suggestions Mercedes could use their new engine deal to place Bird at the Grove outfit. Nasr switched teams to Carlin for his second season of GP2. Remarkably he heads into the final round with a chance of winning the championship despite not having won a race so far this year. That will have to change for him to claim the crown this weekend ?óÔéĽÔÇŁ and the cars will need to fall in his favour too.

Nasr?óÔéĽÔäós consistency has been the bedrock of his championship tilt. Fourth and second in Malaysia meant Nasr came away looking like the best man to challenge Coletti. This was proven by a string of top four results – including four podiums – until the British round by Nasr being the only driver even remotely close to Coletti.

A first retirement of the season in the British feature race dealt a blow but he put in a great recovery drive in the sprint to finish seventh from the back of the grid. He bounced back in Hungary with fourth and third.

Coletti?óÔéĽÔäós slump looked likely to rewards Nasr?óÔéĽÔäós patient accumulation of points. But in Belgium and Italy retirements from both feature races spoiled his weekends. As in Britain, it proved a double blow as the result of the first race sets the grid for the second.

Second place to team mate Jolyon Palmer at Singapore has kept him in the hunt. His lack of experience relative to the championship leaders will count against him this weekend as he is yet to race in Abu Dhabi. As early as Monaco Coletti seemed a shoo-in for the title. This was something of a surprise as the Rapax driver has often been hard on his tyres ?óÔéĽÔÇŁ an undesirable trait in the Pirelli era.

He set out his stall with a win and three other podiums in the opening four races, plus a fistful of bonus points for pole position and fastest lap. Meanwhile his likely championship rivals made stuttering starts to their campaigns.

Fourth in the Spanish feature race was followed by his second sprint race win, a feat he repeated in Monaco. This was despite involved in an enormous, 12-car pile-up at turn one on the opening lap.

Since then Coletti?óÔéĽÔäós championship hopes have crumbled. It is highly unusual in a championship where points can be won down to tenth place to see such a large lead dismantled so quickly.

His season started to unravel in Britain where he failed to score in either race following a collision with Leimer on Saturday.

Third in the German feature race suggested Silverstone was just a blip. In reality that podium was the outlier as Coletti has failed to add to his points tally since then.

A combination of bad luck and poor pace are to blame, but even if he were to recapture his early season form he would still need luck on his side to overcome his deficit to the leaders. Like Nasr, another sophomore driver, and one of whom big things were expected having been top rookie last year and remained with crack squad ART (formerly Lotus GP).

He confirmed this by finishing second to Leimer in the opening race of the season. But his championship went off the rails quickly as an error on the opening lap of the Sprint race eliminated himself and Leimer, and earned Calado a grid penalty.

Poor rounds in Bahrain and Spain saw Calado ground in the championship and it was starting to look as though ART – who have always produced a car capable of fighting at the front – were struggling.

His early-season troubles may have been accounted for by chassis damage which went undetected for several races. Calado has also said that having a team mate as far off the pace as Daniel Abt has (surprisingly) been means the team are unable to make rapid progress with their set-up in GP2?óÔéĽÔäós very short practice sessions.

Nonetheless Calado built up his points total with a solid round in Monaco, a podium during the sprint race in Britain and a pair of second place finishes in Germany. He grabbed a win in the sprint race in Belgium having finished eighth the previous day, earning pole position, but on the podium afterwards admitted he still isn’t happy with the car.

Calado?óÔéĽÔäós chances of winning the championship in Abu Dhabi are approximate to Fernando Alonso?óÔéĽÔäós of beating Sebastian Vettel. Having never raced in Abu Dhabi before however, and being so far off the lead Calado will be looking to just have a strong weekend in front of the watching eyes of the Formula One paddock.

However Force India saw potential in the Racing Steps Foundation-backed driver after giving him a run at the Young Drivers?óÔéĽÔäó Test at Silverstone. That has already led to a pair of practice outings for the team and there may be more on offer for him next year. While the GP2 competitors are battling it out for the chance to get into F1, one of the more junior GP3 racers is already assured of his progress to the top flight. Daniil Kvyat, who races for the MW Arden team set up by Mark Webber and his Red Bull team principal Christian Horner, will drive for Toro Rosso next year.

There are parallels between the GP2 and GP3 title contests. Although multiple drivers are in the hunt – one more in the case of GP3 – only two have a realistic chance. Kvyat is one of them along with Facu Regalia, who is seven points ahead at the top of the points standings.

As in GP2 the early points leader is not out of contention. Tio Ellinas is the Coletti of the series: The Marussia Manor driver was 19 points clear at the head of the table following the German round but has suffered a string of misfortunes since then, including being taken out by team mate Dino Zamparelli at Monza.

It would be a tremendous shock of Ellinas were able to overcome his 43 point deficit to claim the title as heads into the final weekend in sixth place. Kevin Korjus is 31 points down, Conor Daly 34 adrift and Jack Harvey is a point ahead of Ellinas, making all four long shots for the title. GP3 uses the same points system as GP2 meaning there are also 48 points on offer in these two races.

The contest is likely to be between Kvyat and Regalia. Although both drivers failed to score in the opening round in Spain, both have consistently racked up points since then. But Kvyat took 20 points off his ART rival in Monza and following the boost of his Red Bull announcement has momentum on his side.

Who do you think will scoop the title in Abu Dhabi? And who will join Kvyat in scooping an F1 drive for next year?

This article was re-posted to amend an error.