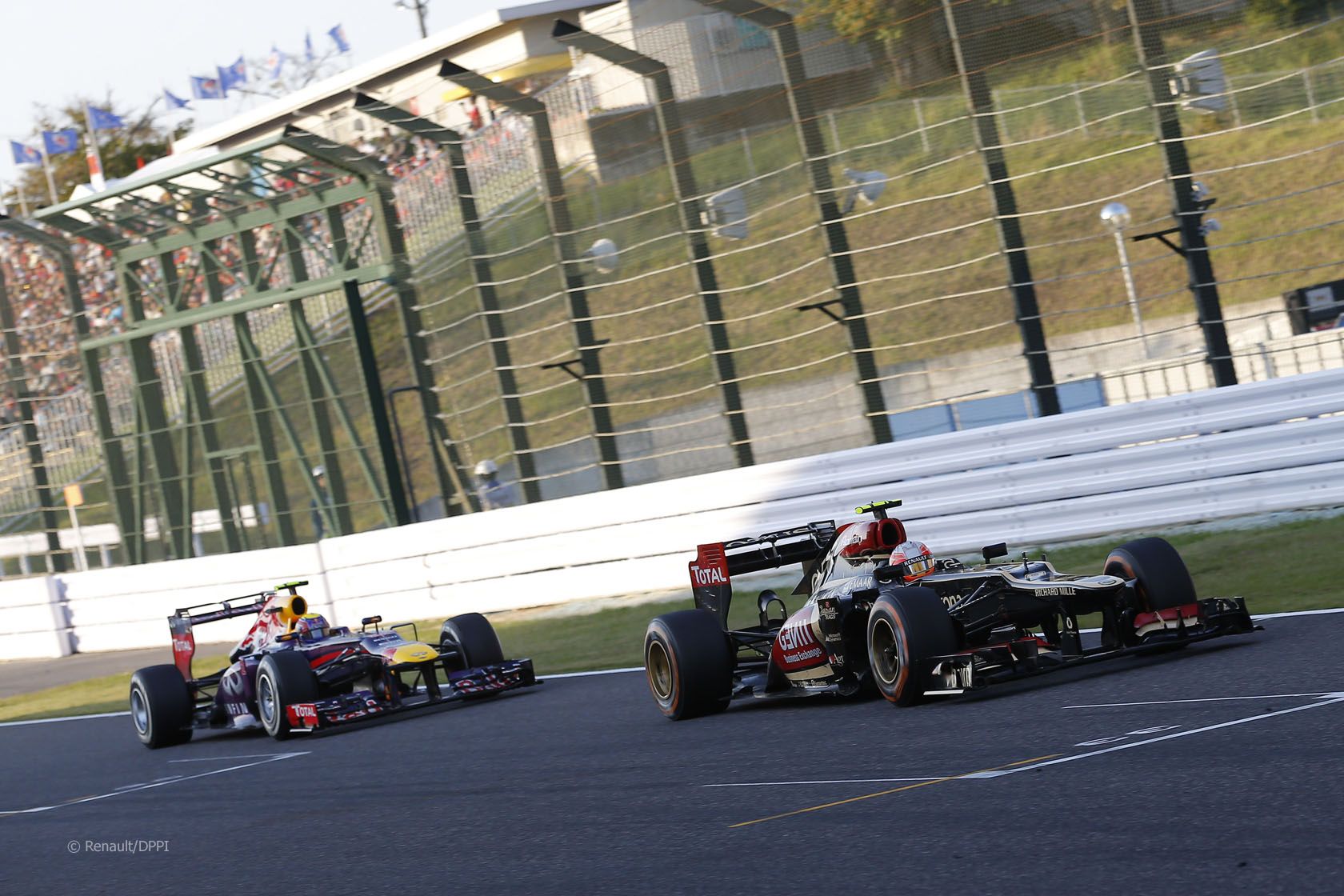 Suzuka, another of the “classic” F1 tracks and a regular stop on the F1 calendar since the late eighties, aside from a couple of trips to Fuji – and another firm fan favourite.

A decent average score of 7.338 out of ten puts the last race smack in the middle of the first 15 rounds – an indication that the season has been a decent one so far. It ranks second out of the last six Japanese races.

During the race it briefly seemed we might see a new winner in Romain Grosjean, who took an early lead ahead of the Red Bull pair, and went on to a well deserved podium finish.

The race also saw Sauber’s first double points haul of the year and drive through penalties for Felipe Massa, Nico Rosberg, Daniel Ricciardo and Charles Pic – the latter earning his before the race had even begun.

Here’s what F1 Fanatic readers had to say about the Japanese Grand Prix:

Again I have to say, this was a good race for 2013 standards. The battle for the lead was a charade: during the first stint, it was a matter of maintaining the gap and looking after the tyres.

In the second stint, it became apparent how much better Red Bull was. Vettel just breezed past Grosjean, while Webber did the same, with a little bit more effort. It looked exciting, but it really wasn?óÔéĽÔäót.

There were a lot of passes, too bad most of them DRS-assisted, but thankfully there were others too: Raikkonen on Hulkenberg round the outside of the chicane was great, as were some into 130R.

So a good race, but it felt more like a smoke screen than an actual race
@Andae23

Plenty of action down the field, but the result was inevitable and predictable (the top three at least). Good results for Sauber and Grosjean, not a bad recovery from Rosberg but in all honesty ?óÔéĽÔÇŁ and it pains me to say this ?óÔéĽÔÇŁ I don?óÔéĽÔäót know why I bothered getting up early this morning to watch this race.

I?óÔéĽÔäóm lucky enough to watch the race on Sky and believe they have the better show, but I?óÔéĽÔäóm tending to agree with a couple of my mates (who don?óÔéĽÔäót have Sky and are big fans of the sport) and may just start watching the highlights show of the races for the rest of the year.
@Jamesf1

Some great midfield action, a brilliant battle for the lead with mixed two versus three stop strategies and all around a classic grand prix track. I would have loved to see either Webber or Grosjean win, but still a very entertaining afternoon of racing.
@Quadquantum

Given that the Red Bulls are over 30 seconds ahead of everyone else, it is pretty impressive for Grosjean to be able to challenge them at all in the first place. Besides, the benefit of clear air for Grosjean was only because he qualified much better than Raikkonen.

Grosjean is outperforming the Lotus and/or Raikkonen is underperforming in qualifying, likewise for Alonso. Either way, it doesn?óÔéĽÔäót look good on both Alonso and Raikkonen who need to step up their game in qualifying.
@Woshidavid95

Brilliant strategic race from vettel. Watching Grosjean grow as a driver is a great sight indeed. A genuine three way battle for the lead… what more can I ask for?
@Anele-mbethe

I was hoping that Grosjean and Hamilton could make good starts and take advantage of the Red Bulls because Webber was first and he usually has poor starts, too bad Hamilton had a flat tyre, but Grosjean did a great job.
@Jcost

The lack of authenticity in the racing has been a recurring theme this year:

Had some good battles but still far too much tyre management. A lot of it didn?óÔéĽÔäót feel like proper racing, though occasionally the tyres did give some good train battles.

They say you should take the good with the bad, but these tyres are more bad than good. One of the best strategy races though.
@Philereid

It might not be remembered as an all-time classic, but the mere doubt that Vettel would have to work for the win was enough to keep the excitement. Don?óÔéĽÔäót get me wrong, I?óÔéĽÔäóm a huge Vettel fan, but his best races have been where he?óÔéĽÔäós had to fight for it (Whether he?óÔéĽÔäós won or lost) and he certainly had a challenge on his hands.

However, I did feel DRS was a bit too strong in the race today. Very few overtakes happened outside the DRS zone, but maybe that?óÔéĽÔäós the drivers who should be looking to attack elsewhere (I know a few had a go at 130R). Tyres might have been fragile as some have said, but if they were completely flat-out, then we wouldn?óÔéĽÔäót have had Grosjean being anywhere near the Red Bulls, and Webber wouldn?óÔéĽÔäót have been near Vettel either. Having to limit the tyres is the best way of keeping the pack together (And can also allow strategy to have drivers build gaps should it be needed e.g. Vettel Singapore)

Tight racing all down the field, a few surprising results in Grosjean and Gutierrez (both of whom have long been deserving this) and some lovely tactical decisions resulting in a decent race
@Keeleyobsessed

Very enjoyable. A good strategic race and a brave fight from Grosjean in an inferior car. There were some good battles and the nature of the track neutered DRS to the point where it was pretty much irrelevant.
@lin1876

Dizzy felt DRS ruined what could have been the high point of the race:

Vettel?óÔéĽÔäós pass for the lead showed why DRS should be banned.

He slip-streamed alongside Grosjean without using DRS and that would have been a thrilling side by side fight into turn 1, However he then remembered he had DRS and was then driven clean past really easily.

DRS made what could have been a thrilling fight into turn one somewhat less thrilling.
Dizzy

But above all, many fans simply enjoyed seeing the cars in action on a great track:

I always enjoy watching races at Suzuka, one of the three best tracks along with Spa and Interlagos. Superb track, great atmosphere and challenging driving conditions.

Today?óÔéĽÔäós race was excellent from a strategic point of view and a well-deserved win for Vettel. He showed precisely why Webber is unable to match him despite having the same kit (nonsensical conspiracy theories ignored).

While Vettel overcame a relatively poor start to make the best of the situation, Webber failed to take advantage of his pole position. As usual, his tyre management was not as good as Vettel?óÔéĽÔäós and unlike his team mate, Webber repeatedly put his car in an unfavourable position while trying to pass Grosjean on the DRS straight.

Some interesting battles at the back as well. Gutierrez seems to be a young man to watch; he certainly has talent.
@Loup-garou

13 comments on “Japanese Grand Prix gets average rating for 2013”