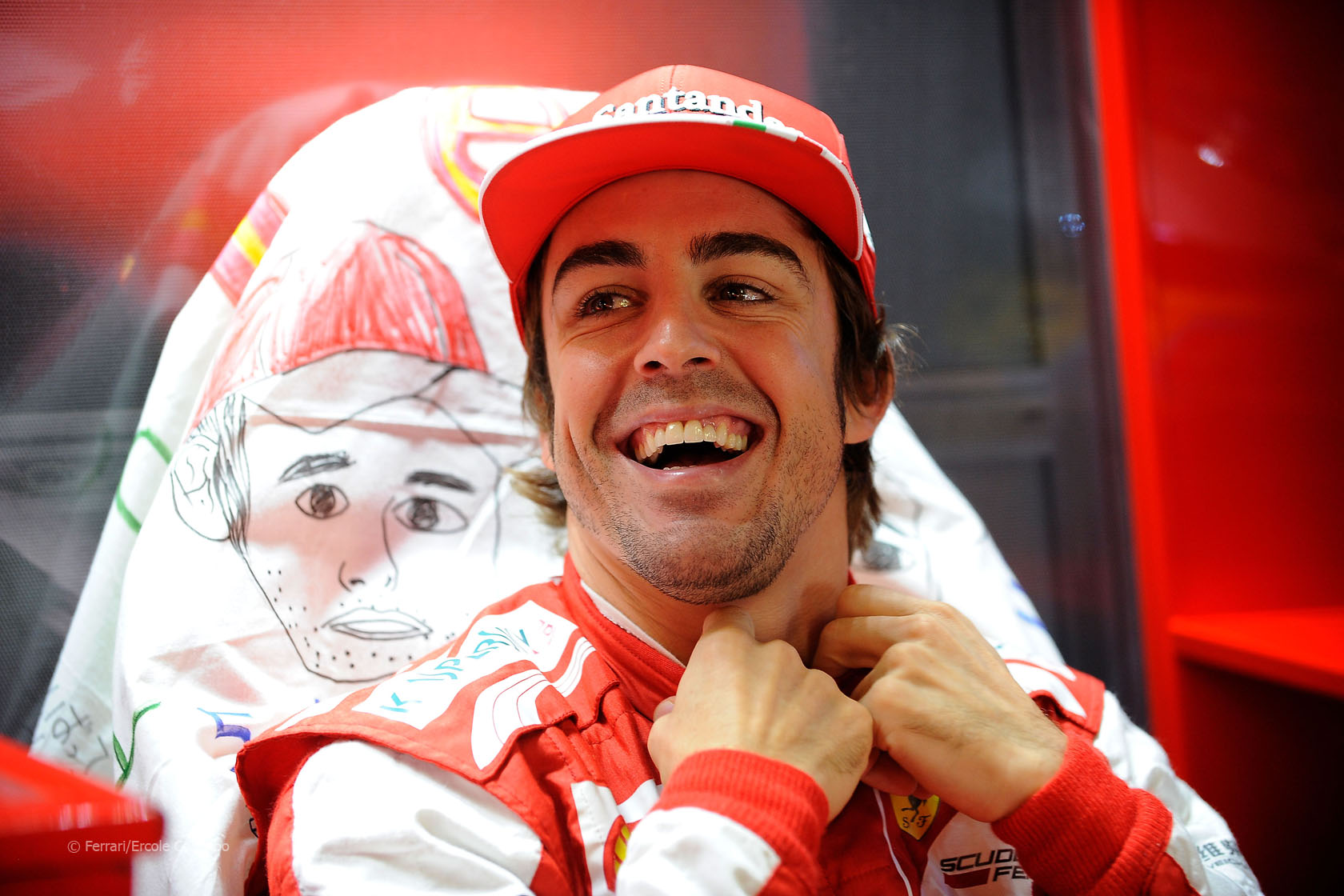 Fernando Alonso at least found one thing to be cheerful about after seeing the world championship slip further away in the Japanese Grand Prix:

To see my name leading the points record for a sport like Formula 1 is something I never imagined. Thanks to everyone! 1571 points.

Ferrari team principal Stefano Domenicali hailed Alonso’s appearance at the top of F1’s all-time points scorers chart as “proof of his extraordinary talent and something which makes us very proud”. Alonso’s formidable talent has already earned him two world championships and more race wins than all bar four drivers in the sport’s history. But, as explained here before, the greatest points haul achievement is meaningless.

This is for the obvious reasons that finishing places today are valued much more highly than they used to be and there are far more races in the season. Today’s calendar is pushing 20 races per season and 101 points are distributed at each round. F1’s inaugural season in 1950 had just seven races with a total of 24 points available at each.

So what does the fact that Alonso has reached 1,571 points, surpassing Michael Schumacher’s 1,566 at the top of the table, actually tell us? Little more than that they are both extremely good F1 drivers, something we already knew.

However we can make an attempt to address the shortcomings of the statistics. This table compares the results of all the world champions, plus the top 25 points scorers who never won a title, by adjusting all their points to the current system and by averaging that total against the number of races they competed in: Sebastian Vettel’s inexorable accumulation of race victories continued in Japan, but this one was special. It was his fifth consecutive grand prix win, something only five other drivers in F1 history have achieved.

He joins Alberto Ascari, Michael Schumacher, Jack Brabham, Jim Clark and Nigel Mansell in scoring five in a row. The last of those drivers to do so was Schumacher, who on separate occasions in 2004 won seven and five races consecutively.

Suzuka remains Vettel’s stomping ground – he now has four wins in five starts at the track. He failed to continue his 100% pole position record at the track though that was most likely because his KERS had failed.

However he started from the front row for the seventh race running, something Lewis Hamilton also achieved this year.

If Vettel is victorious once more in India he will be the third driver in F1 history to win six races in a row – not to mention being the third driver to win four world championships in a row, joining Schumacher and Juan Manuel Fangio.

Esteban Gutierrez scored the first points of his F1 career with seventh place. He is the first rookie driver this year to claim his first points.

That means Brian Henton is once again the only F1 driver to have set fastest lap in an F1 race but never scored a point. Henton did so for Tyrrell in the 1982 British Grand Prix.

Ferrari claimed points for the 63rd race running which means in India they can tie McLaren’s record for most consecutive points finishes by a team, which they set earlier this year. Ferrari have scored in every race since the 2010 German Grand Prix.

However Ferrari lost the record for most pole positions by an engine builder to Renault. Mark Webber’s pole position was their 209th, moving them one ahead of Ferrari. More details on that in last week’s Stats and Facts.

Webber scored the 12th pole position of his career 364 days after his last once in Korea. It gives him as many as Gerhard Berger and David Coulthard. Coincidentally Webber’s 18th fastest lap also put him level with Coulthard, his previous team mate at Red Bull.

Webber out-qualified Vettel for the first time this year and Max Chilton also lapped quicker than Jules Bianchi in qualifying, meaning no driver has a perfect score against their team mate in qualifying this year.

Red Bull have now had at least one car on the podium for the last ten races in a row.

This was the sixth race Romain Grosjean has led. He headed the field for 26 laps at Suzuka having previously led a total of 12 laps in his career.

Spotted any other interesting stats and facts from the Japanese Grand Prix? Share them in the comments.