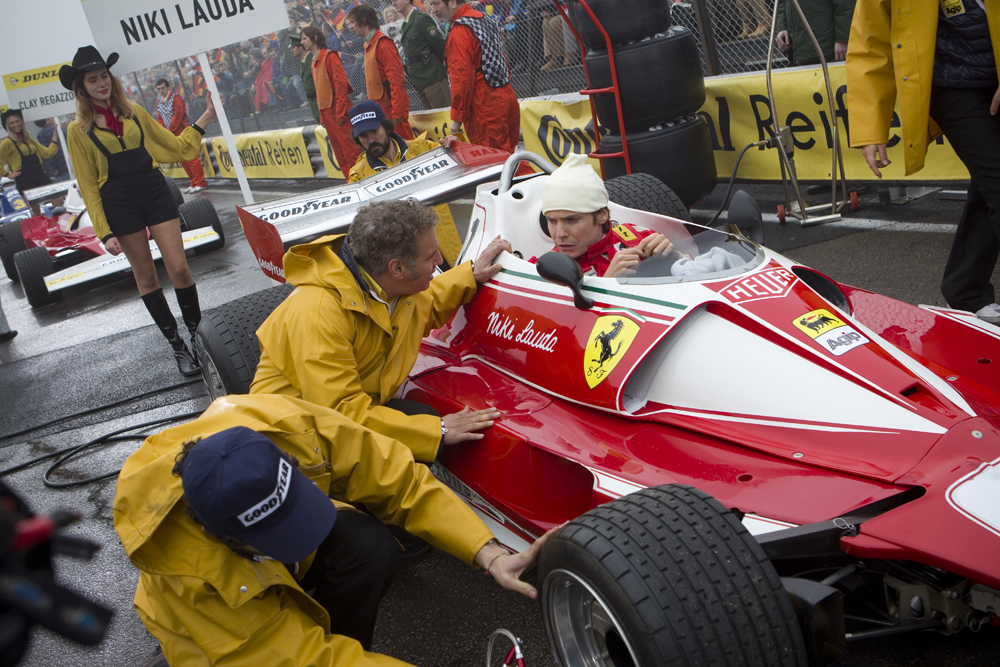 Rush director Ron Howard says the biggest challenge of creating his film about the 1976 F1 season was getting the look of the car right.

Speaking to F1 Fanatic and selected media prior to the official opening of the film last week, Howard said casting the cars was a “huge challenge” which “threatened our budget” in the early stages of making the film.

Eventually the film’s investors provided funds for them to conduct some exploratory filming at a historic Formula One race at the Nurburgring. This was a “huge break”, according to Howard.

“We were just picking out the cars in the race that were appropriate to our season,” he said. “And we did well, we actually got some shots that are in the movie, we learned a hell of a lot.”

“More importantly we were able to meet the owners of these cars. When I heard about these people who owned the historic Formula One cars I thought they were just hobbyists and these were sort of like road rallies where they would take the cars out, start them up, rev the engines a few times and maybe ave to the fans, take some pictures and drive around.

“But they race! They compete, they spin out, they crash, all of that. And they were willing to be a part of our movie once they believed it was going to be approached in an authentic, serious, way.”

The historic racers’ cars fleshed out the field for the recreated races. But for the starring cars of rivals James Hunt and Niki Lauda – the McLaren M23 and Ferrari 312T2 – specially commissioned replicas were built.

“If they were going to be destroyed we’d start with a replica and then destruction would be [computer-generated] elements or something added to it,” explained Howard, “but everybody involved in the movie knew the cars, the replicas being built, would have to sit side-by-side with the real thing.”

As those who’ve seen Rush will know, the dedication to authenticity extended as far as getting the race-ro-race detail changes to the cars right. For example, Hunt’s M23 begins the season with a tall, red airbox which is later swapped for the distinctive L-shaped configuration.

It was just as important to get the film’s historical elements correct as some original video has been incorporated into the film:

“People also knew that the wardrobe would have to cut with the wardrobe we were seeing in the archival footage and that the production, design and art direction of the sets that we were building would also have to sit alongside shots of the real Brands Hatch or the real Monaco or the real Nurburgring,” said Howard.

“That was useful because it gave everybody a guide but it certainly raised the bar and had to raise everybody’s standards.” The accuracy of Daniel Bruhl’s portrayal of Lauda has been hailed by many reviewers. But those behind the film originally wanted to someone else to play the role.

“The German investors were a little reluctant about Daniel,” said Howard. “They honestly wished we would get an American movie star to play Niki Lauda and just do a bad German accent.”

“But that’s not what [scriptwriter] Peter [Morgan] wanted nor what I wanted and we knew Daniel’s an artist who would take on the daunting task of recreating somebody who’s still so well-known, still so iconic.”

But while the film makers were quick to settle on Bruhl for the role of Lauda, it took longer to cast Chris Hemworth Hunt:

“Looking at the list, seeing who’s available, thinking about it, there was sort of no one who was fitting the mould as well as Daniel did for Niki. And my heart began to sink, I began to feel like we really shouldn’t go ahead with this, it’d be compromised, as excited as I am about the project.”

Hemsworth had come to prominence for his role in the 2011 film Thor, directed by Kenneth Branagh. But Howard had doubts over whether the Australian could play a Norse god and an eccentric English playboy racing driver.

“I’d met Chris and liked him, liked him a lot in Thor,” said Howard, “but no way of knowing whether he could be James Hunt material.”

“Plus he was huge, when I saw him. He was Thor! He wrote me a note said ‘by the way, Thor couldn’t get into a Formula One car, but I’m the same height as James and I’ll be his build, if that’s what it takes’.”

“Kenneth Branagh said he really had a lot to offer as an actor. Anthony Hopkins told Peter the same thing, that he knew from 360 [another 2011 film].”

“And one day Chris just sent in a self-made audition tape. And he took some of the script and just did a few group speeches and it was so cool and such a confidence-builder. He had the body lanugage, the beginnigs of the sound, the attitude. He was transforming himself as a good actor does.”

That sealed Hemsworth’s casting in the role. “Then it was done,” said Howard. “We knew we had a movie.” Howard was new to F1 when he began researching Rush. But after a visit to the Monaco Grand Prix he quickly decided it was a compelling subject for a film – “smart, intelligent, thinking person’s entertainment”.

When Morgan approached him with the script for Rush, Howard knew F1 “was cool and sexy and international and kind of upscale – there was an element of glamour”.

“But I also knew that it was visceral,” he added. “To experience Formula One live is to first hear it and then sort of feel it in your chest before you even lay eyes on the car. And that’s what I remembered from the race.”

“Walking over some of the bridges, feeling the whole bridge vibrate, they have it all boarded so that nobody can watch the race from the bridges but you walk over and you just would hear this thing charging through.”

“It’s on a primal level,” Howard enthused, “if it was nature you’d be running for the hills, there’s be a herd coming your way!”

Howard felt the story of Hunt and Lauda’s rivalry gave Rush the right ingredients for an exciting production:

“The combination of a bona fide, big-screen experience that hopefully transports the audience and these rich, fascinating, entertaining characters was, I thought, a great combination and a chance to do something remarkably fresh.

“That’s a hard thing to be able to say about a lot of movies that are getting the green light today.” But as with the casting of Bruhl there were some who disagreed with the film’s direction – not least, the desire to avoid casting either driver as the hero of the piece:

“I did have friends in Los Angeles who read the script and said ‘who are we rooting for?'” Howard admitted. “This is the sort of traditional script note that you get.”

But it was an angle the film makers were keen to avoid: “That’s one of the unconventional aspects of this. I think people are pleasantly surprised by the move because they expect a more conventional kind of sports narrative to roll out.”

“These aren’t conventional characters and the good news was it kind of forced Peter, myself, all of us to take a narrative that doesn’t unfold the way you would write it in a movie script and make it work.

“I don’t think it’s fair to take sides, I don’t think there was a good guy or a bad guy there. I felt like it was a rival story and a dual survival story.

“I think the big narrative question was, is whatever was fuelling these guys to compete, including their rival, going to do them in? Are they going to navigate this gauntlet that this 1976 season turns out to be? That’s the tension, that’s the drama.”