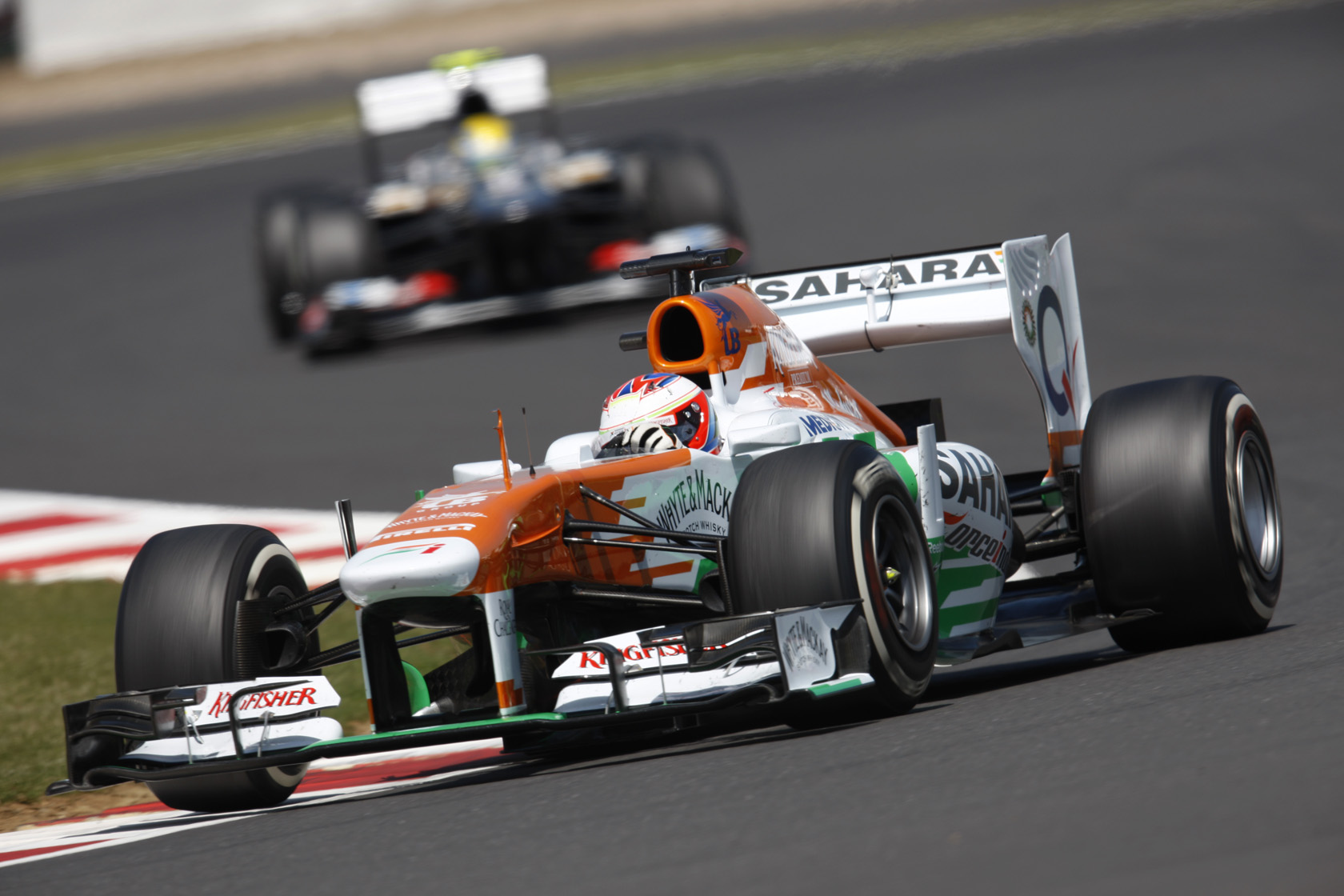 Formula One cars have been getting heavier for several years. That trend will continue in 2014 with the minimum weight limit set to jump from 642kg to 690kg – an increase of over 7%.

Weight is the enemy of performance in a racing car but the days of teams be able to run the lightest car they could get away with are long gone. The first minimum weight limit was introduced in 1961.

Its introduction was for the same reason many other changes have been forced upon F1 car designers: safety.

The 1958 season alone saw the deaths of Peter Collins, Luigi Musso and Stewart Lewis-Evans. For 1961 the sport’s governing body reduced engine capacity to 1.5 litres to curb speeds, and introduced the first ever minimum weight limit for F1 cars.

Here’s how the minimum weight limit for F1 cars has changed since it was introduced in 1961:

The rule makers believed excessively light cars had become an unacceptable hazard to drivers. In preceding seasons it was not uncommon for teams to drill holes in parts of their cars, such as the steering columns, to shave off weight in the pursuit of performance.

Unsurprisingly it was Lotus owner Colin Chapman, whose preoccupation with weight-saving bordered on obsession, who pointed out that light weight and safety were not necessarily mutually exclusive, and that recent fatalities had befallen drivers of the heaviest cars on the grid.

Chapman not unreasonably argued a heavier car is harder to slow down in a crash and dissipates more energy in an impact, making it more dangerous. But it was also true that many of his drivers were concerned his pursuit of low weight went beyond merely putting too little fuel in his cars and resulted in chassis that were too fragile and put them at greater risk.

However the weight limit was here to stay and in 1965 it was revised upwards when F1 engine capacities doubled to three litres. As the drive for safety increased momentum at the end of the sixties and into the seventies further rises in the weight limit were sanctioned to allow teams to incorporate innovations such as roll hoops and mandatory fire extinguishers.

By the mid-seventies most teams were able to get their cars down to the minimum weight limit or within a few percent of it. They were also starting to become more secretive about the weight of their cars. As the graph shows, the minimum weight limit has rarely gone in any direction other than up. But during the eighties it was temporarily reduced.

At the beginning of the decade several teams had switched to using 1.5-litre turbo engines. These proved spectacularly powerful but their higher weight and greater thirst for fuel meant the cars did not trouble the minimum weight limit. Rival machines which still used normally aspirated engines were far lighter.

In the early eighties the political clout of the non-turbo teams, most of which were aligned to Bernie Ecclestone’s Formula One Constructors’ Association, helped them secure some reductions in the weight limit to help them remain competitive.

Several of them were able to build their cars well below this lower weight limit and pursued various rule dodges though which they could do so. In 1981 Ecclestone’s Brabham team were accused of having special lightweight chassis which was only used during qualifying and did not appear on race day.

In Monaco, where Piquet planted his Brabham BT49 on pole position, rival Jacques Laffite told L’Equipe: “The practice car has carbon fibre brake discs which save 12 kilos, and I’m told that the car also has a tiny fuel tank, much lighter than the normal one. The car should be weighed as soon as Piquet stops, before the mechanics can touch it. But no, no one will do anything because it is a Brabham, owned by Ecclestone, and no one can touch him. Everyone is frightened of him.”

Brabham and rival teams took this practice a step further the following year. Taking advantage of a rule which allowed water tanks to be replenished after a race before a car’s weight was checked, they built cars with large tanks – ostensibly for brake cooling purposes – which were emptied at the start of a race. After the car completed the race beneath the minimum weight the tanks were topped up afterwards so the car passed scrutineering.

At the 1982 Brazilian Grand Prix FISA (now the FIA) threw out the winning Brabham of Nelson Piquet and second-placed Keke Rosberg’s Williams, declaring both were beneath the weight limit. In protest several FOCA teams boycotted that year’s San Marino Grand Prix on the fatuous grounds that they needed time to redesign their cars to reach the true weight limit. But the writing was on the wall for the normally-aspirated runners and one by one the top FOCA outfits switch to turbo power – Ecclestone’s Brabham in 1982, McLaren and Williams the year after.

In an attempt to maintain some degree of parity between turbos and non-turbos, F1 temporarily became a two-tier formula. In 1987 and 1988 non-turbo cars were allowed to run at a lower weight limit. But it proved a vain hope: in these two seasons, as in the three before them, every race was won by a turbo.

From 1989 turbos were banned but the lower minimum limit of 500kg remained. By 1995 it had jumped up by almost 100kg due to a change in how the rule was enforced: for the first time the minimum weight limit referred to a car plus its driver.

Some drivers saw this as an opportunity to gain an advantage. When Michael Schumacher turned up to be weighed before the the first race of the season he tipped the scales at 77kg. That the world champion might have gained eight kilos in weight during the off-season aroused suspicion and led to suggestions Schumacher was trying to gain a performance advantage by having an underweight car. His weight after the race was found to be just 71.5kg, but both he and his Benetton were within the limit.

The 595kg limit remained unchanged for over a decade. But in recent years the minimum weight limit has risen rapidly and next year it will reach almost 700kg.

Recent increases in the minimum weight limit appear to be less to do with safety. The introduction of mandatory impact-absorbing structures and crash tests have proved highly effective in making cars safer in high-speed accidents. Changes in the technical formula, such as the introduction of KERS in 2009, have prompted most recent revisions to the weight limit.

In the case of KERS, despite the rise in minimum weight some teams found their units were so heavy that it was only worth running them if their drivers were beneath a certain weight. BMW, for example, used KERS on the car of Nick Heidfeld, who weighed 59kg, but not Robert Kubica, who weighed 72kg.

The minimum weight limit was subsequently raised to prevent driver weight being a deciding factor when it came to using KERS. But even so the fact remains that a shorter driver can weigh less, making it easier to get his car within the weight limit. Any ballast needed to reach the weight limit can be situated in a position which better optimises the car’s centre of gravity.

Getting the balance of driver weight and ballast right is essential as Paul di Resta found out to his cost at Silverstone earlier this year. Having qualified fifth he was excluded from qualifying and sent to the back of the grid after he was found to be too light by just 500g.

Next year’s planned 48kg hike in the minimum weight limit comes as turbocharged engines are set to return, along with a wealth of complicated Energy Recovery Systems. The minimum weight for engines will rise from 95kg to 145kg.

The restrictions on car weight are getting ever stricter. In 2011 a new rule limited the teams to a narrowly-defined weight distribution limit in qualifying. This was introduced “for 2011 only” yet has remained part of the rules in successive seasons.

Next year teams will effectively be limited to a front-to rear weight distribution of 46% to 54% in qualifying, with 0.5% leeway in either direction.

A little over five decades ago F1 designers had a free reign in terms of the weight of their cars. Today there are minimum weights for the chassis, engine and other parts, as well as a fixed weight distribution.

As F1 cars are being fitted with increasingly tough safety structures, and more dramatic changes such as cockpit canopies are under consideration, it is likely the minimum weight will rise further. Colin Chapman’s maxim of “simplify and add lightness” increasingly seems to be a thing of the past.

Weight limit data sources: FIA Formula One Technical Regulations, various issues of MotorSport, various editions of Autocourse, Formula One: All the Races by Roger Smith, Colin Chapman: Inside the Innovator by Karl Ludvigsen.

114 comments on “Why F1 cars keep getting heavier”