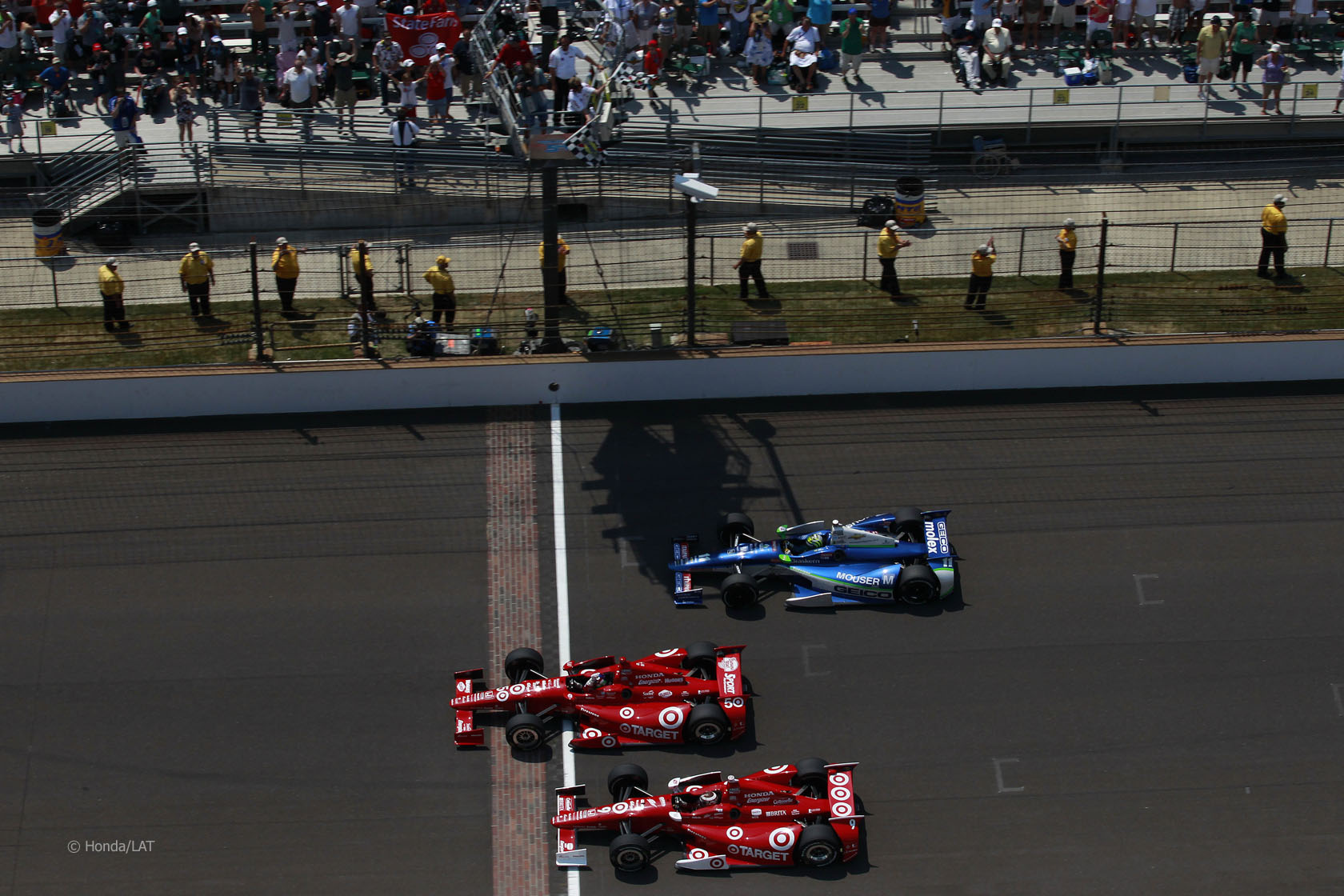 For fans of open-wheel racing this Sunday has to be one of the best days of the year. The blue riband races of the Formula One world championship and the IndyCar series fall on the same day.

Once the 22 F1 drivers have done their thing in Monaco it’ll be time for 33 IndyCar racers to take the start of the 97th Indianapolis 500.

The last two runnings of this great race have taken almost three hours to complete – and on both occasions they ended in drama.

Last year Dario Franchitti and Takuma Sato began the final lap side-by-side. But as they hurtled into the first corner Sato lost control and crashed out, leaving Franchitti to win.

That wasn’t a patch on the stunning twist at the end of the previous year’s race. Rookie JR Hildebrand was comfortably in the lead as he began his final tour, only to hit the wall at the last corner. While his three-wheeled car coasted to the line Dan Wheldon, making his first start of the year, nipped past to score a shock second Indy 500 victory.

Will the 2013 race serve up another classic? We’ll find out on Sunday as this classic race begins just a few hours after the end of another historic event – the Monaco Grand Prix. Not since Gil de Ferran’s victory for Toyota ten years ago has a car powered by anything other than a Honda won the Indianapolis 500. And you have to go back another year to find the last American manufacturer to power the winner of America’s great race.

Honda have had it all their own way in the intervening years. For a while they powered every car in the race but that changed last year with Chevrolet’s return. Although Chevrolet’s Ryan Hunter-Reay claimed the IndyCar championship last year, victory at the Indianapolis 500 is considered by many to be an even greater prize.

Chevrolet began this year strongly with James Hinchcliffe winning twice for them and Hunter-Reay scoring another. But former F1 star Sato gave Honda a win in the Long Beach Grand Prix and lead the points standings ahead of the biggest race weekend of the year.

There were plenty of surprises in qualifying for this year’s race – and a dream result for Chevrolet in their battle with Honda. Every car in the top ten places is powered by the American carmaker. Pole position went to the only driver in the field who runs his own team. Ed Carpenter claimed first place with a lap almost 4kph faster than last year’s pole position.

He may not drive for one of the top teams but he is a serious candidate for victory. Carpenter and won the last oval race at the end of 2012, another gruelling 500-miler at Fontana.

The identity of the next driver on the grid is an even bigger surprise. Colombian Carlos Munoz is making his first ever start in an IndyCar race for Andretti. He’s also racing in today’s Indy Lights support race where he also starts second. Team mate Marco Andretti joins him on the three-car front row.

Series returnee AJ Allmendinger put his car fifth on the grid ahead of Penske team mate Will Power. Hunter-Reay, who beat Power to the title last year in that thrilling Fontana finale, is seventh on row three.

Alex Tagliani is the first Honda-powered driver on the grid. Sato and Franchitti will resume their battle from last year on row six. The other two former F1 drivers in the field are on the row in front of Sato: Justin Wilson 14th and Sebastien Bourdais 15th.

F1 Fanatic Live will be running throughout the Indianapolis 500. Join us after the Monaco Grand Prix for every lap of the race which is due to start at 5pm UK time and is broadcast live on ESPN UK.