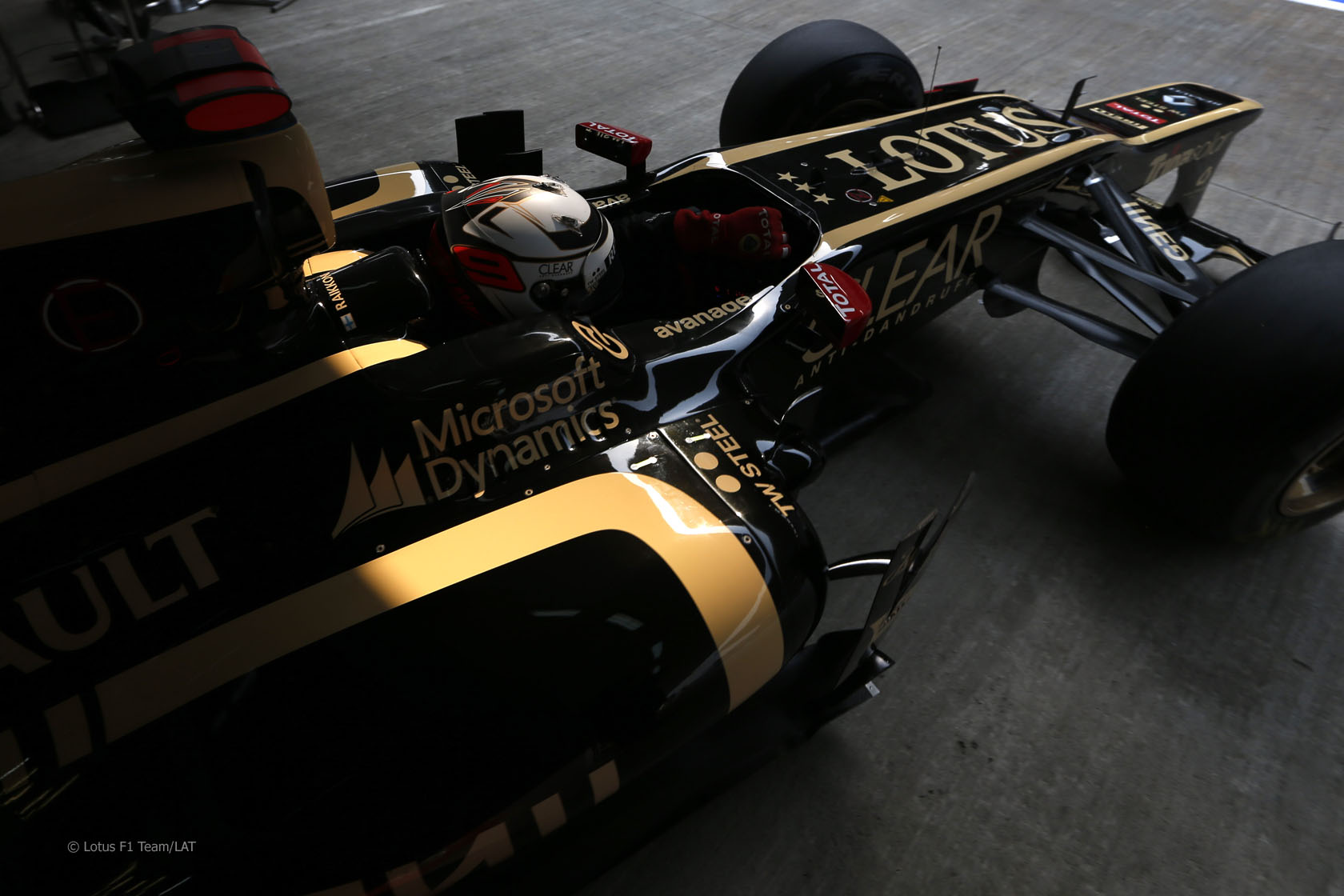 Kimi Raikkonen’s return to Formula One was one of the most highly anticipated developments ahead of the 2012 season.

How would he fare at Lotus? Would he be back at his the best, as he was when hunting titles with McLaren and winning one with Ferrari? And could he sustain his appetite for competition throughout F1’s longest season yet?

Happily, the answers to all these questions were positive. As the season unfolded Raikkonen gave little cause to believe his comeback would be anything less than a success.

That might not have seemed likely when he was ejected from the first qualifying session of the year in Q1 after mistiming his final run. But he made patient progress in the race and showed he’d lost none of his racing verve by taking three places in a frantic final lap.

Raikkonen got up to speed quickly with the tricky new generation of Pirelli tyres and only really got into trouble with them twice, in China and Monaco. Significantly, both those races came after he’d missed a significant amount of running on the first day of practice.

Even so China was the only race all year when he failed to appear in the points – impressive consistency which elevated him to third in the world championship. That he appears one place lower in these rankings is not intended as a criticism of him, more a consequence of the miserable fortune endured by one of his similarly impressive rivals.

Just four races into his comeback, Raikkonen was back on the podium. On this occasion failing to reach Q3 proved something of a bonus for him, as it gave him plenty of fresh tyres to attack the front runners with. This was arguably a win that got away – Raikkonen had one chance to pass Sebastian Vettel to win but admitted he picked the wrong side when zooming up behind the Red Bull.

This began a sequence of nine races in which he made six visits to the podium. He was reeling in leaders Pastor Maldonado and Fernando Alonso at the end of the Spanish Grand Prix, managed his tyres well for another podium in Valencia, and climbed from tenth on the grid to inherit third when Vettel was penalised in Germany.

But a comeback victory proved elusive. He had the pace for it in Hungary but after emerging from the pack he ended the race on Lewis Hamilton’s tail. In Belgium he started third and finished there.

Raikkonen’s season faltered slightly as the final round of flyaway races began. In Singapore he missed Q3 again and Grosjean was called on to let him by during the race. He spun during qualifying in Japan and was pipped to fifth in the race by Hamilton. But in Abu Dhabi he seized his opportunity to win, moving up to second at the start and claiming victory after Hamilton retired.

Was more than one win possible? The Lotus was fractionally quicker than the Ferrari and had Raikkonen qualified the car as well as Grosjean often did there were other races he could have won.

Although he qualified well at times there were times he came up short and other occasions when the car did. Such as at Silverstone where he qualified sixth despite a KERS glitch.

He ended the season with his 17th consecutive points score in Brazil, despite taking a costly detour during the race when he went off. It did, however, prevent him from completing every lap of the season.

Raikkonen delivered a comeback season worthy of his status as one of the six champions on the grid in 2012. He consistently got the most out of his car on race day, made few mistakes, and his firm-but-fair wheel-to-wheel racing with drivers like Michael Schumacher (Belgium, Brazil) and Jenson Button (America) was a joy to watch. He returned and it?óÔéĽÔäós like nothing has changed to him. Always reliable, the most consistent driver of the grid, grabbed an astonishing win and point out why he should have won more than the single title he has.
@Dimitris-1395

Raikkonen is one of my favourite drivers and out of the current crop, he probably has been for the longest time bar Schumacher. Still, his comeback at Lotus, which wasn?óÔéĽÔäót a great team in 2011, him being out of the sport for two years… I didn?óÔéĽÔäót expect too much.

He has been utterly consistent, scored points in all but one race and made little driver errors. His win in Abu Dhabi was a gift from McLaren?óÔéĽÔäós reliability problems, but well deserved.

Another year like this, and we?óÔéĽÔäóll be talking about the Vettel/Alonso/Hamilton/Raikkonen era.
Nick (@npf1)

Raikkonen could teach Schumacher a lesson or two on how to make a comeback in style. He got on terms with the car and tyres in no time and was fighting for podiums and wins as early as Bahrain.

Raikkonen was consistent and fast on Sundays but seemed to lack a bit of that edge in qualifying. If he can find some consistency in qualifying pace, he would be back to 100% Raikkonen form as we have always seen him in. He has shown that given the right machinery, he still has a championship left in him.
@Todfod

Notes on how the rankings are produced

The F1 Fanatic Driver Rankings are my personal view on how the drivers performed across the entire season. Drivers such as Jerome D’Ambrosio who only competed in a small part of the season are not included.

Each drivers’ performance in all of the race weekends are taken into account and summarised. For more detailed views of how they fared in each weekend refer to the notes produced for each Driver of the Weekend article and the driver form guides.

A selection of F1 Fanatic readers’ views appear alongside the rankings. The full rankings will be published in seven parts, with individual articles for the top five drivers, after which there will be a vote for Driver of the Year.

What do you think of Kimi Raikkonen’s comeback year? Have your say in the comments.