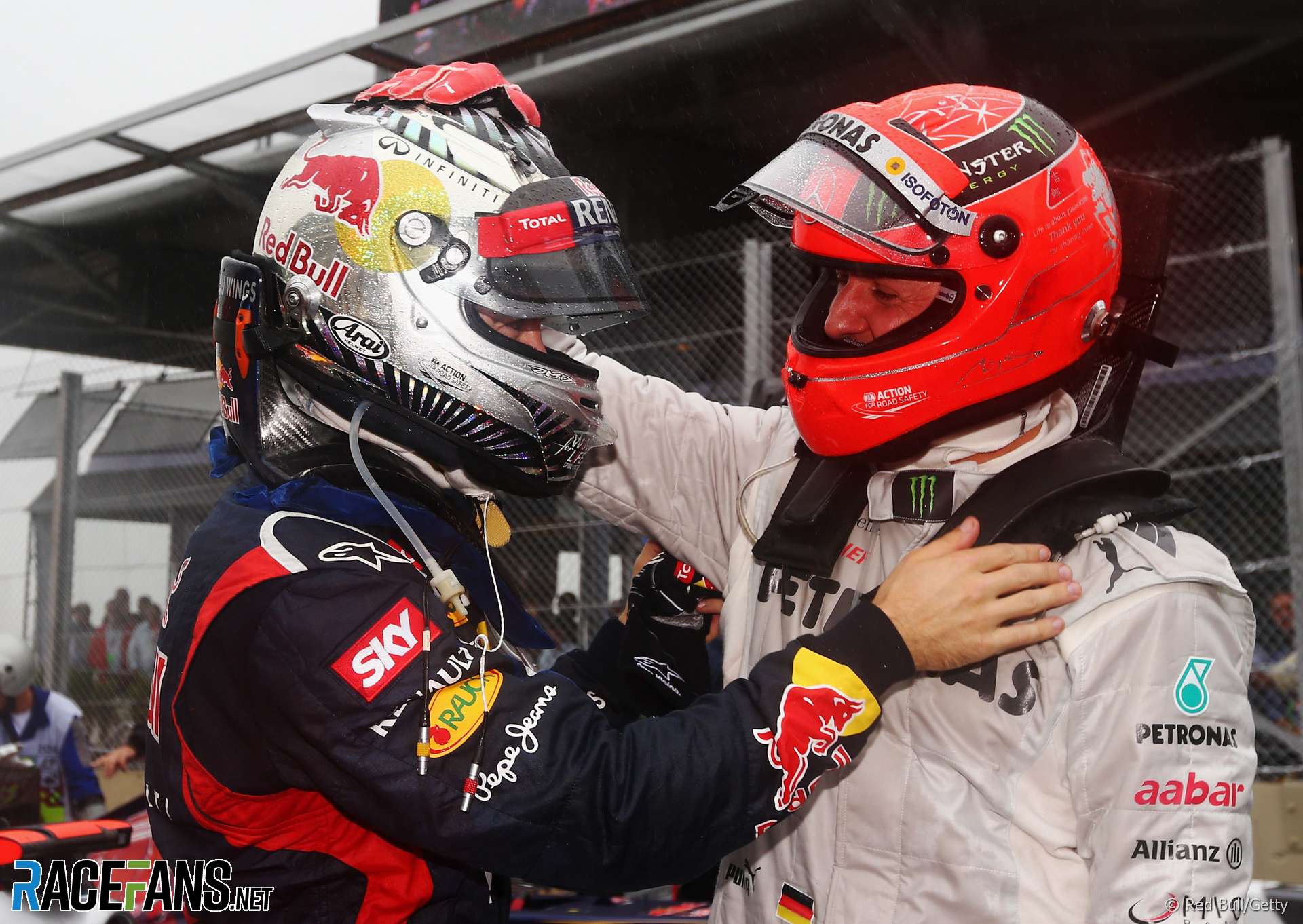 Jenson Button won a stunning race in Brazil in which the outcome of the championship remained in doubt until the final lap.

Although Fernando Alonso climbed to second, sixth place for Sebastian Vettel was enough for the Red Bull driver to clinch a third title.

It was a fraught race for Vettel who fell to the back of the field on the first lap but drove a gritty race back through the pack to seal the championship.

Vettel loses out in dramatic start

From the front row the McLaren pair made clean starts but behind them neither Red Bull got away well. Mark Webber closed out Vettel which allowed the Ferraris and Nico Hulkenberg to pass him around the outside.

Vettel’s situation got more serious when they reached Subido do Lago. Kimi Raikkonen took avoiding action to keep from hitting him but as the Red Bull turned into the corner Bruno Senna appeared on the inside.

The Williams driver was overtaking two drivers between him and Vettel, who appeared not to see Senna’s car alongside. The pair made contact – twice – leaving Vettel pointing the wrong way down the track.

The impact damaged the bodywork around Vettel’s exhaust and Red Bull were concerned it would overheat. But Vettel was able to continue – albeit now down in 22nd place.

Before the race began Ferrari had been hopeful that rain would arrive to level out the playing field. But when it did come it was as much to the relief of Vettel, as the drop in temperature eased the strain on his damaged car.

At the start Alonso had immediately passed Webber for third place – the minimum he needed to have a chance of winning the championship. But as rain began to fall he twitched wide at turn one, cutting across the new tarmac run-off area, sacrificing third to Nico Hulkenberg.

Webber was unable to take advantage of this opportunity to re-pass Alonso, and a few laps later Massa demoted the Red Bull driver a further position. This proved very useful for Alonso as the Ferrari drivers’ tyres cooled in the rain and the pair began to struggle.

Massa adopted a defensive stance behind his team mate and a warning about his driving was immediately conveyed by radio to Vettel. This was necessary as Vettel had carved through the field in doubt-quick time, and with others diving to the pits for intermediate tyres he soon had the Ferraris in sight again.

The McLaren drivers briefly swapped positions when the rain started to fall, but Hamilton regained the lead only to give it up again when he decided intermediate tyres were the way to go. In a re-run of last year’s Hungarian Grand Prix Button stayed out on slicks despite the drizzle, and took the lead off his team mate.

Hulkenberg also elected to chance it on his medium-compound slick tyres, but the championship contenders could afford no such gambles and were soon in for intermediate tyres as well.

“It is a safety car situation”

Vettel came out of the pits behind Webber and Raikkonen. The two Red Bulls quickly passed the Lotus and this time Webber offered little resistance to his team mate: “thank you Mark,” said race engineer Ciaran Pilbeam.

Massa had stayed on slicks but was easily passed by Kamui Kobayashi and a circumspect Vettel. Moments later Vettel took Kobayashi at the exit of Juncao. The pair had gone past yellow flags and yellow-and-red flags, the former forbidding overtaking. But Vettel began his move shortly after the pair passed a green light, and was drawing level with Kobayashi as they reached another yellow light. The stewards took no action.

Further ahead Alonso was making light work of the traffic. And at the front of the field Hulkenberg had sensationally caught Button’s McLaren and, on lap 19, passed him for the lead.

The weather continued to keep the teams guessing: while drivers were receiving messages telling them it was going to continue the track was already drying enough for them to abandon their intermediates. Alonso switched back to slicks followed by Vettel, who returned to the pits in sight of his championship rival.

By this point several drivers had been involved in incidents: Pastor Maldonado joined his team mate in retirement and was accompanied by Romain Grosjean, who crashed out at Mergulho, and Sergio Perez. Alonso complained about debris on the track, adding: “it is a safety car situation”.

The safety car soon appeared on the circuit, calling a temporary halt to what had been 23 laps of frantic action, with still more than two-thirds distance remaining. Hulkenberg and Button took the opportunity to pit for fresh slick tyres, and the Force India driver held his lead.

Behind them Hamilton’s disadvantage for making an extra pit stop was wiped away and the same went for most other drivers. Alonso held fourth ahead of Vettel, who was still on course to clinch the championship, followed by Kobayashi, Webber and Di Resta.

Within seconds of the safety car returning to the pits the action resumed. Vettel came under attack from Kobayashi and Webber – the latter ran wide but Kobayashi made the move stick. He went on to take fourth off Alonso, but only briefly, the Ferrari driver quickly taking the place back.

The safety car had put Massa back on the lead lap and as the track dried he quickly passed Di Resta. He demoted Vettel and Kobayashi too, taking up fifth behind his team mate and therefore was unlikely to progress further.

As the track continued to dry Vettel’s aerodynamic damage became more of a problem. He sat within DRS range of Kobayashi, unable to make a move on the Sauber. The loss of downforce also impaired his tyre life and as his lap times began to drop off the team considered bringing him into the pits.

There deliberations were impeded by a fault on Vettel’s radio which prevented him from being able to talk to them. This had near-disastrous consequences as the weather changed yet again. First he pitted for slicks, then returned for intermediates – but the team weren’t ready for him. He fell to tenth place, which was a serious problem as Alonso now had the podium within reach.

Hulkenberg lost his lead when he half-spun his Force India at Laranja. That allowed Hamilton, who had passed Button after the safety car came in, to retake the lead.

A few laps later Hulkenberg spied an opportunity to pass Hamilton when the leader was delayed in traffic. Hulkenberg went down the inside at turn one but the back end snapped away and he clipped Hamilton’s car. Front suspension damage ended Hamilton’s final race for McLaren.

With Hamilton out and Hulkenberg doomed to serve a drive-through penalty, Alonso now had a shot at second place. He took it despite staying out too long to switch back to intermediate tyres as the rain intensified, and nearly spinning at Curva do Sol. Massa got in front of him through the pit stops but wasted little time handing the place back.

By then Vettel had already recovered well into the top ten, eventually passing Schumacher for sixth place. But even at this late stage he could not afford to relax: a sudden retirement for new leader Button would put Alonso in the lead and Vettel would be one place shy of the world championship.

There was no such problem for Button, and the race had a slightly anticlimactic end as a crash for Paul di Resta brought out the safety car. He claimed his third win of the year and the Ferrari drivers joined him on the podium.

But there were no celebrations for Alonso as Vettel, sixth behind Webber and Hulkenberg, had done enough to retain the world championship.

Schumacher bowed out of F1 with a points finish for seventh, while Jean-Eric Vergne was promoted to eighth after a late spin for Kobayashi.

Kimi Raikkonen was only tenth after going off at Juncao and attempting to rejoin the track using the old circuit, which was closed off at one end.

Behind him the battle for tenth place in the constructors’ championship had been resolved with a final twist. Charles Pic, who will drive for Caterham next year, was passed by Vitaly Petrov in the dying stages. Petrov’s 11th place finish moved Caterham back ahead of Marussia in the final race.

Unfortunately for Marussia Timo Glock had been running in front of both when he was involved in an incident with Vergne which dropped him back. He came in 16th behind Daniel Ricciardo, Heikki Kovalainen and Nico Rosberg. The HRT pair were the last running drivers.

Brazil produced a suitably scintillating conclusion to an exciting championship. Vettel’s race engineer Guillaume Rocquelin admitted he feared his driver’s title hopes were lost after the first-lap collision. But an error-free recovery drive of measured aggression gained Vettel a deserved third title by the slender margin of three points.

Both he and Alonso deserve praise for their efforts this year. Alonso once again wrung all he could from his Ferrari and it’s doubtful he could have finished higher.

If a championship is valued by the quality of the opposition a driver faces, then Vettel can count this triumph as his greatest so far.